Majora’s Mask was one of the best games made for the N64, and although it didn’t get the praise that its legendary predecessor did, it was still well received and loved by many a Zelda fan.

It was no surprise that Ocarina of Time was remade when the 3DS launched, but fans never thought they would have to wait this long to play Majora’s Mask. The wait is over, and it has been worth it.

It has been 15 years since Majora’s Mask first launched, and Nintendo has been careful to maintain the charm of the original game while adding minor changes. It all still holds up: the gameplay, the 3 day limit to beat the game, the masks and their attributes. It all holds up, and I personally find that this title plays much better than the Ocarina of Time remake. With time, it appears as if Nintendo is getting better at remaking their old games. 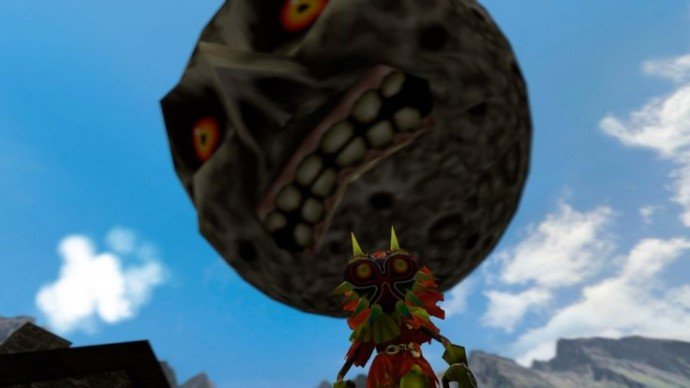 If you’ve never played Majora’s Mask, it may seem complicated when described. You get three in-game days to beat the game which can be altered by playing a specific song (time will either speed up or slow down, giving you more or less time to beat the game.) You won’t actually beat the game in the three given days, but will attempt to complete each dungeon within that time frame. Play the song that resets the game to Day 1 (keeping all dungeon and story progress intact), and you move on. Complicated? Perhaps, but you’ll be lost in the beautiful world surrounding the main hub, Clock Town, and you won’t care. That, and the fact that once you get going, everything is explained in time.

Changes were made to the game for this release, but most of them have been for the better. The Bank was moved from the rarely visited West Clock Town and moved to South Clock Town.
Nintendo also cut out the extra long cut scenes. Although a few seem to have been removed, I’ll only note the most important change. In each of the regions around Clock Town, and within the town itself, players will find a Deku Flower with a salesperson ‘living’ in it. In the original release, the first time you passed these flowers resulted in watching a long cut scene as the Deku salesperson arrives at his flower to tell you, frankly, that it is his Deku Flower. The same cut scene, albeit in reverse, is shown when you receive the deed from said salesperson.
I personally find that this title plays much better than the Ocarina of Time remake
This seems incredibly insignificant to point out as an important change; however, I remember purposefully avoiding these flowers to skip the cut scenes during my original play through in 2000, so it’s nice to see Nintendo rectifying that issue. It makes the game much more streamlined and enjoyable. These lengthy cut scenes – another one found at the Deku Palace – often cut into the flow of the game. This is no longer an issue.
Other changes are present that make Majora’s Mask more playable than ever. The Bomber’s Notebook that you receive to track all the side quests in the game is now presented in a drop down, standard “quest” menu, rather than the old mess that was the notebook. There is also an option to set alarms for specific tasks. No longer will you miss your 11 PM meeting in the inn!
Not every change in the game is accepted so readily like these ones.

Not Every Change is Welcome

The only gripe I have with this reboot are the boss battles. Boss fights have been made easier in my opinion, with the addition of large eyes pinpointing exactly where players are suppose to attack their foes. The boss fights were difficult enough to be enjoyable in 2000, so making them easier isn’t a welcome change in 2015.

There is very little to dislike about this remake. The charm of the original transfers nicely to this updated title, and playing on a handheld instead of a controller makes no difference. Sometimes I enjoy the originals over the remakes, but not in this scenario. The remake of the Legend of Zelda: Majora’s Mask is better in almost every way.