Legend of Zelda A Link Between Worlds Review

Legend of Zelda A Link Between Worlds

The Legend of Zelda A Link Between Worlds Review – Introduction

If you have ever played a game with a guy in a green costume, who is generally always sleeping at the beginning of his adventure, then you’ve probably played a Legend of Zelda game at some point.  Nintendo’s latest Zelda release for the 3DS has received much attention since being released, including a number of Game of the Year nominations from multiple prominent media outlets.  So what makes yet another Zelda game so appealing and fun?

Linked to the Past

A Link Between Worlds is set in the world of the Super Nintendo classic, A Link to the Past.  The maps in the two games are almost identical, and the gameplay is very similar.  A Link Between Worlds, despite borrowing heavily from its predecessor, stands alone just as well.  It is an automatic recommendation for fans of adventure games or lifelong Zelda fans.

A Link Between Worlds is set in the world of the Super Nintendo classic, A Link to the Past

Your task in A Link Between Worlds is to stop evil from spreading through Hyrule.  An evil sorcerer has captured the seven sages and Princess Zelda in hopes of resurrecting Ganon.  While this tale is all too familiar, there are things that make it fresh.

The addition to this game that makes it so appealing is the ability to turn into a 2D painting and scurry across walls, mountains, and hills.  You will use this ability a lot in your adventure.  After collecting three stones in Hyrule, you head to Lorule to save the sages and bring an end to the evil that is destroying both worlds.  You travel between the two realms via cracks in the wall by turning yourself into a painting and slipping into the cracks.  Lorule is much the same as Hyrule with a few notable differences.  Lorule is a much darker, drearier world, and certain dungeons can only be accessed by slipping through very specific cracks in Hyrule.

Unlike other Zelda games, in which you travel from one dungeon to the next in a linear pattern, A Link Between Worlds usually allows you to complete the game in your own way.  There are certain areas where you are guided to particular places.  When collecting the three sacred stones in Hyrule for example, you must complete the Eastern Palace first; however, you can choose between two subsequent dungeons, completing them in either order to obtain the final two sacred stones.  Once you get through the introductory faze of the game in Hyrule, and you enter Lorule, you can complete the dungeons in any order.

Fans of Zelda may be confused by this type of game play.  In other Zelda titles, you are brought along a specific path by design.  The game gives you an item in one dungeon which you need to enter the next, and so on.  However, A Link Between Worlds really allows players to do what they want, when they want to.  Instead of finding items in dungeons, you have the ability to rent and later buy permanently any item you want, including a bow, staffs, bombs, a boomerang, a hookshot, and a hammer.  These can be rented or purchased from a quirky traveler who sets up shop in your house. 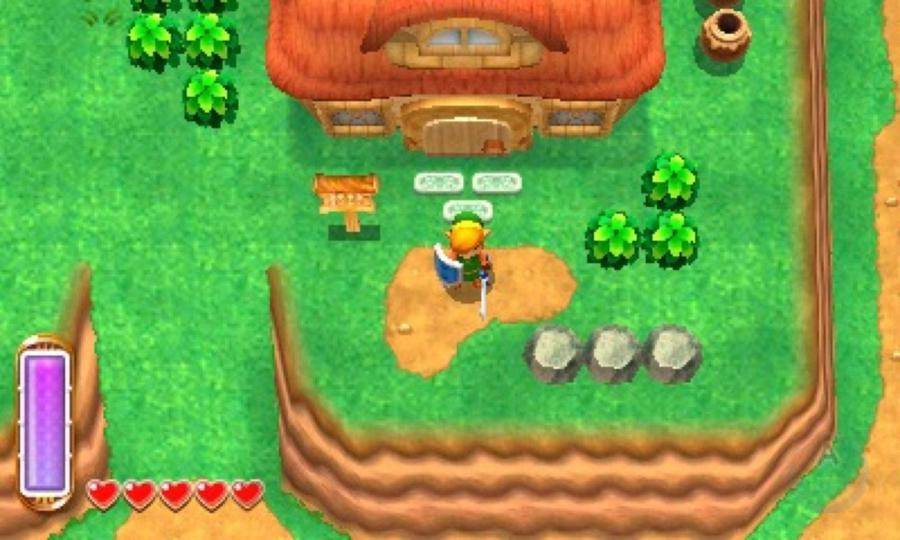 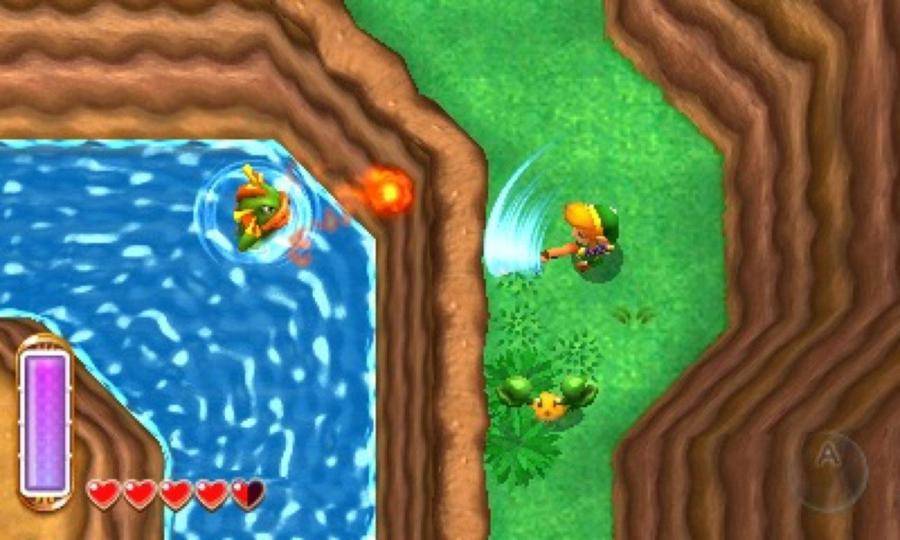 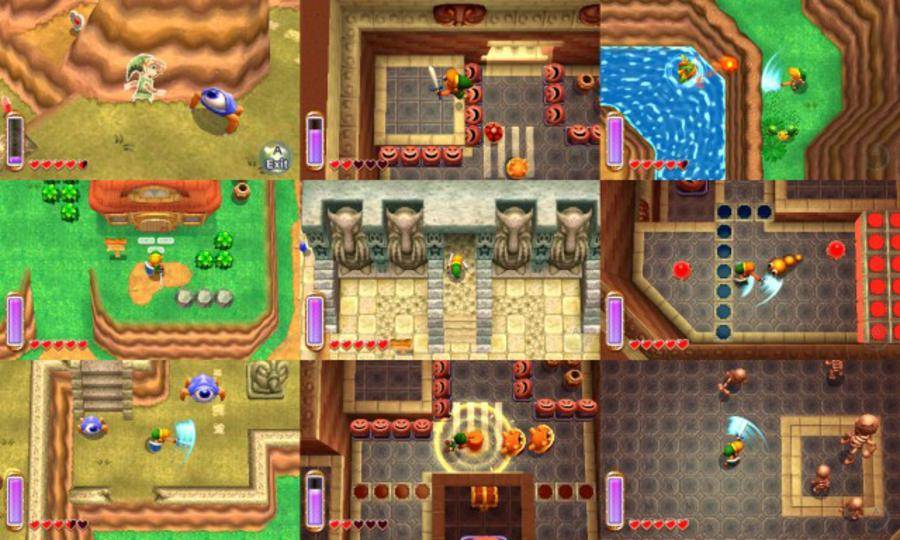 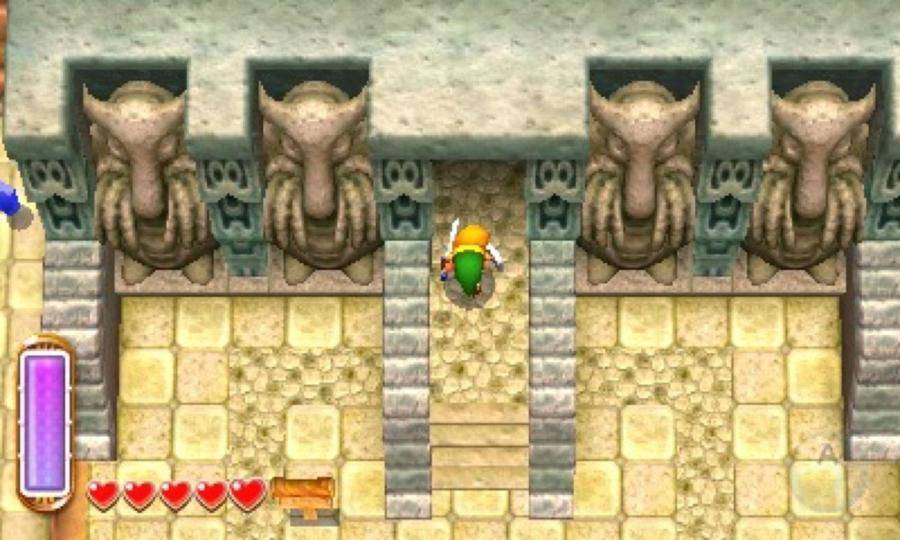 Renting items allows you to use something for a low cost, but the items will need to be rented again should you die.  This is especially infuriating when dying in a dungeon since you will need to trek back to your house to rent them again to finish the dungeon.  This was the only things that bothered me about this game; I feel this process could have been improved.  In the end, I only purchased items I knew I would use throughout: the hookshot, the bow, and bombs.

What makes this game really appealing is the dungeon puzzles

The story, while not always that engaging, does hold up well throughout.  What makes this game really appealing is the dungeon puzzles.  In later dungeons, the excitement comes from knowing there are multiple ways to solve a single puzzle, depending on which items you choose to use.  The ability to solve certain puzzles in different ways helps A Link Between Worlds be a more balanced game, treading carefully between overly easy and frustratingly hard.  I only died a few times in certain situations before I figured out exactly what I was supposed to do, and this usually was a result of trial-and-error when fighting bosses.

If you were to get really stuck, you receive Hint Glasses.  Hint Glasses, when worn, will highlight objects of importance around you.  Although I never used them on purpose, I did try them out; there is a sense of comfort in knowing you are never going to get frustrated in A Link Between Worlds.

The Legend of Zelda A Link Between Worlds Review – Conclusion

The colorful world of A Link Between Worlds will draw gamers in instantly.  While the familiarity with A Link to the Past is both a positive and a negative, Nintendo was able to change the game enough to make A Link Between Worlds look more like a new game, rather then an updated version of a Link to the Past.  The game looks fantastic on 3DS and the music is equally as amazing, utilizing a mixture of new melodies coupled with classic Zelda favourites.

The Legend of Zelda: A Link Between Worlds is easy to recommend, whether you are a seasoned Zelda veteran or someone looking to dive into the series.  In my opinion, it is the best game currently available for the 3DS.