So let’s say you’re a knight. Sweet gig, huh? You own your own land, have a squire to attend to all of the boring and trivial nonsense that you don’t feel like dealing with, and all those medieval ladies think that you’re just the cat’s pajamas. But what do you do when some disgusting monster grabs all of the local Princesses and relocates them to some giant monster infested tower?

You strap on your armor, grab your sword, jump on a rocket and get the job done.

Knightmare Tower is similar to a runner game, except that it’s more of a ‘climber.’ Each round begins with your knight sitting astride his mighty steed, a part played by a rocket in this instance. You tap in order to launch the rocket, trying to get the launch meter (which resembles the swing meter used by many golf games) to hit the maximum and give you a great start. After launch the rocket falls away and your rising speed begins to slow almost immediately.

It’s a good thing, then, that there are loads of monsters coming at your from the bottom of the screen for you to attack and gain some extra momentum. You move back and forth by tilting your device and can do a downward slash at an enemy with a simple tap. Each enemy you slice gives you a boost upward and builds your speed meter a bit. Chaining together enemies to fill the meter will result in a nice little speed boost that helps you gain even more distance. And you’ll need that distance, because the tower is inexplicably filling with hot lava that will end your run in no time if you can’t keep up the vertical momentum.

Your goal is to reach the top of the tower and save all the Princesses held within. At various heights you’ll bust through a room where a Princess is being held and free her. It’s a nice little mechanic that helps you keep track of how far you have been making it in on each go (typically the monsters and background are slightly different after each princess room) and once a Princess is saved she remains saved forever, giving you a passive upgrade that will help you out on future runs.

In between rounds, you’ll get to take all of the gold you’ve earned slaying enemies and saving princesses to buy upgrades. Better armor lets you take more damage, better swords kill stronger enemies faster, rocket upgrades give you better speed to begin your run, and more. It’s important to get these upgrades, and each time you do you’ll notice that it helps you get a bit farther than you got the last time. It’s a familiar system, but the developers have gotten the ‘make a run, buy some upgrades, go again’ sequence down to a science and I’ve had more fun with this one than with almost any other game of the type.

Knightmare Tower is different from your typical endless runner game, even though the premise is essentially the same

It may be worrying to some people that the game is largely controlled by tilt, but don’t be put off. This game has the tightest, most satisfying tilt controls that I’ve experienced in any game on iOS. I’ve never felt that a death was the result of the controls fighting me, they work simply and perfectly, allowing you to focus on the gameplay and making each run your best effort.

The hand drawn style of Knightmare Tower is a treat to behold. Monster designs are the perfect mixture of cartoony cute and gross, so you don’t mind slicing them in half (and watching those two halves plummet back down the tower) to gain your speed. It’s an incredibly colorful game and reminds me a good deal of the Saturday morning cartoons that I enjoyed as a child. 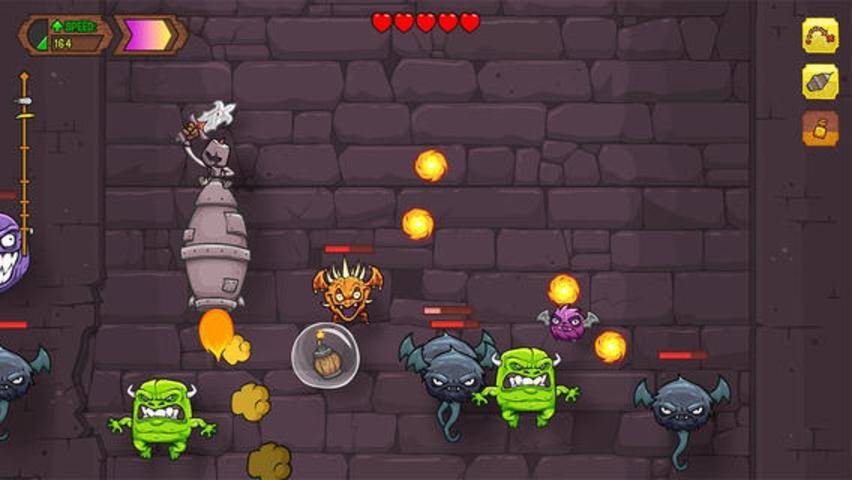 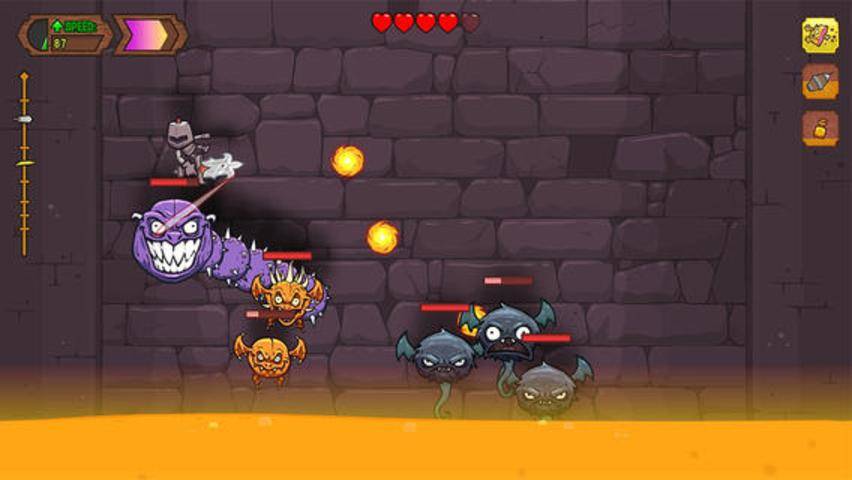 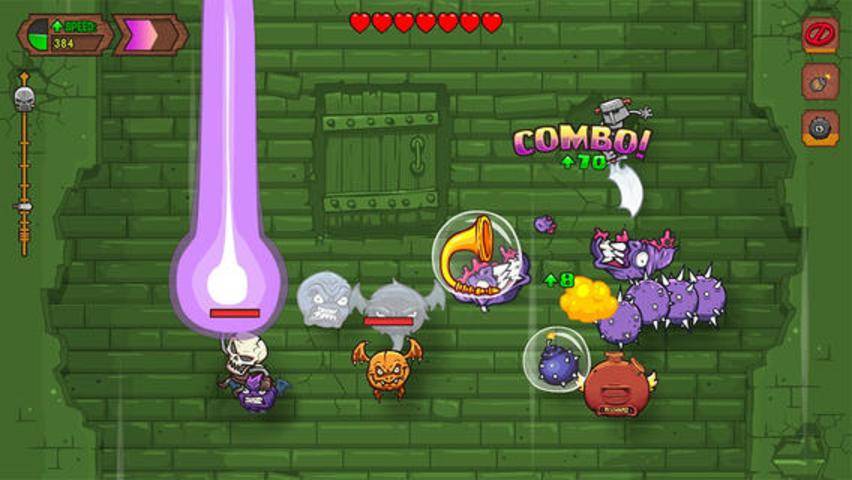 It’s great that your knight starts out looking like a bit of a bum, but each purchase of an armor or sword upgrade actually gives your character better looking armor and a more effective looking sword. The art direction is best described as ‘whimsical’ and the way the game looks reminds me a bit of Castle Crashers. I defy you to look at Knightmare Tower and not be impressed with the visuals. The only thing that is a bit disappointing is that there are really only a handful of monster types and the stronger versions of them just have a different color scheme and more health.

From the moment your medieval rocket blasts off, the sound will have you fully absorbed in the world of Knightmare Tower. There isn’t much to the audio apart from some decent tunes and the reassuring sound of swinging your sword and cleaving a fat little gargoyle in half, but once the mood is set you’ll find that all the sound effects complement the action perfectly.

It would be fair to say that, like most nearly every iOS game, the sound is the least important part of the experience, however. If you don’t want to wear headphones just to hear monsters getting sliced you won’t be missing anything crucial. The effects and music are just a nice little bonus on top of a great gameplay package.

Knightmare Tower is different from your typical endless runner game, even though the premise is essentially the same. The graphics, controls, upgrades, and fast-paced gameplay all make you want to keep coming back again and again to buy that next upgrade and save the next Princess. If you pick up Knightmare Tower, you might lose a few days of your life to the endless pursuit of generating vertical momentum through monster slaying. And you’ll be having so much fun that you won’t even mind.