Garfield has eaten too much – as always – and has decided that he needs to take a nap – as always. He’s not likely to get an easy sleep, however, because as soon as his head hits the pillow, he’s transported to a mysterious dream world where he can fly by flapping his arms, collect flying lasagne, dodge UFOs and pay exuberant prices for costumes that don’t actually matter. Welcome to Garfield’s Wild Ride.

Yes, this is one of those games. Decent enough in and of itself, but with in-app purchases through the roof.

Garfield is actually quite a decent mover, when he puts his mind to it. Set on a 2D plane, Garfield will run constantly forward (albeit quite slowly at first) and it’s up to you to help him dodge obstacles, collect coins and grab lasagne. To do this you’ll need to help him fly. 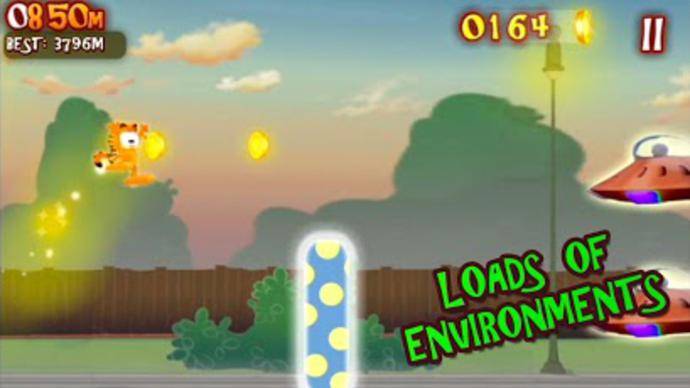 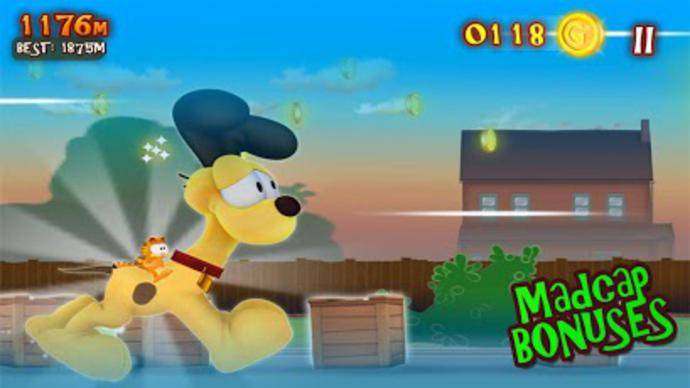 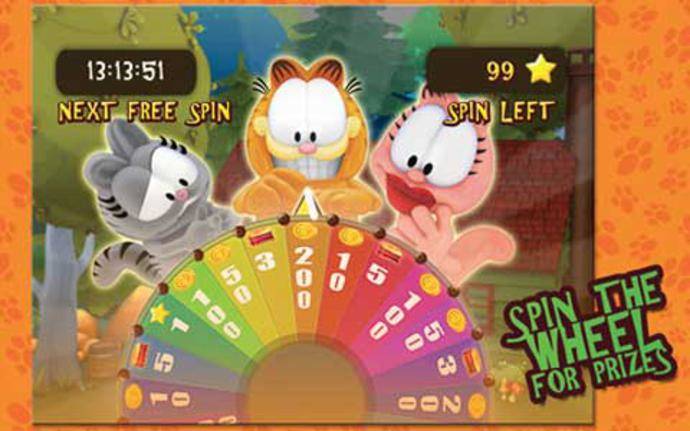 Your only real interaction with Garfield and his world will be touching and holding the screen in order to make the fat cat start flying. When you let go, he’ll drop to the ground. Like any endless runner game, the challenge is in doing the right thing at the right time, balancing risk and collecting coins as you go.

There are a lot of coins, too. A decent run will net you a couple of hundred coins a level, and by completing three missions – run so far on the ground, collect so many lasagne, use a special move so many times – you’ll get another bonus influx of coins.

Garfield’s Wild Ride is a paid app. It’s only $1/£0.69, so you’re not paying much for it, but it makes the free-to-play footprint of this game even more surprising. As soon as you load the app, you’ll be met with access to Garfield’s Shop, which houses a set of new costumes and backdrops for your Wild Ride.

Only the most poker-faced of developers would be able to say without smile that everything in Garfield’s Wild Ride is unlockable through hard work. While technically true, the “Jungle” theme comes in at 100,000 coins, and you’ll be lucky to get 300+ each game. Completing missions will knock that amount up a little, but you’ll still mostly looking at around the 1% mark, and even then you’ll have to do quite a lot of work to get that 1%

If you want to reach that amount more quickly, you can pay £8.99 for a million coins and unlock both themes in a matter of seconds. Else, there’s a 69p charge for a permanent multiplicator, which doubles the coins you collect.

Unlocking everything – costumes, themes, special FX – will take a very long time or an awful lot of money.

The music is fantastic. I’m too old now to access the dusty parts of my brain that remember such things, but I’m unsure whether the soundtrack is directly from the TV series/films, but, no matter if its old or new, it sounds great and really adds to the Wild Ride ride. The main theme sounds like something from Saturday Night Live, but each and every song feels like it deserves its place. It’d have been nice to be able to select songs specifically, but I’m guessing there’s not enough variety for that.

Graphically, Garfield is decent. Characters walk along in the background, Garfield himself is nicely animated and the backdrop itself, while hardly ever hugely varied, is more than passable. Even at faster speeds, it works well.

There’s not much depth to Garfield’s Wild Ride. You move, slowly at first, to the right, dodging obstacles and collecting coins. That’s it. That’s everything you’ll get for your dollar. It is fun, surprisingly so when built around so simple a premise (as opposed to Sonic Dash, which is similar but far more complicated). That’s all that matters when it comes to the gameplay, and Garfield’s Wild Ride surpasses expectation.

The shop stuff is pretty terrible and puts a mark on an otherwise decent game. I’d have perhaps been more forgiving had Garfield been free-to-play. Then again, considering the high cost of most things in Garfield’s Shop, perhaps I wouldn’t.

Garfield’s Wild Ride is a must play for people who enjoy the endless runners, and should definitely be considered if you’re looking for something to play for a short journey or between other tasks. Just make sure, no matter how tempted you are, to ignore the “more coins” button. In the words of a million Star Wars fans, it’s a trap.