The story behind Vlambeer’s Ridiculous Fishing is almost as interesting as the game itself – a frustrating, occasionally inspirational story about an indie developer fighting a ‘clone war’ against another title that essentially stole the heart of their fishing game. But after three years in development, the Dutch developers finally released their arcade fisher to the App Store, where praise was rightfully heaped upon it: Ridiculous Fishing is the best iOS game to release so far in 2013.

Like most great mobile games, Ridiculous Fishing takes a very simple gameplay mechanic and layers it with aesthetic style and intricate progression. As Billy the fisherman, players travel to different locations (accessed through Billy’s iPhone-like device) and drop reels in the water, navigating around fish on the way down by tilting the device. At some point (either by bad luck or by reaching the bottom), the lure will become ensnared on a fish, and the fishing line will start retreating to the surface. The objective is then reversed; the goal is to pick up as many fish as possible, shooting them out of the air with Billy’s weapon as they plummet it back to earth. 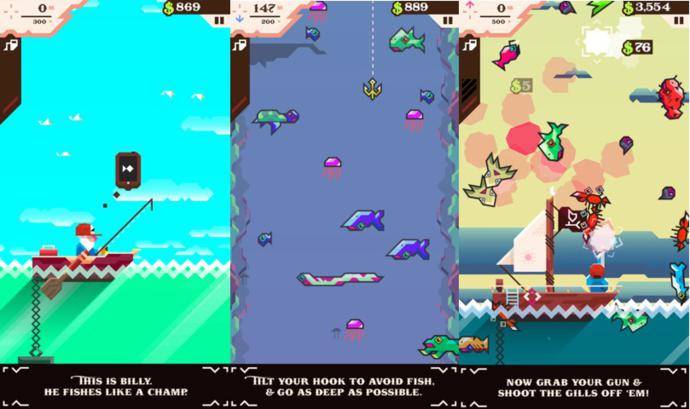 Three simple phases of gameplay – but there’s enough variety to each round that the game doesn’t quickly lose its luster like so many App Store counterparts. Shooting fish earns money to spend on upgrades, which range from longer fishing lines, to deep-sea lamps and a wide variety of weapons to annihilate the gilled creatures with. It’s not simply superficial progression, however: there are a total of five environments to fish in (one endless), unlocked as players catch a wider variety of fish species (all of which are kept track of in a helpful Fish-O-Pedia). Some fish only dwell at certain depths, and others will only appear at certain times of the day; if there’s one realistic aspect to Ridiculous Fishing, it’s capturing that exhilaration of finally capturing that elusive exotic fish.

Outside of a bit of grinding needed to earn some upgrades about two-thirds of the way through the game, Ridiculous Fishing is one of the most fluid game experiences I’ve had on iOS, both in how the game actually plays, and how it progresses from the first sea to the last sea, very rarely feeling like the game’s padding its longevity by throwing upgrade prices out of whack.

The lack of in-app purchases helps this feeling quite a bit: just the presence of them (especially in paid games like Ridiculous Fishing) create an imbalanced atmosphere from the word go. It gives players the feeling that they’re being arbitrarily held back from enjoying the game in its fullest, something the game completely avoids by refusing to include them – and Ridiculous Fishing is better for it, confident in its ability to provide replay value by a constantly-evolving experience, rather than a financially inhibited one.

Most importantly, Ridiculous Fishing is just a ton of fun to play. I’m never a big fan of tilt controls in iOS games, but Ridiculous Fishing’s implementation of the tilt mechanics (and technical execution, in terms of sensitivity) is what makes the experience so great. Throw in a lot of wild tapping at fish flying through the air in slow motion, and I don’t see how anybody could not have a ball with this game.

What I love about Ridiculous Fishing is how creative it is on every level, none more than the game’s visual/audio experience. Just look at a screenshot of the game’s gorgeous, sun-soaked portraits of Billy relaxing on his boat, or the dozens of unique, cel-shaded aquatic life designs. Simply put, it’s a beautiful game that utilizes very popular aesthetics (cel-shading, pixelated graphics) and combines them into this vibrant world of retro-flavored landscapes and a funky undersea metropolis.

Ridiculous Fishing is also the rare casual, arcade-style game that is worth playing with the sound on: the chip-tune flavored, layered soundtrack is an absolute joy to listen to, whether diving for fish or just sitting at the home menu. I do wish there were a few more tracks to listen to – which I suppose is a disappointment, but also speaks to how great the included arrangements are, leaving me wanting more of the game’s layered, upbeat sounds.

There aren’t many games I could recommend to anybody I knew with an iOS device – people’s tastes these days are so fragmented and specialized, it’s hard to find one title that both my casual and dedicated gaming friends would enjoy. Ridiculous Fishing is definitely one of those titles, a game that can be played and loved five or 50 minutes at a time, an endlessly addictive combination of mechanics and aesthetics executed to perfection.