The words “console quality” get thrown around way too often in the mobile game-o-sphere. I’ve been guilty of it, too: desperately clamoring for a bar-raising iOS game, we’ve been all too-willing to slap a AAA-tag on whatever good-looking and somewhat entertaining title and laud it as redefining what a mobile game is. Deus Ex: The Fall is the latest game to enter this conversation, a recently-announced FPS with RPG elements that acts as a prequel to the Deus Ex: Icarus novel. Don’t get me wrong: this is not some shoddily-constructed mobile cash-in: it’s a thoroughly playable stealth-based shooter, but when it comes to providing gamers with challenge and entertainment, it falls woefully short of what anyone would consider worthy of the much-maligned “console quality” moniker.

Impressively, the basic framework of Deus Ex remains the same in The Fall: people are up to some shady things, and players control a character trying to stop it, approaching every battle scenario with a unique strategy. All of that has made its way into The Fall: players will crouch behind walls, shoot crossbows from cover, collect exposition-stuffed journals, and find powerful upgrades to weapons and themselves along the way. It’s all there: but slowly, the game exposes itself as a title with no new ideas or an engaging story to tell. 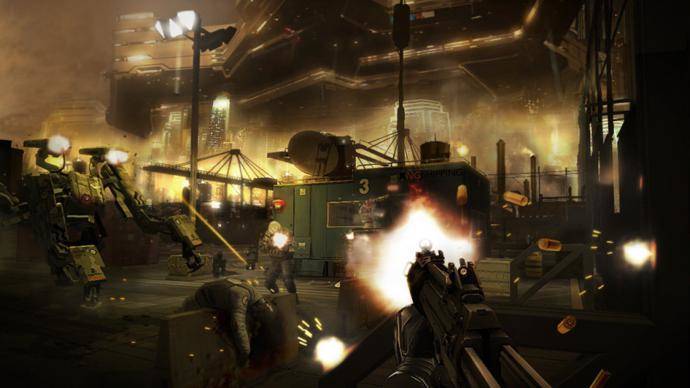 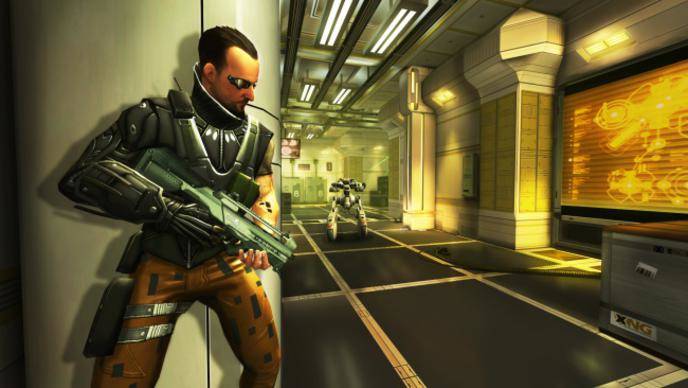 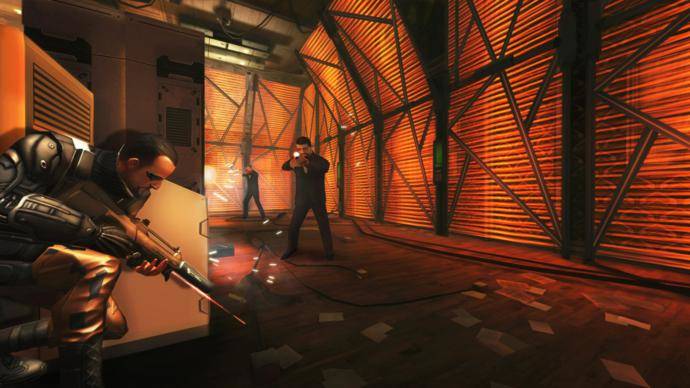 The first problem to crop up is with the game’s AI: it’s remarkably stupid, to the point where enemies would detect me, find me, shoot me twice – and then just look around, waiting for me to take them out. Given the game’s complicated tap-and-swipe filled control scheme, it’s understandable that the game’s AI might be dumbed down a little from console versions. But even admitting that concession, the AI in The Fall are dumb, reducing the battle scenarios to a repetitive approach.

Enemies would detect me, find me, shoot me twice - and then just look around

Like Deus Ex: Human Revolution, players are encouraged to approach each situation uniquely: in The Fall, players can advance using stealth, their hacking skills, brute force, or some combination of both. The augments players find plays a big role in this variety, allowing for customization focusing on someone’s particular strengths. However, the dumb AI and predictable level design removes a lot of the game’s brains, exposing the rudimentary level designs and revealing the best strategies almost instantly.

When it comes time to execute one of these plans, the game really falls apart: shooting or taking down one or two enemies can be a fun, stealthy experience – but with so many inputs and buttons to remember, frenetic situations become unmanageable, a hectic exercise in camera-spinning to find perspective. That’s not to say the controls don’t work well: but with taps, swipes, and a half-dozen buttons on-screen, the careful manipulation of situations the game’s mechanics rely on don’t translate efficiently to game without a controller (c’mon iOS 7 get here with your controller support already!).

In the broadest terms, Deus Ex: The Fall looks and sounds great: high resolution textures, full voice acting, cut scenes… the game has the works, certainly one of the upper-tier iOS games in terms of ambitious presentation. But browned-out colors everywhere, lots of repeated character models, awkward animations, and a cliche-ridden story (Ben and Anna continue to fight Namir and the Tyrants) – and it’s hard to see why even hardcore Deus Ex fans would get excited about the game.

The Fall is definitely one of the better, deeper first-person shooter experiences on iOS.

It feels like a narrative that’s going through the motions through the game’s five-six hour runtime: there’s no emotion, sense of wonder or discovery, or even any dramatic moments contained within the events of The Fall. Cardboard characters with monotone voices deliver trite dialogue to a cast of characters that never tries to make a philosophical musing about society or a connection to the audience – and most of all, there’s no feeling of choice (and the morality attached to it), which for me is the thing that makes Deus Ex different.

Despite its lengthy campaign and ambitious technical aspects, Deus Ex: The Fall was a game I forgot as soon as I put it down. It’s like a summer blockbuster: full of moments that make you say “cool!” but none that make you think – and more importantly, often crinkle eyebrows in confusion or disdain (like the discovery of the game’s currency being available through IAP). The Fall is definitely one of the better, deeper first-person shooter experiences on iOS (with a well-designed control scheme): but in reality, that’s not saying a whole lot, at least not yet.