For the most part, iOS and Android ports of board games are pretty straightforward, relying on the convenience of having classic tabletop titles without all the plastic pieces, dies, and paper objects needed for the physical product. Warhammer Quest is a different kind of digital interpretation, taking the multiplayer board game and transforming it into a enjoyable, but familiar-feeling tactical dungeon crawler.

Warhammer Quest was developed by Rodeo Games, and builds on the basic framework from their popular strategy series Hunters. Players familiar with that series will recognize the top-down perspective and tile-based dungeon construction, replacing the futuristic war art and inserting a traditional fantasy medieval setting, with dimly lit corridors and plenty of orcs, rodents, and spiders to fight along the way.

Jumping into a dungeon and fighting said monsters is pretty straightforward: after selecting four characters to take into battle (there are four default characters, and three unlockable for $2.99 a piece), players begin traversing dungeons in typical style, moving characters, ending turns, and battling enemies, until reaching the end and completing whatever objective is at hand – all in pursuit of the rarest loot, of course. 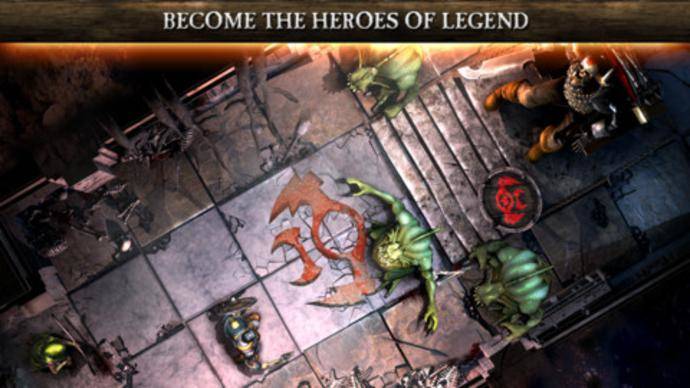 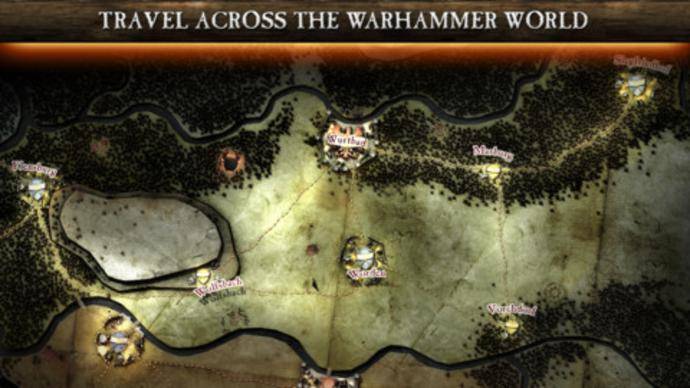 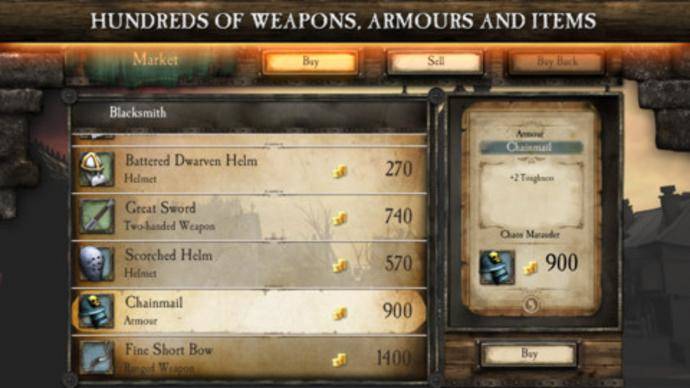 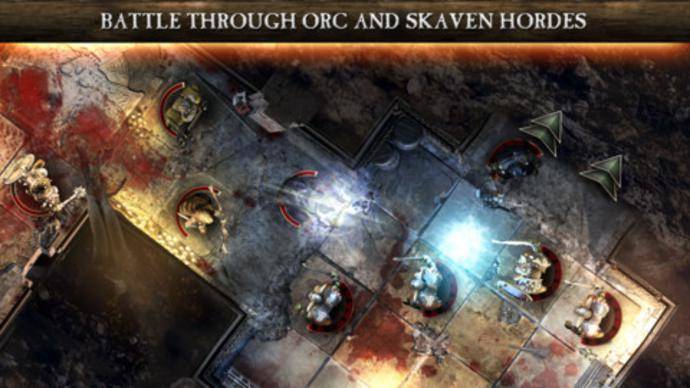 When it comes to being a strategy game, Warhammer Quest is technically solid, but fairly barebones – there isn’t a lot of variety to dungeons except visual look and some narrative context (told through text passages shown as players enter dungeons or new settlements). There’s definitely some distinct behaviors to the different classes at a player’s disposal, but the formula of each dungeon is basically the same, with the toughest situations seemingly arising out of random circumstance (like when eight spiders ambush players during a boss fight, or a random encounter whilst traveling siphons a large amount of money from your funds) rather than unique encounters, which challenge players to think outside the box or approach a situation with a different attack plan.

Of course, a loot game is only as good as its treasure – and although there is plenty of good weapons and armor to find (accessed by turning the device into portrait mode, a handy little feature to keep the screen uncluttered), there really isn’t ever an overwhelming sense of power, even when finding or purchasing a rare piece of gear. Maybe this is because of the ability to buy gold in game (thus negating the need to grind through dungeons to earn money), or maybe it’s the underwhelming sense of accomplishment when completing objectives for said loot. Whatever it may be, it keeps Warhammer Quest from having those exciting moments of completing a dangerous, lengthy dungeon to uncover a rare and powerful item – it will certainly scratch a dungeon looter’s itch, but does so without much fanfare or excitement.

That’s not to say Warhammer Quest is imbalanced in any way – it’s a perfectly enjoyable strategy title, it just lacks the innovation and atmosphere the source material provides it. All of the game’s mechanics feel pretty boiler-plate; without anything to layer on top of that experience, Warhammer Quest doesn’t quite separate itself from the rest of the genre as one might hope.

Warhammer Quest looks exactly how it plays: smooth and enjoyable, but lacking in character, despite the dynamic lighting and dark, foreboding corridors of its dungeons. There just isn’t a lot of unique style to be found – though that’s not say the game looks terrible by any means. Everything is cleanly animated and rendered with high-definition assets: it’s just there isn’t a ton of personality in said assets, except when arriving at new settlements on the world map, which triggers a very Game of Thrones-like sequence to introduce the town and its look, building from the ground up like a pop-up storybook animation.

The game’s soundtrack is also what one might expect from a game stooped in fantasy: lots of majestic horn blares, dark strings, and repetitive sound effects when a player or enemy gets attacked. The soundtrack is actually quite pleasant, predictable but never overwhelmingly cliche – though I do think the game could use a few more arrangements for fighting sequences (if there’s one bit of music that gets repetitive, it’s the in-fight piece) to really round out its sound.

With over 20 hours of dungeon crawling at a player’s fingertips, there’s certainly a lengthy strategy experience to be had in Warhammer Quest – and with the ability to level up characters and unearth legendary loot, Quest more than provides the motivation for players to trek through the main campaign – and the DLC campaign included for $4.99, which adds an entirely new world of enemies, settlements, and regions to experience, more than worth the price for people who find themselves engaged by the world of Warhammer.

In the end, I just wish there were more distinctive characteristics to the game. It plays great, looks and sounds good, and the touch screen controls are responsive and easy to use – but there’s no signature touch to distinguish it from the its genre counterparts, making Warhammer Quest a fantastic game for novice dungeon explorers to play, but another nondescript entry for the hardcore crowd.