Star Wars: Knights of the Old Republic is one of the touchstone RPG’s of my life. It’s the first BioWare game I had ever played, having missed the large majority of them as a person who spent most of my time on consoles as opposed to PC. Thinking back, it might even be the first proper western RPG I played as I spent most of my RPG hours playing games like Final Fantasy and Dragon Warrior. Who’d have guessed at the time that a game with the Star Wars license would be so essential to the hobby?

With KotOR (as it is known) making its way to iPad, a whole new generation of players have an opportunity to play one of the great RPG’s of all time, and what is easily the greatest Star Wars game ever made.

Knights of the Old Republic is the game which laid the foundation for the Mass Effect series, but set in the Star Wars universe. You’ll make your character, choose your class, walk around having loads of conversations while gaining Light Side or Dark Side points, and getting into some excellent tactical combat. The most noticeable different between KotOR and Mass Effect is the combat system. Where Mass Effect, particularly the second and third installments, have evolved to have more of an action combat feel KotOR is very tactical. You’ll see similarities to the combat system from the first Dragon Age game, if you’ve had the opportunity to play it. 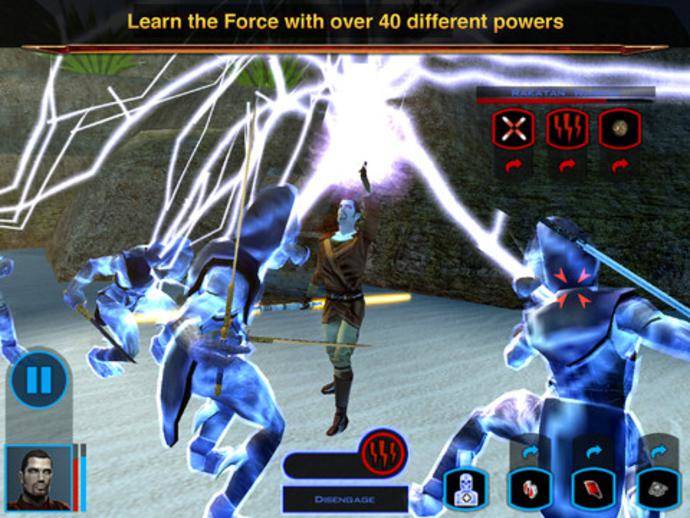 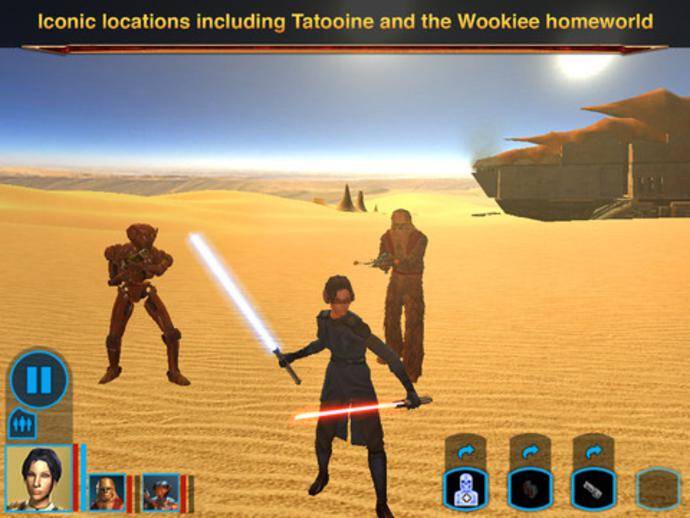 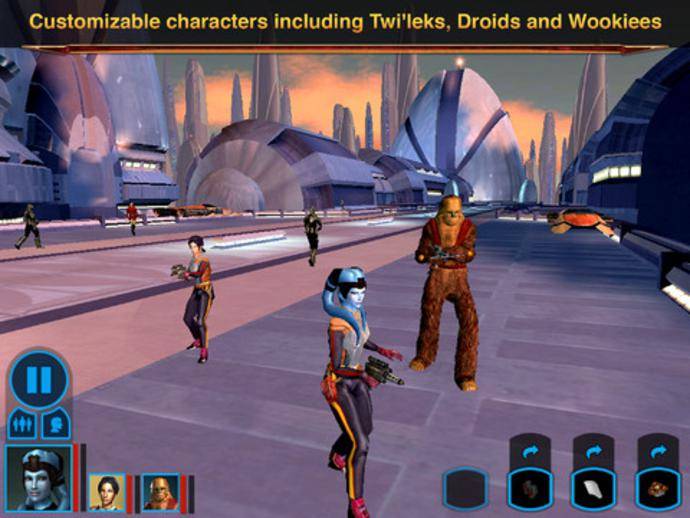 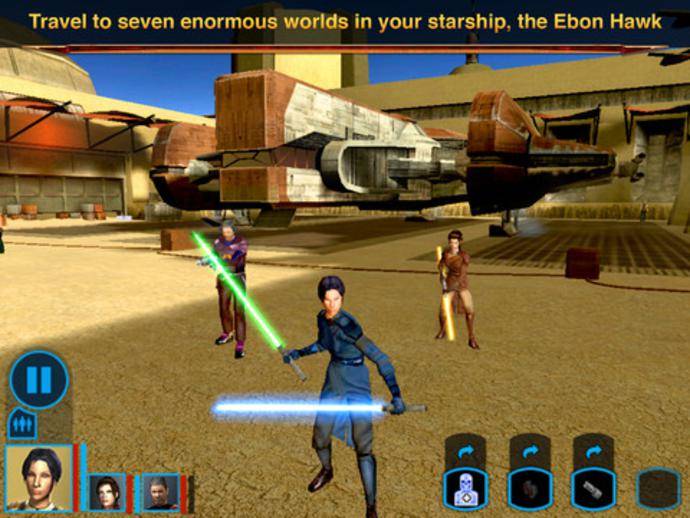 When an enemy is spotted, the game is paused. At that point you are able to issue commands to each of your party members, and once you have queued up a number of abilities and items for each character you un-pause the game and  the actions take place in sequence. The system is based essentially on the Star Wars version of D&D rules, so all of your attacks are based on die rolls, which are taking place under the hood. Overall, the combat can be fast and fluid with you switching characters on the fly and inputting commands as you need them, or slow and tactical as you pause frequently to take all enemies into account and queuing up your master plan before watching it all go off on its own.

As you may expect, you’ll eventually become a Jedi and get access to a wide variety of awesome Jedi powers depending on whether you are predominately Light or Dark side. As is often the case, the Dark side has a ton of awesome damage powers and involves solving all problems the quick way (read: kill everyone) while the Light side gets a  number of healing/disabling skills and often involves you making peace between different people instead of just murdering everything that moves. Depending on which way you go, the game has a completely different ending, so it’s definitely worth it to give the game two plays. You’ll find enough to do on each side that the playthroughs will seem completely different and fresh if you do decide to go back.

Many people will be wondering about the controls in the game, being on iPad. I’m here to tell you that the game is perfectly suited to play on the large touchscreen. Merely swiping from side to side turns the camera, and a swipe-and-hold in the forward direction sets you to running. Conversations just have you tapping on the response that you wish to choose, and combat works great by tapping the enemy you want to attack and then just tapping the icon for the skill or item you wish to use. Occasionally you will have small camera issues, but overall the controls work better than I ever expected and were never stopped me enjoying the game.

The graphics in the game are largely the same as they were on the original Xbox ten years ago. You shouldn’t be expecting something with the graphical fidelity of a game like Infinity Blade 2, but you’re getting a huge RPG full of player choice and a storyline that will take probably a minimum of 32 hours if you are rushing your way through. If you are used to playing games on high end PCs, or current gen consoles you’ll likely notice that some of the textures look dated and the lip syncing doesn’t really match up all that well. You’ll be having such a great time playing the game that the graphics will likely never cross your mind.

Unlike the graphics, the audio in KotOR is top notch. From the brass section kicking in with the theme song during the opening text crawl to the snap-hiss of a lightsaber igniting, KotOR nails the sounds of the Star Wars universe like few other games manage. Like most of BioWare’s recent game, The Old Republic, the voice work is top notch and really adds personality and depth to the characters that you’ll be interacting with during your time cruising the galaxy. Wear headphones and during hectic battles you’ll get to enjoy the sounds of swinging lightsabers, blaster rifles and pistols being fired back and forth, thermal detonators blowing enemy Mandalorians to ribbons and more. The Star Wars films have some of the most memorable sound effects I’ve heard, and KotOR nails them all.

The price point of $9.99 may seem a bit high if you are used to paying $2.99 or less for games on the iPad, but I can’t stress enough how fundamental this game is. If you like Star Wars, RPG’s, tablet gaming, or even just video games in general, Star Wars: Knights of the Old Republic is impossible to pass up. Ten dollars buys you more quality game time than you might find in three different full price games currently sitting on store shelves. KotOR is one of a kind in the best possible way, and no amount of other casual games or in-app purchases will give you the same return on investment. Buy it immediately, if you have any sense at all.