Shelter is a zombie-themed card game for mobile devices. Card games seem to be really hot now and zombies are never not the flavour of the week, so the combination of the two is something I’m amazed hasn’t happened on this scale before. Shelter takes both ideas and pushes them to their max, mixing deep card mechanics with a Walking Dead inspired graphic novel style of storytelling.

As an idea, and in many parts of the gameplay as well, Shelter is just as exciting as it should be. Occasional issues and a repetitive nature, however, may be too much for more casual card fans.

Running is not an Option

We’ve seen it a million times. Love ones are separated. Towns are decimated before authorities have time to react and a few dozen survivors are all that’s left before the extinction of the human race. It’s not so much the general idea that matters now, but the way in which it is delivered. Whether with humour or blunt darkness, the zombie apocalypse has happened a million times, and in a thousand different ways.

Thankfully, Shelter manages to be quite original with the way the story is delivered. Shown in a comic book/graphic novel style, the artwork is absolutely fantastic and the dialogue, while it’s not going to win any prizes, decent enough that you come to care about the adventure. While other games have tried to go down the comic book route, Shelter does it right, and for people that love artwork of this kind, I can’t recommend it enough. It’s not just the artwork itself that’s interesting, but the whole package. The music is decent enough that it manages not to distract, but it’s the use of sound effects and vibration that are most immersive. They really manage to open things up. 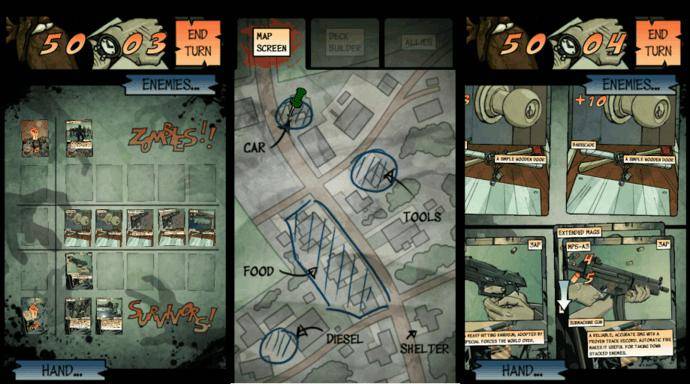 The gameplay is less inspired, but still well designed. There are over 100 cards to use, each which offer a unique advantage or use. You’ll need to play tactically if you want to get through the whole game, but that’s not always simple. The cards are all fantastic to look at and fun to read, although there are a few you’ll be pushing out of your deck as soon as possible.

It’s when you come down to the game itself that things turn a little drier. There are three lines, a line for zombies, a line of barricades and a line for your cards. Zombies will try and break the barricades and when they manage to do so, will begin knocking down your health. Lose all your health and it’s game over. Each zombie has a special ability, strength or weakness, and you’ll find yourself battling many different types at once. This happens right from the get go, which can be a little overwhelming as you’re learning, and which means you’ll need to take part in quite involved battles straight away.

Things don’t really get any easier as you progress, although you’ll develop ways of dealing with certain situations. You’ll gain more action points – the device which limits you from performing too many moves per turn – and better cards, but the gameplay won’t change enough to make it feel exciting to you. If you’re bored by the first level, things will only get worse.

This lack of variety – in the things you fight, in the board you fight upon – is perhaps the biggest killer in Shelter. Moving on sometimes feels like a chore, and the length of each fight rarely feels equal to the reward you’ll get for taking part. The variety is in the cards themselves, in the things you can do and in the things you’ll need to do to beat each level. It all boils down to how much armour a zombie has, how many shots your gun has or if you want to fight or lay traps. They’re choices that feel fresh once.

This isn’t helped by a rather slow battle system, in which graphic novel style artwork constantly pops up to signify a change of turn or a fight. Again, the art work is very well done, but not so much so that you’ll be happy to see it countless times. In some cases, you’ll see certain pictures dozens of times in a single battle.

The level of customization in the the things you can take into battle is a nice addition to the game and is well handled, but at the end of the day, it’ll all come down to the same thing.

If you love the art work, enjoy card games and are happy to ignore occasional bugs or repetitive gameplay, Shelter is well worth a purchase. For an avid card game fan, I can’t think of a game more fitting, not involving virtual cards anyway. On the other hand, those of you used to Magic and its ilk may find Shelter a little too simple.

There’s a lot of reasons to pick up this game. Buy it for the art work, for the level of detail in the world that’s surprisingly well built, considering the genre of the game. If you love trading cards, buy it for the genre. For its price, for the level of effort that must have gone into it, it’s worth it; just don’t be surprised if your enjoyment begins to wane a little too quickly.