NarcoGuerra is the latest in a series of ‘Game the News’ games. The idea is to take a real world issue, in this case the ongoing battle between Mexican police forces and drug cartels, and make it a little easier to understand how complicated the situation truly is. But is NarcoGuerra a good game, or just a fancy news piece?

If you’ve played the classic board game RISK, NarcoGuerra will look immediately familiar. Instead of the whole world, you are focused solely on Mexico, which is broken into several different zones. At the beginning of the game, cartels control the vast majority of the country, and you are given a budget of several hundred thousand dollars to proceed.

Currency is one of the biggest ways NarcoGuerra differs from traditional RISK. You get money for controlling zones and you’ll capture resources from the cartels every time you take over a zone, but everything costs money. You get no free units, you’ll have to buy them for $175 thousand dollars each. If you choose to attack a zone, you can do it for free once per turn, but attacking additional zones costs money to pay your officers overtime. You’ll also have to spend cash to move units you already own to adjacent zones, and for intel. Intel reveals how many cartel units are in a given zone, a value that is hidden from you unless you have a police-controlled one adjacent to it.

Finally, currency allows you to launch Internal Affairs investigations, which is crucially important. Each turn, depending on a number of factors including the price of drugs, your corruption rating rises. If it gets high enough, you will lose troops to symbolize officers taking bribes from cartels or even joining them. Managing the effective police presence on the streets and the corruption within the force is a challenge, particularly when funds are scarce. 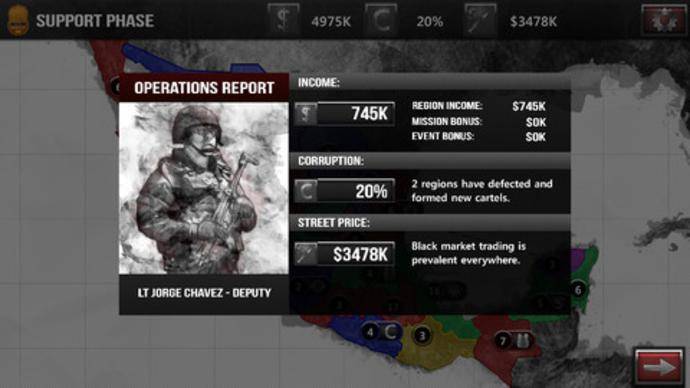 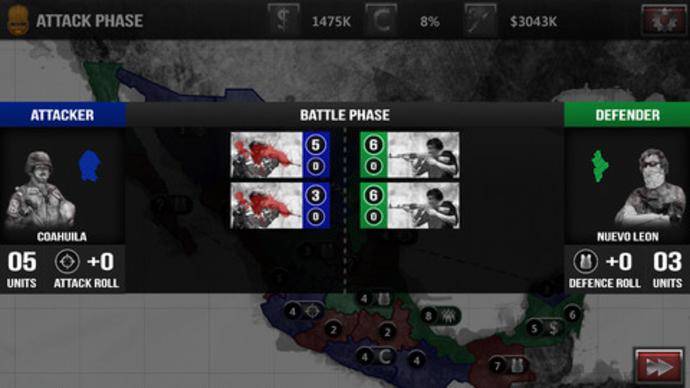 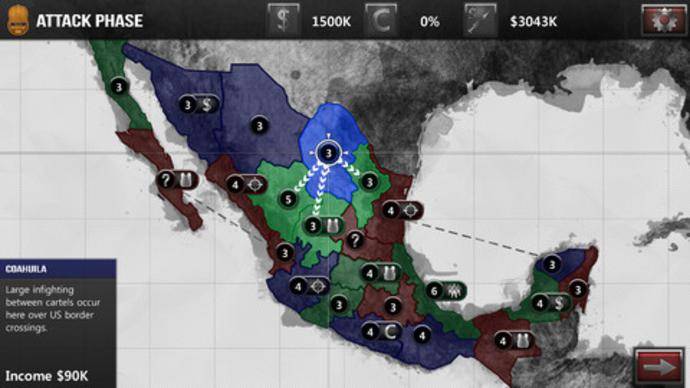 Adding to the pressure is the fact that you can have cash added or subtracted at seemingly any time. At the beginning of one turn you may be told that you found extra resources left behind by cartel members, and the beginning of the next you are told that a new political party is in office and they are advocating a less militant stance against the drug trade, imposing a huge cash penalty. It can be infuriating, but that’s really the point; understanding all of the moving pieces in controlling the Mexican drug trade gives a glimpse into what some of the real reformers have to try dealing with. Often people think there should be a cut-and-dried solution to these problems, but in real life there are so many unpredictable factors that the path to victory may not be clear. NarcoGuerra does a fantastic job of illustrating this point.

NarcoGuerra isn’t much to look at, but the graphics adequately portray the ideas being presented. The game is largely just a map interface with zones of different colors denoting who currently controls them. There are the occasional pictures of police or cartel members, but the game would be largely the same without them. I never felt that NarcoGuerra needed more than it had, but if the simple map view with unit numbers bothers you, you’ll want to look elsewhere.

Like many iOS games, the audio in NarcoGuerra doesn’t play a huge role. The little sounds of acknowledgement when you tap things and some appropriate music make up the bulk of the aural experience in the game. You’ll hear a bit of gunfire as well during battles, which is a nice touch that I preferred to the sound of rolling dice that many similar games feature.

NarcoGuerra largely succeeds as a game and a news piece. I was appropriately excited or frustrated with the random turns of events, and I genuinely felt that I had earned my victory when the time came, a feeling frequently missing when playing against AI on other world domination  games. I also come away with a stronger knowledge about a few of the complicated issues facing Mexican police forces. A game may not quite be able to cover all of the intricacies of something so complicated, but I have a better grasp now than I ever have from simply hearing blowhard news reporters talking about Mexican drug cartels.

NarcoGuerra is worth your time, despite that fact that the replay value largely disappears once you’ve beaten the AI a few times. Skirmish mode is available however, if you really enjoy the game.

I had a great time AND learned something playing NarcoGuerra. How often do you get to say that?