Not long after the release of Kingdom Rush on iOS in 2011, Ironhide Studios announced a sequel for the game – and save for a few screenshots released during the holiday season, they kept a pretty tight lid on development of their next tower defense title, which finally hit the App Store last week. I don’t know if I’d call it a true ‘sequel’ – but as a version 1.5 of sorts, Frontiers brings the same fantastic gameplay as the original, with enough tweaks and additions to keep the experience fresh.

As a tower defense title, Kingdom Rush is pretty simple: place the towers, fight the bad guys, upgrade, repeat. Where the series really separates itself from others is the balance of personality and challenge: after the first couple introductory missions, players are thrown right into the fray, taking on massive waves of multiple enemies through 27 missions (two of them hidden), deploying reinforcements and controlling the flow of death dealing on the field.

Of course, Frontiers takes a few steps to change things up without changing the core gameplay at all – which some might see as a pro or a con, depending on if you view the game as a true sequel or not. Both arguments are valid: there aren’t a lot of new things introduced, but what is adds a bit of dynamic strategy to the game. The biggest changes come in the upper echelon of upgrades to the game’s standard towers, powers that can add area-of-effect bonuses and new special attacks that add new considerations to progressing through stages (for example, one of the archer tower upgrades add a critical hit chance to other towers in the immediate area). 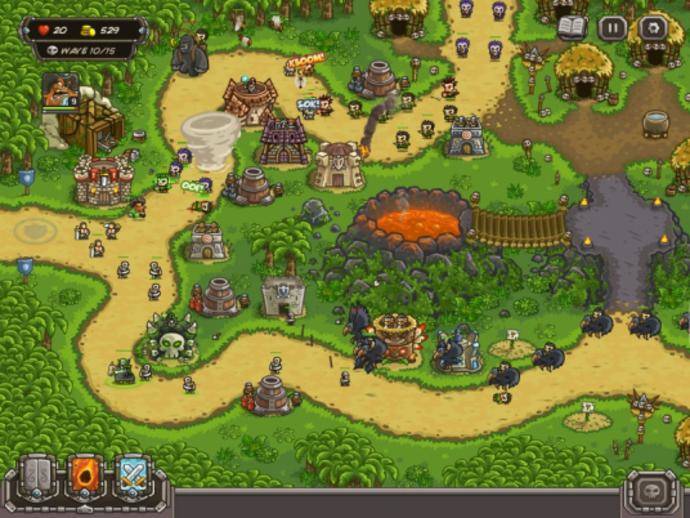 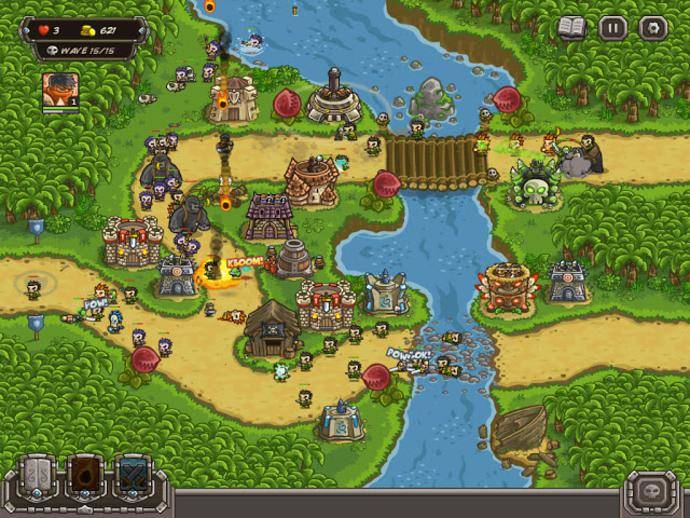 Arguably the biggest change is with the heroes, the powerful characters players take to the battlefield to unleash special, visual effects-heavy attacks on enemies. Not only are the heroes now upgradable (as they level up, they earn skill points to be spend on their five different attacks), but there are a lot more heroes to choose from: nine in total, though six of them are only unlockable through IAP (the most expensive costs $4.99, and is quite powerful). It would’ve been nice to see a discounted package to purchase all of them (especially with no option to try one out before buying), but for gamers who are planning to play through and earn all 75 stars, there’s plenty of incentive to pick up one of the other warriors.

While Frontiers plays almost exactly the same as its predecessor, there are some welcome visual changes to the familiar package. Animations are smoother, the game’s optimization allows it to handle more on-screen enemies, and every stage has little visual touches on its landscapes to add some flavor to the various landscapes (though players will be a little busy with on-screen mayhem to pay a lot of attention to these). The various towers have gotten an upgrade as well, and on the most difficult waves of each stage, all these little tweaks and touches combine for the most beautiful Kingdom Rush experience yet.

It also sounds great, too – no small feat in the world of tower defense, where ultra-repetitive sound effects are an inherent part of the game’s construction (fighting dozens of the same enemies over and over and such). What I’ve always loved about Kingdom Rush is how great it sounds: heroes and reinforcements always have something grandiose to say (“For honor and glory!”) and lots of great medieval battle sound effects layered on top to further exemplify just how wild things can be on screen at times. Although these effects and background tracks are largely the same as the original, it speaks to how effective the game’s audio is that it remains a highlight, even two years later.

“More of the same” isn’t always a bad thing – particularly with mobile games, where exponentially lower price points relax the pressure on developers to reinvent the wheel each time around. If you never played the original, Kingdom Rush Frontiers is a must-play title (especially on the spacious screen of the iPad) – and even if you have, there’s enough new material to make it a rewarding return to the battlefield, even if it’s not a true ‘sequel’.