Many’s the day I spent in my childhood trying to combine my two favorite things: Card games and Chess. I never quite succeeded. When I first fired up The Wild Kingdoms for review, I found that I was clearly not the only one who had ever dreamed of combining these two disparate genres. But is The Wild Kingdoms everything I dreamed of?

Upon starting The Wild Kingdoms, you’ll likely be struck by the minimalist aesthetic. Black and grey are the main colors used, but it only serves to make the other more-sparsely used colors (typically on power up cards) stand out. 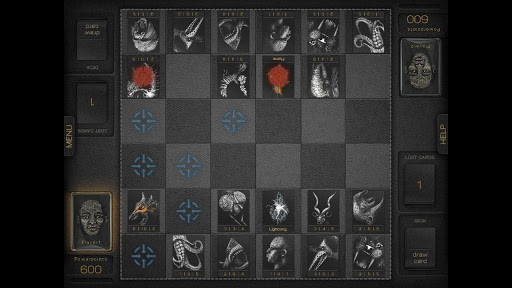 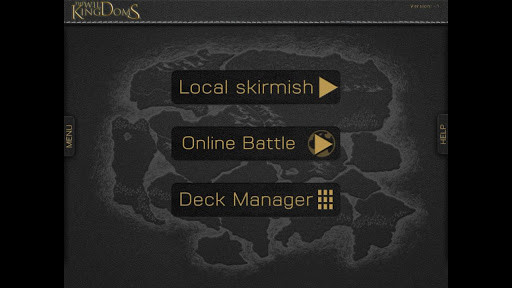 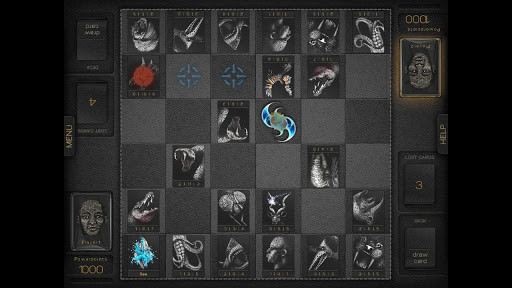 You’ll also notice that all of the cards that represent the various creatures under your control are not pencil sketches as they first appear, but are in fact made up of written words. I suspect it might be hard to make out some of the words on a cell phone screen, but on the iPad you are able to read them without much difficulty. However, this leads to one of my problems with the game. Namely, why are the cards made of words rather than simple pictures? Was it a mere stylistic choice? I got very excited upon seeing the word ‘Spacetime’ written on the face of one of the cards (the one used as the game icon, in fact) but the game doesn’t have any story or information along with it, so my curiosity goes unsatisfied. My initial excitement over the card design faded a bit once I found no reason for it to be presented in such a way.

Much like the graphics, there isn’t a lot to the audio in The Wild Kingdoms. However, that isn’t to say that what is there doesn’t add to the experience. The simple sound effects that represent your actions on screen are backed up by tribal drums and it serves to set the mood as well as one might expect. In a strategy card/board game, the audio likely won’t be he first thing on your mind as you play.

When the game begins, you are given a choice of using a 8-, 16-, or 24-card deck. Both players build a deck from a pool of identical cards, so the playing field is completely even from the beginning. After choosing your cards, you arrange them on the board, building your formation on the back two rows. Once both players have placed their cards, play begins. The game itself reminds me of a cross between Chess and Stratego, in that you can see what pieces the opponent is using and you have an idea of what their capabilities are, but each unit has different power values that it uses for attack and defense. Unlike either of those games, The Wild Kingdoms racks the HP of each unit, so a strong unit can be taken out by a coordinated attack or consecutive attacks by weaker units. Your goal is to kill a specific opposing unit, while protecting your own.

It’s the kind of game that you discover new strategies and more depth to as you play. The game is interesting enough that I would have liked to play it more on my own against the computer, but this isn’t currently an option. As of now, playing a local opponent or finding a Facebook friend who also has the game are your only options. I’ve asked the developer whether a single-player mode is potentially coming, and they have suggested that it may come in a future update if a community of people build up around the game and ask for the feature.

The Wild Kingdoms is a fun little card/board strategy game, but the inability to play against a computer opponent and the lack of a narrative framework for the interesting card designs holds it back from being an instant classic.