Every so often, I find myself browsing through the catalog of games available on the iOS App Store.  Most of the time I find nothing that particularly catches my eye, and I move on to other things.

Now for most people, it’s the “Tekken” part that catches the eye.  Not so in my case.  As you may be aware, I’m frequently suckered in by the addition of cards to any type of game.  Often recasting a popular franchise with a whole new set of mechanics turns it into a bewildering mess, but Tekken Card Tournament manages to scratch the “Fighting-game Wannabe” itch even while it provides an entertaining card experience.

You might be expecting a game board or tabletop where cards are played, but there’s really none of that in TCT.  Upon choosing your character (from a choice of eight Tekken favorites) you begin playing and it looks every bit like a classic Tekken experience.  Two fighters face each other on a 2D plane, health bars represented at the top.  Obviously you shouldn’t expect a level of graphics detail to rival home consoles but the game looks great on my iPad nonetheless.

There isn’t much to say about the audio in TCT.  The sounds and music are nothing amazing but they are the same sort of thing you are used to if you are a Tekken fan.  Strikes and blocks sound crisp, and the music sets the tone for battle just like in a Full Tekken Experience.

As for playing the actual game, TCT is essentially a more complicated version of Rock, Paper, Scissors.  You and your opponent choose from three options: Focus, Block, and Strike, and then your choices resolve at the same time.  Focus causes you to draw a card into your hand, up to a max of 5.  Cards represent various character attacks, and list the damage they do as well as any special effects like destroying a card in your opponent’s hand.  Choosing Strike causes you to attack with all the cards in your hand, played from left to right.  The Block command automatically blocks the first two cards in your opponent’s line-up. 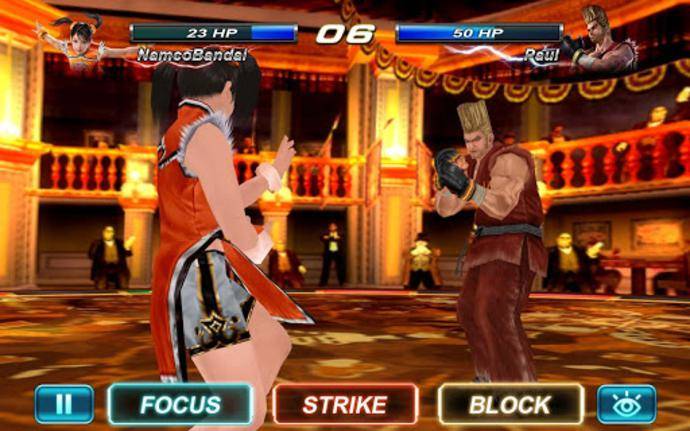 Since each player can see the cards that the other is holding, the fun and strategy comes from trying to read your opponent.  Should you strike early, after only drawing two or three cards and hope that they won’t think to block so soon?  Do you hold out for five cards in your hand, even though your opponent is likely to go on the defensive and negate your first two cards and then set up a retaliatory strike of their own?  It’s easy to see how a person could end up trying to think a few moves ahead, especially if you are playing against a friend and you can really get into their head.

Winning matches gives you XP and currency to be spent on new cards that you can use to flesh out your deck, giving you the upperhand against opponents who don’t feel like paying attention to the deck building aspect.

Playing a traditional fighter on a touch screen has the potential to be a frustrating experience and developers often have to find ways around those constraints.  TCT has a taste of the fighter experience while offering a deck building and card battle system that not only works well on a touch screen but is genuinely fun to play against others.  Download it free from the App Store and you too can have the pleasure of destroying me at something I enjoy!