Sand Slides has a very simple premise. Coloured sand will fall from the top of the screen, and you must make sure that that sand falls into the right coloured funnel. You do this by creating slides, using the touch screen to direct the grains as they drop. This starts off fairly easy – some of the sand drops right down into the right funnel – but it’s not long before you’re having to crisscross slides and collect sand in “buckets.” It’s both ingeniously simple and utterly frustrating.

The gameplay works exactly as well as it can. It’s obviously been made by someone who knows what they’re doing, and the input lag and physics problems that other, similar iOS games might suffer from are non-existent here. Sand drops as you’d expect it to, it collects as it should and if something goes wrong it is always your fault. With a little time and practice, you can smooth out your own performance and aim for some really great top scores. 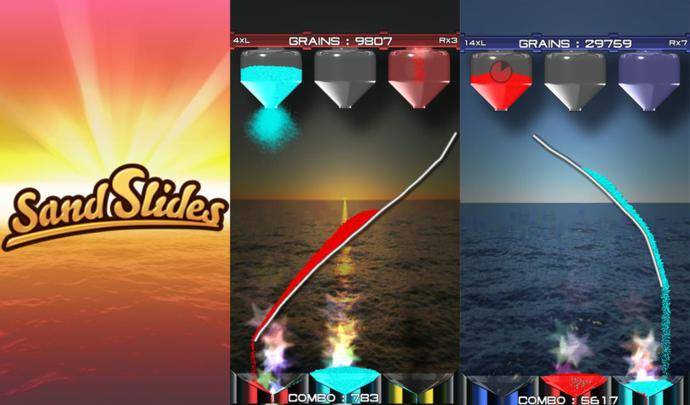 As a gameplay mechanic, it’s really difficult to knock Sand Slides. Instead, the main problem comes from two other sources: an over-keen attempt to sell things to you and a lack of depth.

This is the first paid app I’ve seen that asks you to pay extra for the removal of ads. While we received a review copy, there were still an occasional prompt to follow the developer to learn about future games. That’s going to be a big no from a lot of people, especially if that’s not the “ad” version of the game. There’s also the fact that the end of every game gives you the opportunity to gift the app to a friend.

When you’re not being asked to pay more for something, you’ll find there’s not an awful lot to do in Sand Slides. You can either play Marathon mode, trying to go for as long as you can, or Challenge mode, which counts down from a certain number. There are various difficulty modes, but for some reason the harder difficulties don’t actually work. The second stream of sand never releases, and you’re left watching a motionless screen or quitting to do something easier.

So although the gameplay itself is flawless, Sand Slides consists largely of missed opportunities.

The music has a real retro feel to it, which is good or bad depending on your preference. I turned it off after a short while, although I’d struggle to necessarily call it bad. The graphics are, of course, pretty limited, although I must say that I was impressed how many individual pieces of sand there are. Aside from that, the game is made up of a seascape background and a few menus. Suitable for their purpose, but nothing any worse or better than that.

Sand Slides suffers from being released too soon. While the basic gameplay is down and is enjoyable in and of itself, there’s no real longevity, no diversity. You have one game, scored in a slightly different way for each mode. The optimist in me wants this to be the story of someone who worked hard on a game and just couldn’t put any more time into the project, but the cynic in me sees the ads and thinks the worst. That’s only made worse by the fact that the ad is for a better version of THIS game, coming at a later date.

For what it is, Sand Slides isn’t terrible. If you go in knowing what you’re getting and still want to shell out the cash, you won’t be disappointed.