Injustice: Gods Among Us Review

Injustice: Gods Among Us

At first glance, Warner Bros.’s Injustice: Gods Among Us seems thoroughly unappealing: it is a watered-down version of its console counterpart, with simplified controls and repetitive gameplay design, topped off by the ever-damning price tag of ‘free’, never a promising sign for a licensed App Store game. Despite all this working against it, the mobile version of Injustice: Gods Among Us is actually quite a bit of fun to play, a simple but action-packed fighter perfectly designed for mobile screens.

The best way to describe Injustice is the Capcom vs. series meets Infinity Blade. Each fight pits three hero’s selected from a player’s ‘deck’ (a bit of a misleading turn, since players will never have dozens of cards at their disposal) against three AI-controlled opponents, battling until one team is completely defeated. Fighting is quite simple: either tap for a light attack, or swipe left/right for a heavier, slower attack, utilizing a two-finger hold for a block button. Like most fighting games, attacking and defending builds up an incremental special meter, which allows for devastatingly powerful attacks, activated through a varying combination of taps and swipes on the screen. 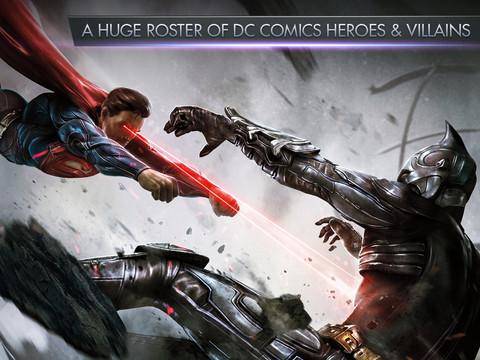 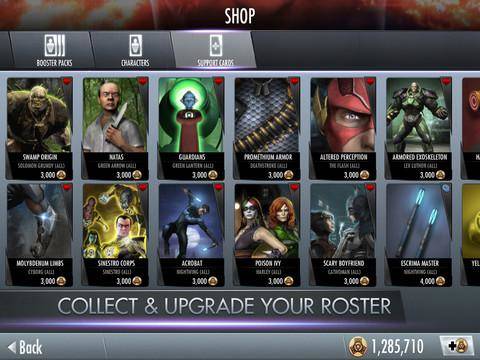 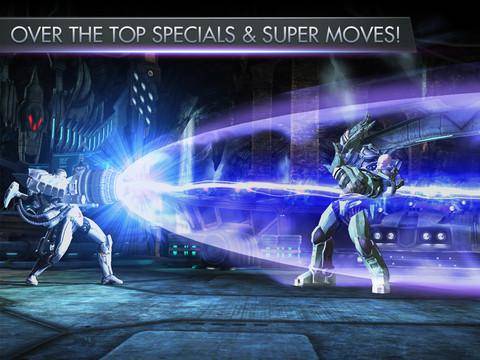 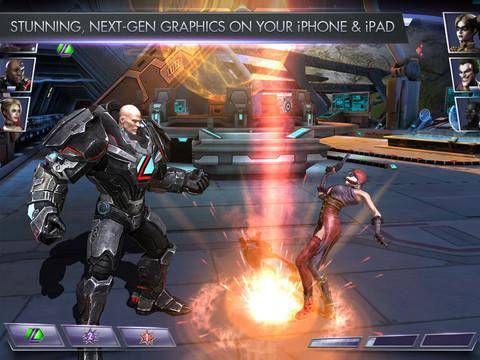 It clearly reveals the repetitive nature at its core, but the on-screen action is so well designed and animated, it becomes a lot more addicting than it should. Every special attack comes with its own grandiose animation, paying homage to certain hero’s well-known abilities, and looks fantastic on iPhone and iPad screens, thanks to the Unreal Engine. More importantly, it manages to be a fun ‘casual’ fighter (a very hard thing to accomplish): there’s a bit of rhythm to the fighting, learning how to anticipate oncoming attacks and blocking them to minimize damage. Like any good console fighter, there’s no better feeling than blocking a powerful move, and following with a devastating counter-attack – and Injustice captures that feeling well, especially with the ability to flip back and forth between your three combatants, adding a bit of strategy to the mix.

There are also slight RPG elements thrown in for good measure: every fight earns XP, which levels up characters and allows for upgrades to be bought using in-game currency earned from winning fights, adding new special attacks and increasing the damage of existing ones. Said currency can also be used to buy decks of new cards or individual character cards – there are about 20 different DC characters in the game, most of which who come with two or three variations, depending on card type (bronze, silver, gold), for a total roster of 36.

When buying decks and completing ‘battles’ (sets of increasingly difficult fights; there are 48 battles in total, and over 100 individual encounters to win), there are also support and upgrade cards to be found, which add power and health buffs to certain equipped characters, or unlocks the next upgrade level to a special ability for no cost.

So what makes Injustice a free-to-play game? There are two mechanics: the in-game currency is the most obvious, and the one most gamers would be wary about – but I can safely after playing 70+ battles that Injustice is not an in-app purchase fest some might dismiss it as. The ability to spend real money is there of course, but the amount of credits given for victories while playing (along with the huge boosts to power and health when a card upgrades) is more than generous, which makes grinding for cash and experience points completely optional throughout the experience.

The other free-to-play catch in the game are the purple energy bars on every card, which decrease with each encounter, depending on the ‘cost’ of the fight. Once it’s empty, players can either wait for it to fill up, or use energy cards earned in-game (or bought through the store) to fill up the bars again and continue fighting. In a way, the repetitive nature of the gameplay makes a perfect marriage to the energy meters: it’s a game that’s extremely fun for 30 minutes at a time, which is generally the amount of gameplay it takes to empty the meters. Playing it any longer would quickly wear down the experience: at it’s heart, it’s basically a button-masher, with a tiny bit of health and team management thrown in to keep things interesting.

When the console version releases on April 16th, there will be benefits to owning both the console and mobile iterations; playing the console version will unlock items and earn experience points, and vice versa. I’m not exactly sure what they mean by ‘items’, but the ability to level up cards while playing on the full-featured console version is a great incentive – and further makes the progression of the game and cost of new characters more than reasonable for fans of the game (save for a few of the highly-priced gold characters, which will take a little patience to acquire).

It can be quite difficult to recommend a free-to-play game; there’s such negative connotations attached to them, thanks to the thousands of poorly designed, highly derivative titles using in-game currency and ‘energy’ timers to force their way into a player’s wallet. Injustice: Gods Among Us manages to avoid this restrictive, money hungry feeling – and thanks to its fantastic visuals and light RPG elements, it’s definitely worth a download for any DC fan.