Badland might be crammed into the category of an “Autorunner”, the genre of gaming where characters zoom along the screen and players just need to hit a jump button at the right moment.  But the character in Badland doesn’t actually run; it’s a weird furball that flies, and players have to tap the screen of the iPhone to flap its wings and keep it afloat.  It’s an “Autoflapper” if you will, but that doesn’t even begin to describe this unusual and engrossing game from the two-man team of Frogmind Games.

Badland has an accurate title indeed.  These lands are a 2-dimensional world filled with an assemblage of obstacles that can crush, impale, explode and chop any poor critter that happens to be in the wrong place at the wrong time.  Alas, there is such a helpless little furball floating around in these bad lands, and it’s up to the Player to guide it through forty levels of this horrible death world.

Players don’t have much control over the little guy.  He floats along from left to right while a wall of death pursues.  Players can only tap the screen to make the hapless creature fly upwards over barriers.  Doing nothing will cause it to slowly glide to the bottom of the screen and go under other barriers.  If the creature touches the ceiling or floor it slows his progress and he will eventually be consumed by the pursuing death. 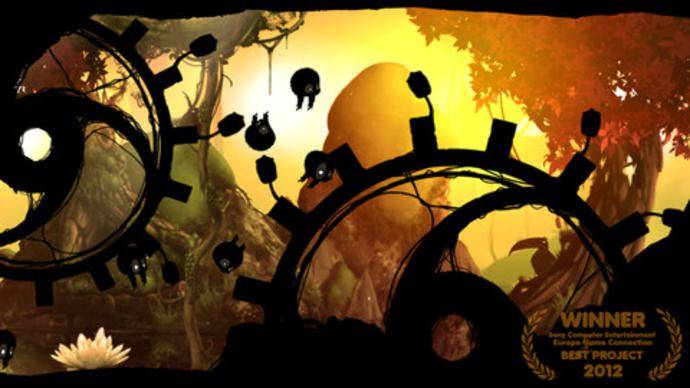 But that isn’t all there is to worry about.  No, the levels are crammed with physics puzzles that make players have to quickly figure out how to push buttons, or manipulate objects, all while on a strict timer!

To keep the gameplay fresh, there are tons of power-ups.  By floating close to various orbs, the little critter will grow or shrink in size.  These changes allow him to pass through tiny holes, or use his mass to move objects.  There are many other sorts of power-up like slowing down time, or becoming extra heavy, and there are power-ups that provide additional friends to follow along the level (And these extra creatures are required to make it past many kinds of puzzle).

There is also a multiplayer mode that lets up to four players race against each other on the same device, by each tapping one corner of the phone or tablet.  This is a unusual new way to do multiplay, and it can be a bit unwieldy with larger groups on a phone, but it is still a clever new way to make a party game out of a traditionally single-player experience.

The simple controls and goals in Badland combine with complicated variables to make a game that is at once accessible to casual iOS gamers, but also challenging enough for hardcore players.  Badland is available now for iOS.