Towards the end of World War 2, with all of the great powers of the world arrayed against them and closing in from all sides, the Nazi war machine had one last chance to turn the tide: the V2 rocket program. As the program nears completion, scientists working on the rockets begin making deals with Americans and Russian forces to escape from the sinking ship that is Nazi Germany. One American sniper is deployed behind  enemy lines in order to find these scientists, eliminate any that are considering joining the Russians, and make sure the V2 rocket program never makes it off the ground.

It probably goes without saying that Sniper Elite V2 is a game largely focused on the sniping experience. The ‘sniper genre’ (if it can be called such) is a niche market, catering to those gamers who enjoy the idea of sneaking around behind enemy lines, taking out high value targets at extreme ranges and then disappearing like a ghost. Sniper Elite V2 is by turns a superb sniping experience, an uneven stealth game, and a low-rent cover shooter.

A typical mission sees you sneaking between excellent vantage points from which to deal death with the end goal of eliminating a target, often in some creative way. You’ll feel like the Angel of Death as you throw hot lead from the top of a ruined church or bombed out building. And nailing that perfect shot only to be rewarded with a slow motion x-ray view of the damage done to your target is something I looked forward to every time I pulled the trigger. Watching skulls explode, teeth and ribs shattered, hearts and lungs punctured, and (occasionally) testicles disintegrated might give gamers with weak stomachs pause, but I suspect that most people looking for a good sniper game will appreciate the attention to detail. 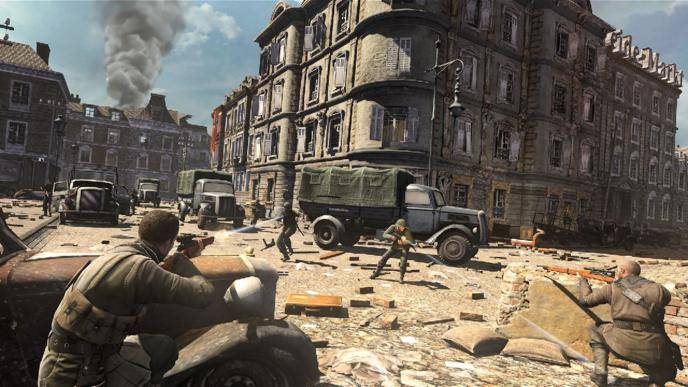 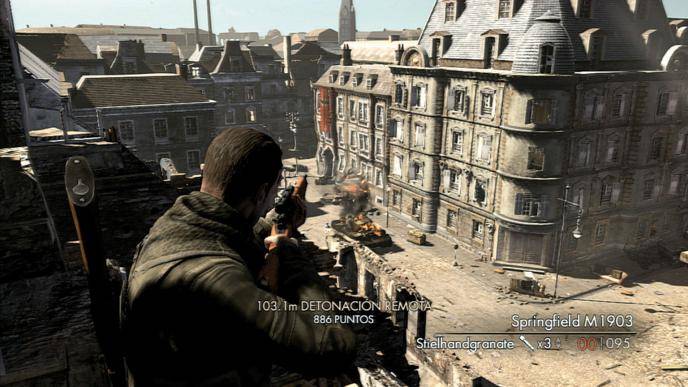 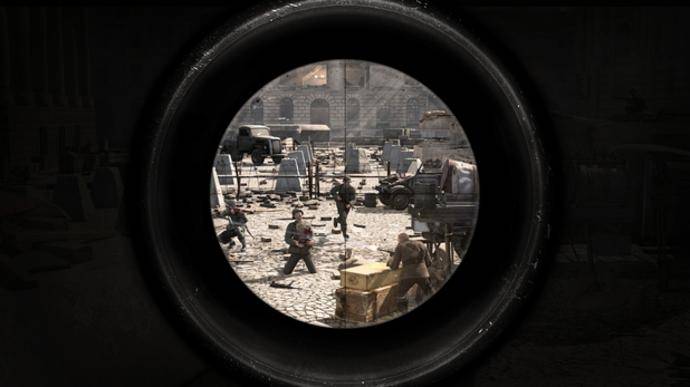 Besides modeling bones and organs to be destroyed, the game has the best sniping gameplay I’ve experienced. You can fully customize the level of simulation, letting you decide if you want to deal with bullet drop, wind, heart rate, and more. Or maybe you just want to ignore the simulation aspects and have your bullets travel in a straight path over any distance so you have an easier time with the long shots. This level of customization allows players to find the sweet spot for their style of play.

Unfortunately, when you aren’t sniping, the game is not nearly as polished. Stealth segments can be either incredibly frustrating or way too easy, depending on whether the enemies spot you from miles away or somehow manage to miss you even as you creep by mere feet away. When it comes to a firefight, your sniper is woefully unprepared. I understand that the developer wanted to emphasize the sneaking aspect, but when the cover system doesn’t always work the way you expect it to and the controls for shooting standard weapons feels loose and imprecise, you’re often left getting killed by enemies who should have been only too easy to get the drop on and dispatch. The occasional strangely spaced checkpoints will make dying a potentially frustrating experience, so staying as stealthy as possible is a must as all times.

Using the binoculars to mark enemy locations is a neat feature that makes the sneaking around a bit easier, but you can expect to be spotted and get in a gunfight that you thought you could avoid at least a few different times before the end of the game.

Sniper Elite: V2 offers a number of war torn locations in which to do battle, and all of them look fairly standard. Like any World War 2 game, you’ll see a lot of bombed out buildings and streets full of rubble. The textures on the characters and scenery may not be anything special, but the specificity with which Rebellion has modeled the insides of your enemies for the x-ray kills continues to impress after having seen many different x-ray shots.

In keeping with the stealth aspect, there isn’t a ton of music on display in Sniper Elite: V2. However, enemies can and will hear you behaving recklessly, and I felt that the sound effects were quite good at representing what was occurring on screen. Any and all rifle sounds in particular, from firing to working the bolt are fantastic, as one would expect from a dedicated sniper game. Voice overs are infrequent, but do a good job of setting up the missions and are better acted than I would have expected. The moments where the audio stood out in my mind were times where loud noises masked the sound of your shots, allowing a patient player to make long range shots without losing the element of surprise.

Sniper Elite: V2 is not a great game on every front, but the small moments of frustration pay off in spectacular ways when you get to an excellent vantage point and rain death on your enemies. The sniper simulation is very well done, and you’ll always feel completely in control of where your bullets are going even as they are pulled toward the earth and pushed here and there by the wind. The times that enemies catch you out when they shouldn’t have been able to won’t ruin the feeling that you are in control of your own destiny, trapped behind enemy lines with a mission to save the free world. If you can put up with a few small annoyances.