Injustice: Gods Among Us Review

Injustice: Gods Among Us

NetherRealm Studios certainly announced their arrival in 2011 when they revitalized the Mortal Kombat series, simultaneously bringing the game back to its roots and expanding on the traits that made the original trilogy so great. Since then, they’ve been fairly quiet, releasing the Mortal Kombat Collection on  consoles, and developing Arkham City: Lockdown for mobile devices the same year. Two years later, they’ve returned to both consoles and handhelds, with Injustice: Gods Among Us a digital brawler focused on iconic DC superheroes and villains.

Like MK, fights in Injustice take place on a 2D plane, with dynamic, interactive 3D backgrounds that will frequently come into play. There are also no breaks between rounds: each fighter has two life bars, giving a small pause whenever one life bar runs out as a way to signify the end of a ’round’. It gives a great flow to every match, without lengthy victory animations or a reset to the middle of the stage. If you’re defeated in the corner, you’ll stay in the corner until you work your way out, keeping every player on their toes for the entirety of a match. 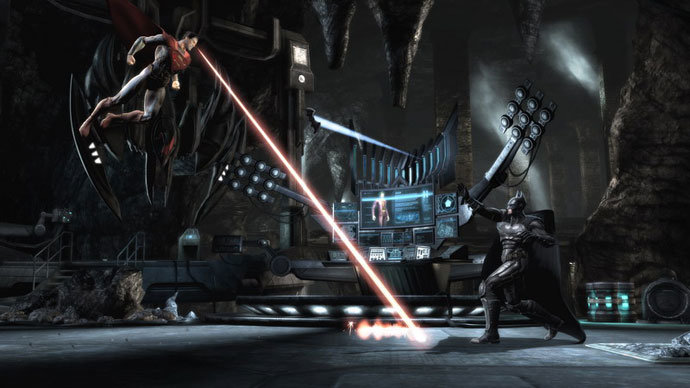 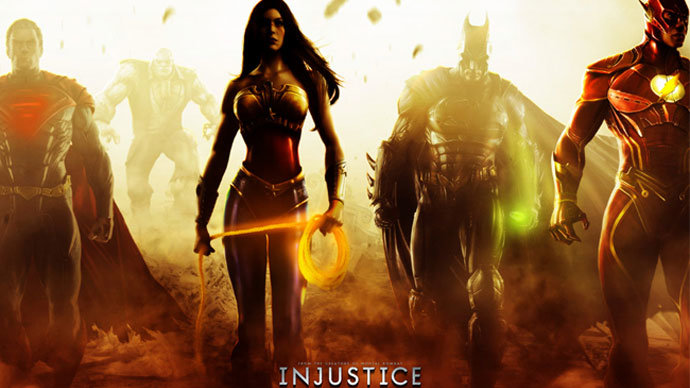 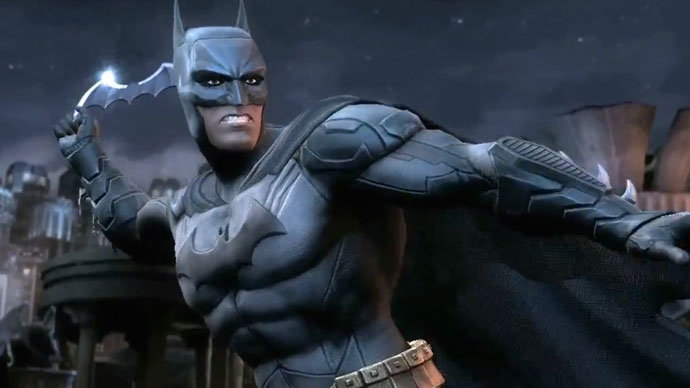 There are 24 characters to choose from, all available from the beginning (with four more being promised through the season pass offered in the Marketplace). Each character comes with multiple costumes (most from Insurgency story lines or The New 52 designs), and their own light, medium, and heavy attacks, with wildly entertaining (if not a little lengthy) animations for ‘Super’ moves, more akin to specials in the Marvel vs. Capcom series than what we’d expect to see here. These outlandish moments add a lot of flavor to each match, whether it’s the Joker tossing a pie and beating someone with a crowbar, or it’s Lex Luthor harnessing the power of a laser suspended in place to inflict massive damage on an opponent.

There are two big departures from the MK juggle-and-combo style of gameplay, both of which go a long way to creating a unique fighting experience. The first of these is the lack of a block button, replaced by a more traditional Street Fighter-esque ‘back to block’ defensive style. Secondly, once a match players can initiate a clash, where players secretly gamble portions of their special bar, restoring health to the winner (or dealing damage, depending on who initiates the clash). The clash is infinitely useful, allowing a match to swing in a matter of seconds, when an opponent regains 20 -30% of his health, and you’re left clinging onto a tiny bit of life remaining.

In terms of stage design, Injustice features some of the most beautiful dynamic backgrounds we’ve seen in fighting games. Many of them depict famous locations (Aquaman’s palace, Batman’s cave), and others take place in the war-torn Metropolis where the game’s story takes place. Each stage has multiple objects to interact with or careen players off to begin combos, really creating an interactive feel with the world around you, instead of feeling like a lifeless, static background. Also, by executing an attack near a corner, players can send opponents flying through level transitions, racking up huge amounts of damage as they smash into objects and bounce off things until landing in the next stage to continue fighting.

In terms of game modes, Injustice’s offerings parallel Mortal Kombat’s, with a few changes and enhancements. The challenge tower returns in the form of S.T.A.R. Labs, offering players hundreds of different unique scenarios to battle through and three-star in. Of course, there is a traditional arcade mode, with a huge number of unlockable modifiers to change up gameplay; for example, there are options to create pseudo-survival scenarios, or other restrictions that force players to think strategically to master.

For a fighting game, Injustice also has a welcome number of online options to keep matches feeling fresh. Returning from MK is the King-of-the-Hill style battle mode, where up to 8 fighters battle it out for supremacy in survival-style tournament of sorts. The traditional 1 v 1 options exist, of course, and in testing, worked quite well, with no noticeable lag or lengthy wait times to get into a match.

The meat of the game, however, comes in the Story mode (again, something MK fans will recognize right away), which starts off very promising, and quickly devolves into hammy comic book dialogue between fights, and such a convoluted sense of place that it almost becomes pointless to try and follow who’s who. The game doesn’t try to confuse things too much, mostly choosing characters through its 12 chapters that lie on one side of the Insurgency/Regime alliances to keep a decent flow to the story, which bounces back and forth between dimensions constantly. This is a little confusing, even after the end-game becomes clear about halfway through the game. It’s got some solid voice work (including Stephen Amell from the CW series Arrow, reprising his role as Green Arrow), but none of the emotional beats have the impact one might expect (including a subplot with Lex Luthor that kind of falls flat on its face, and resolves too quickly).

That being said, the story mode is fun to play through – if not for the story, and for the variety of characters and opponents one will face through the narrative. Cutscenes are elegantly designed (and expertly composed), giving life and perspective to each fighting situation – which raises the stakes to a different emotional level than the typical Arcade ladder style of gameplay, despite some flaws in the execution.

Story mode might be a little short – it’s about five hours, and there doesn’t appear to be any ‘New Game+’ content (which I was hoping for, only having played as half the characters through the campaign). But between the online component and the S.T.A.R. Labs mode, there’s plenty of incentive to work through and unlock the massive amount of songs, concept art, costumes and bonus missions awaiting in the Archives.

Simply put, Injustice is a beautiful, beautiful game. The 3D character models are fantastically rendered, and as expected in a fighting game, smoothly animated (hardcore fighting fans can even access frame statistics for every maneuver, right from the pause screen) and full of little character touches in their construction and movement that will please fans of the various characters and their iconic traits.

However, the stages are easily the most impressive. The amount of dynamic objects and interactive pieces on each stage is terrific (for comparison, the new modifications to Unreal Engine 3 allow for three times as many on-screen background objects as Mortal Kombat did two years ago). There’s so much personality in those stages, thanks to the little character touches (like blowing up an opponent by launching rockets from a Batmobile off in the distance) that distinguish the lavish designs of every stage from each other in an important way.

The voice cast is also surprisingly solid – even without Mark Hamill as The Joker, although this is a bit noticeable during his dialogue. Every character’s got a number of cheesy comic book one-liners to throw out, and none of the voices stick out as false, or completely off-tone with what we’d traditionally expect to hear (even Harley Quinn, who can be a tough character to voice without making her extremely annoying). Again, the writing itself isn’t spectacular, but the performances are solid enough to rest on the laurels of the strong voice work by the cast.

NetherRealm didn’t sit on the success of Mortal Kombat with Injustice – it shows in the attention to detail with its source material, and the ambitious efforts to distinguish this title from others (like removing the block button, or adding in things like ‘character traits’ which provide short-lived boosts to damage and health or allow characters like Wonder Woman and Nightwing to change weapons). It remains to be seen if Injustice will be adopted by the hardcore fighting fans and competitors, but they’ve certainly created an interesting, kinetic fighting experience with Injustice: Gods Among Us.