Sniper: Ghost Warrior hit the gaming scene in 2010. It wasn’t very well received, but it sold well enough to warrant a sequel. The first installment was panned for containing too many run-and-gun missions, something that shouldn’t be in a game supposedly all about sniping. With that, developer City Interactive decided to make some much-needed improvements with the sequel, Sniper: Ghost Warrior 2. While they succeeded in building a game that focuses more on stealth and sniping, the final product leaves much to be desired.

Ghost Warrior 2 follows Captain Cole Anderson as he tries to track down a bio agent that’s being passed around between terrorists groups. Most of the story is in present day, but the entire second act is a flashback to Anderson’s time in Sarajevo. The little context given does supply some motivation, but the characters are all presented like we’re already supposed to know intimate details about them. Virtually every emotionally-charged moment is forced, and all of the plot twists are telegraphed. Essentially, the story merely serves as a backdrop to what this game is really all about – headshots. 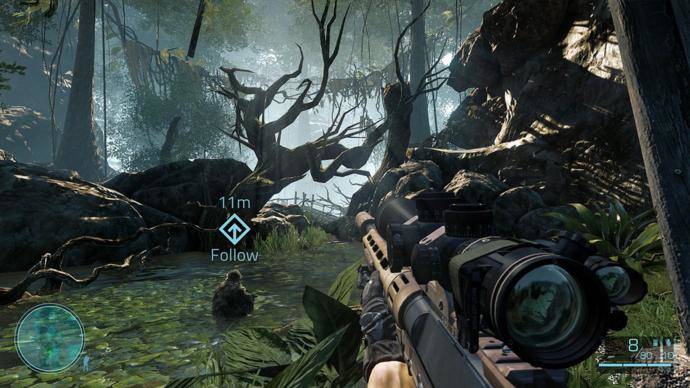 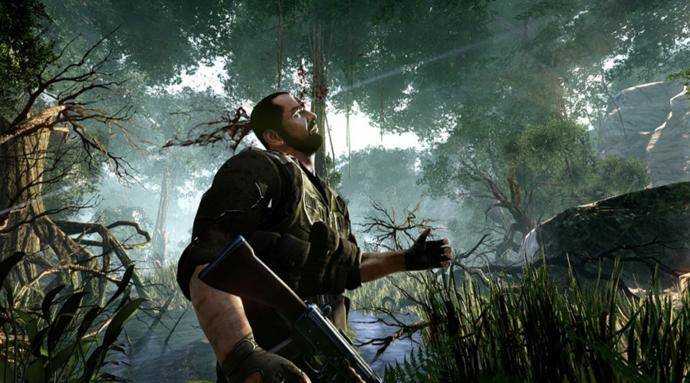 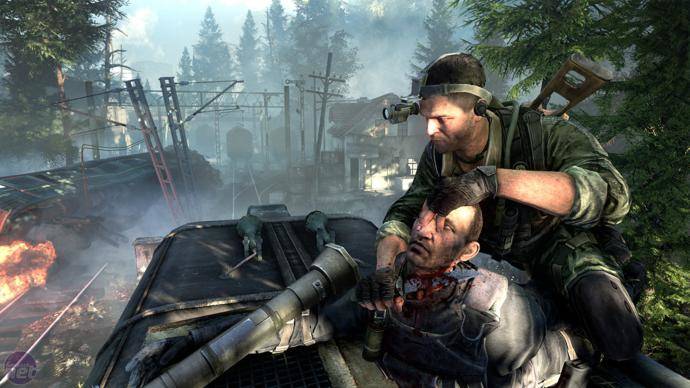 For a game that wants to capture the “complete sniper experience”, Ghost Warrior 2 is only mildly successful. Anderson’s heart rate, breathing and position are all factors when lining up shots, but the result is more Call of Duty than ARMA. I never really sensed any “realism” in the game, and most of the time I felt like I was in a carnival shooting gallery with a Spotter pointing out which duck or clown to shoot first. Sure, the game is more difficult on “Expert”, but the linear level design and enemy AI are too predictable to make things truly challenging. There were moments I had a few hang-ups, but I never felt like I was in any real danger. My Spotter certainly didn’t; the enemies ignored him, even at point-blank range.

As I played the game, I couldn’t help but think that City Interactive revisited the infamous “All Ghillied Up” mission from Call of Duty 4 and decided to create a game based around the concept. While this might have seemed like a good idea on paper, the result is ten stages that, more or less, play out the same way. The basic stage setup goes something like this: follow Spotter; get in position; clear area; move forward. Sometimes there are “forced stealth” missions (redundant, I know) where the stage begins with Anderson sans sniper rifle. However, the rifle is typically recovered early on and the stage is completed normally.

There is plenty of stealth in the game, and most stages require Anderson to either avoid enemies or pick them off selectively in order to push forward. The best stealth games allow for experimentation, but Ghost Warrior 2 moves along as if it’s on-rails and only begrudgingly gives the player a sense of control. The scripted events don’t help anything, either.

There are a few ways one could describe the visuals and audio. “Generic” is a pretty good word. “Dated” works, as well. Then again, “glitchy” is just as fitting. Tense music ramping-up when nothing is going on? Check. Terrible voice acting? Check. Characters walking three inches off the ground? Check. The set pieces feel like they’re begging to be interesting, but most are devoid of detail. The trees and shrubbery are dense and decent enough to gaze upon, but most everything else is a bit rough around the edges. The characters, meanwhile, all look the same, are poorly rendered and just as dull as their personalities.

I suppose I should go easy on the game since it’s a budget title, but this really isn’t an excuse as I’ve seen cheaper games that are more polished. Also, I never thought I’d see the day when a game’s cutscenes look worse than its in-game graphics. Alright, I’ll give Ghost Warrior 2 some credit – the lighting is pretty good, for whatever that’s worth.

Sniper: Ghost Warrior 2 is a game that might have been based on an interesting concept, but in the end does nothing for the genre. The act of sniping should be tense and give a sense of vulnerability. The idea of one person versus an entire army should be something that not only requires skill, but can also make for a though-provoking experience. Ghost Warrior 2 is unsuccessful in all of these areas, and everything about the game is just as cheap as its price tag.