Was MLB 2K13 doomed from the start? Up until a few months ago, there was no word from 2K or MLB on a license renewal – and once it finally was announced in late January, it seemed too late for 2K to implement anything new or innovative. But even with lowered expectations, MLB 2K13 is a travesty of sports gaming, a blatant reproduction of 2K12 in every single facet. This isn’t completely a terrible thing: what worked well in 2K12 worked here, but with less modes and absolutely no sense of effort on the part of developer to clean up any of its problems, it’s an entirely disappointing release, especially considering its $59.99 price tag.

The biggest change to MLB 2K13’s gameplay? The lowly Houston Astros are now in the American League. In other words, there’s nothing different about 2K13 from its predecessor on or off the field. Its strengths are still its strengths: the analog pitching system – which requires players to move the right analog stick in specific motions to perform different pitches – still remains the best in the genre. There isn’t another baseball game I’ve played that is able to recapture the feel and rhythm of pitching: pulling off an accurate complicated pitch for a third strike is one of the most satisfying experiences you’ll have in a sports game. 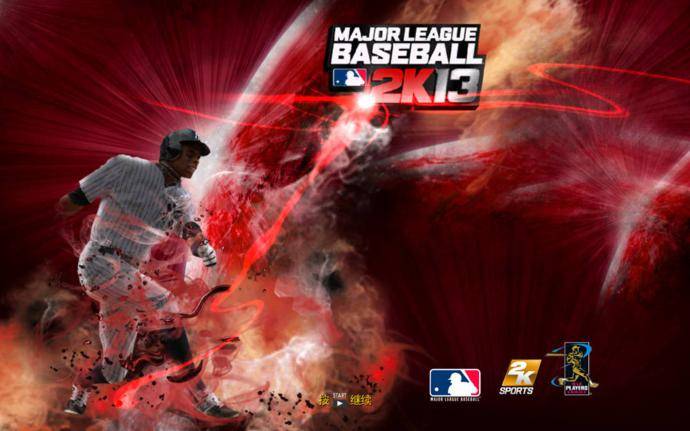 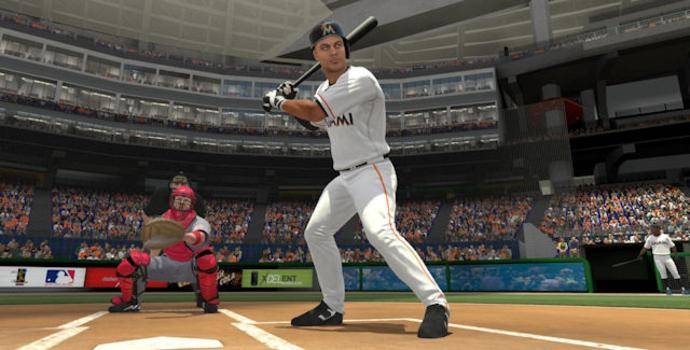 But baseball isn’t just a game about pitching: the hitting system from previous years sits untouched in 2K13, and though it’s perfectly functional, it has enough frustrating little bugs to wear down players over time. The biggest of these are the constant drops in frame rate when a player makes contact with the ball: often times, there will be a big stutter as the camera prepares to switch perspectives, and it removes any sense of fluidity from the moment, and leads to awkward replays later on, including times where a player’s swinging motion became three separate and painfully choppy animations, on what was supposed to be a game-winning home run highlight.

Most of the modes from 2K12 return, although its removed the online leagues and last year’s much touted ‘MLB Today’ system, which stopped working weeks into the season. Franchise mode and My Player remain intact, and that’s where the bulk of players are going to spend their time. These modes are not without their frustrations: the trade logic in Franchise mode is still a joke, and after two seasons, a non-pitching My Player will become a dominating force who bats .400 and whacks 60+ home runs with ease, removing any sense of accomplishment or challenge from the game by the time a player enters his prime.

A lot of this imbalance is due to the still-idiotic manager AI, that consistently leaves pitchers in far beyond their presumed (and stated on-screen) pitch limits or when they’re clearly getting hammered, which is nearly game-breaking for any player patient enough to take an extra pitch or two an at-bat, biding time until the pitcher wears down or inexplicably starts drilling batters in the back (which will happen).

It’s unfortunate, because even a bit of minor tweaking to the core AI would’ve made 2K13 feel like a fresher, more well-rounded experience on the field. Instead, it feels rehashed in every sense, re-purposed for a new season; the only “new” features were the text boxes added to the statistical spreadsheets to account for 2012 statistics. Worst of all, it removes modes that worked in the past: the absence of online leagues will certainly be a deal-breaker for any groups of friends that enjoyed that mode last year.

In other words, not only did 2K not bother to fix how the online games played (everything online plays at a completely different speed, right down to reaction times on swings and pitch speeds), but they actually take a big step backward by removing one of its most well-received and utilized features. But in this title, it’s par for the course: it’s 2K12 minus some of that game’s features, sacrificed because… well, that might take a little more work than changing numbers in text boxes.

Remember 2K12’s graphics? The beautifully detailed ballparks, weird color contrasts (especially with white uniforms), and confusing, sped-up animations? Good, because it all remains intact – for better or worse – in 2K13. There are a few new jerseys thrown in – the Houston Astros jerseys shown in the pre-release trailer being the obvious highlight – but outside of that, things look and feel exactly the same, right down to the menus and the home screen, which haven’t changed at all.

There are times when this isn’t a bad thing: camera angles on replays still look terrific when the animations and contact points are working cohesively, especially on home runs and double play outs. But this isn’t a consistent feature: often, a highlight that glitches when it first plays will glitch in replays, sometimes cutting the replay in half or showing it from a pointless angle, zoomed in on a player’s chest, where the laughably generic facial models can be seen in their full, dubious glory.

Even better is the audio package: any thoughts of MLB 2K13 being a fresh, new title are stomped out when the opening chants of “MVP! MVP!” included in last year’s intro start playing. Last year, it was fine, because Justin Verlander was the AL MVP that year. David Price (this year’s cover athlete) was not the MVP of the American League in 2012, though he did win the AL Cy Young (somehow “Cy Young! Cy Young!” doesn’t have the same ring to it). There’s a new soundtrack (touted as one of the game’s ‘new features’, which is a hilarious notion), which is the same forgettable mix of songs players will mute after the first month – and is only 12 tracks long, so it will wear down quickly, particularly if putting extensive time into Career mode.

At least the commentary is still top notch: even though it’s the exactly the same material as last year, the easy back and forth between Steve Phillips, Gary Thorne, and John Kruk is just as great as listening to a game on the radio. Their interactions aren’t forced and full of self-indulgent jokes (ahem, NBA 2K13), and they integrate statistical analysis into their narratives effortlessly. It would be nice to have some new material – but the one benefit to 2K13 being a copy of 2K12 is they didn’t break the few things that worked. I guess we can be thankful for that?

Whether or not 2K grabbed the license last-minute is a moot point: releasing a title for $60 demands some kind of effort on the part of the developer (and the publisher: their names are on the front of the box) before a gamer will invest. With MLB 2K13, 2K is basically asking to be rewarding for doing nothing – and they go a step farther in showing a clear lack of support for their baseball gamer base, insulting them with an over-priced, rehashed and stripped-down game that was only slightly better than mediocre to begin with – acceptable for most Xbox gamers who had no other option for their baseball fix.

If 2K13 was just a $10 DLC add-on for 2K12 to update rosters and stats, I’d have no problem with it. But as a full-priced retail title being touted as a “new” game, it’s an absolutely travesty, a slap in the face to any consumer that’s supported 2K’s middling MLB series as an acceptable alternative (as I have) for years, simply because there was no other option. MLB 2K13 is an embarrassment for the publisher and developer, a polygonal middle finger to loyal gamers and baseball fans.