7Based on
1 rating
Login / Register to rate.

Wrestling games have a rather long and odd history, especially when it comes to their core audience. The core audience for wrestling games isn’t always fans of wrestling, oddly enough, but just fans of wrestling games mixed in with wrestling fans themselves. I know that reads like a rather odd distinction, but it is very true. THQ’s rather sordid history with the WWE license extends back quite a while and has its ups and downs before they reached the end of the line with WWE ‘13, leaving the question of did they do the best that they could with developer Yukes to provide a quality game?

It is fascinating to follow the lineage of the THQ and Yukes WWE games from WWF SmackDown! all the way to today’s WWE ‘13, as the original SmackDown game was very much an arcade title, in stark contrast to the N64 titles that THQ published with AKI, which were simulation games. Still to this day do wrestling game fans look back to the N64 as one of the golden eras of wrestling gaming, with THQ’s own WCW/nWo Revenge, WWF Wrestlemania 2000 and WWF No Mercy being the gold standard, over thirteen years after No Mercy was released.

The SmackDown games were a giant departure and what they thought American audiences wanted over the simulation-style of games that were released for the N64; fast-paced, arcade action where the fun never stopped. Since 2000 they’ve spent most of their time with the SmackDown (later Smackdown vs. Raw and now WWE) series trying to stay true to the original premise while integrating those “simulation” elements that fans demanded every year. WWE ‘13 is the culmination of thirteen years of work on that engine to make it into something much much more. This was their last shot, now let’s look at how they did. 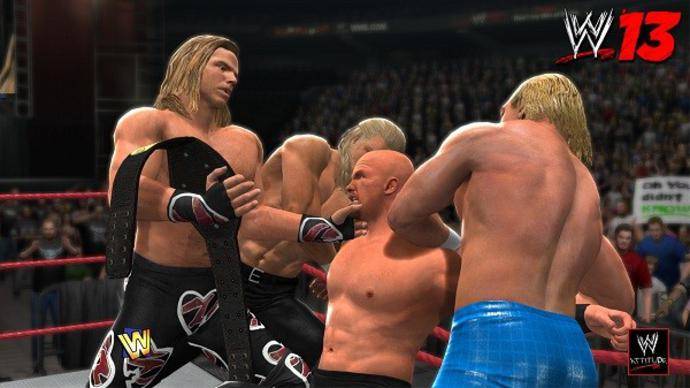 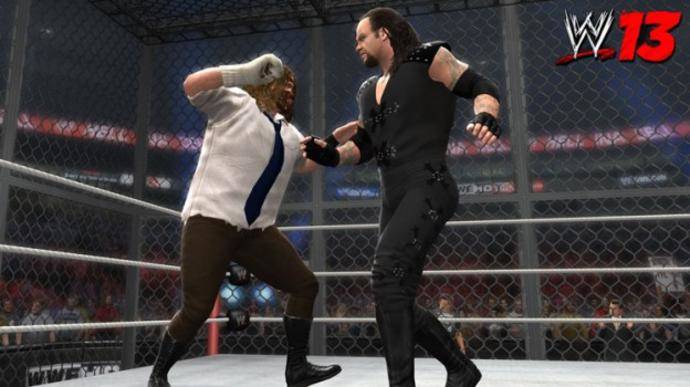 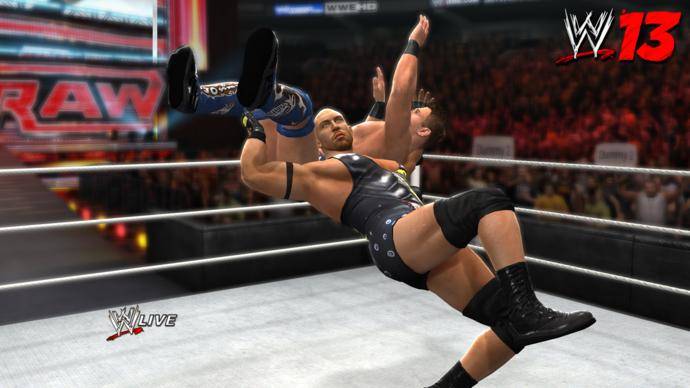 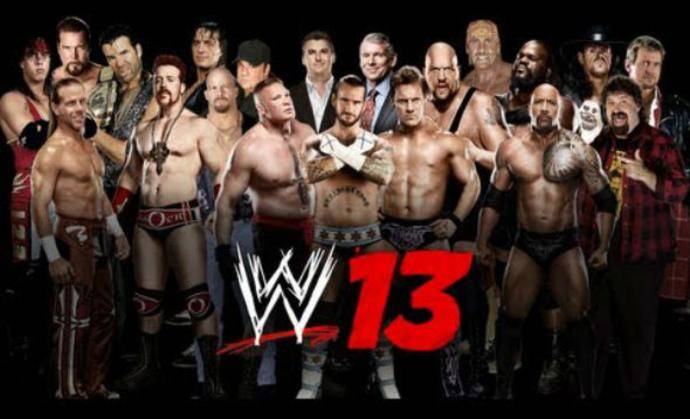 The WWE games have come a long, long way when it comes to gameplay, although I’m not sure that this game really is a vast improvement over WWE ‘12. This is what is to be expected from a yearly series of games that are rushed out the door, but that isn’t to say that there weren’t some improvements. The refinement of the in-ring action and the grappling system shows through, as does the fact that the striking seems to actually work pretty well. The in-match mini-games are a lot less intrusive than in the past, as are any of the on-screen prompts. They always talk about improving the AI in the game, but the reality is still that the AI is pretty brain dead. Your average Heavyweight “Heel” AI opponent is going to go outside during every match and rip the top off of the announce table, even if it makes no sense in the context of the match.

The name of the game is reversals, reversals, reversals, even when it makes no sense. Without adjusting the sliders in the options menu your matches will be full of reversals, which THQ sold as “chain wrestling,” and it does indeed look pretty cool for the first dozen matches you have, then it becomes a bit cumbersome and you’ll find yourself turning them down to get more realistic matches. There are some really unsightly glitches, some worse than others, throughout the gameplay. Stuff like there really are no two-counts in near falls, only one counts, really shows up as a glaring omission. You get a ton of modes for exhibition matches, though, including all sorts of gimmick matches, which everyone will enjoy, the only bummer is that they culled the regular “Road to Wrestlemania” story mode to add in “Attitude Mode.” Attitude Mode is actually a pretty cool addition and takes you through some classic WWE storylines from the late-90s/early-00’s, including the formation of DX, Stone Cold’s rise to the top, the Brothers of Destruction and a whole lot more. It is a worthy replacement to the usual single player mode that is offered and some good nostalgia for fans, but there is still this empty feeling that you can’t play through a more cohesive season mode. That is where Universe Mode is supposed to step in, but the reality of Universe Mode is that it is kind of a mess. Universe Mode is where you set your shows, your roster for each show, choose your logos and everything else and run events. There are storylines that show up during the course of your playing through every television show, but they are random.

The problem with this mode is that a lot of the storylines are only accessible for the preset characters in the game, not the user-created characters. Stuff like branching storylines and the more advanced stuff outside of pre- or post-match attacks don’t seem to happen for user-created characters, which is sad as one of the draws to the mode was using all of your own characters throughout the mode. There are also some weird glitches like some of the branching modes turn the screen black and you have to just hope you are picking what you want or if you use a custom logo on a custom ring the whole mode will just crash and not work.

The visuals in the game are nothing mind-blowing and pretty par-for-the-course when it comes to this series. The usual improvements have been made to the default models and textures and there is a new coat of paint on the whole game. For this late in the current gen’s lifecycle this is about as good as you can expect, so it is hard to really complain about it. What you can complain about are some of the glitches that occur. I’ve had characters get pushed into the crowd, parts of models “stick” to the ropes and cause them to stretch all over the place and a lot more. One of my least favorites has to be when you double stack tables and only the top one breaks, but the bottom one gives out, it then gets glitched into the ring and becomes a “dead zone” in the ring where your character gets damage by stepping on it and if he falls on it he becomes lodged into the ring.

Once again, nothing mind-blowing and par-for-the course. The music is pretty awful unless you tend to find yourself jamming out to modern WWE superstars’ entrance themes and the announcing is still a bit awkward in places. The crowd sounds are great when they work, but in Story Mode they tend to disappear completely during matches. Another interesting problem is that the cut scenes in Attitude Mode are a lot louder than anything else in the game and don’t follow any of the rules.

The online modes for this game are great when the servers aren’t as slow as molasses. The ability to share and download characters, Storylines, rings, movesets and more is really a great feature. If you have friends who play you’ll find yourself putting together ridiculous gimmick matches and having tons of fun. If you feel like being competitive that is an option, but I’m not sure that the gameplay lends itself to competitive gameplay and you’ll just see tons of running grapples.

WWE ‘13 is an interesting way to cap off THQ’s tenure with the WWE license. There is a lot of good in the game and there was definitely some effort that went into this game, you can tell. There are just some gameplay glitches that really make some of the modes cumbersome or unplayable depending on your tastes. With the license moving to 2K don’t expect any more patches for this game, just love it or leave it as-is. If you are a fan you’ll probably enjoy it no matter what, though.