Call of Duty has become a yearly phenomenon, breaking record after record on an annual basis. Black Ops 2, the latest in the series, is no exception, bringing together an action packed single player story and a set of chaotic, fast paced multiplayer games to create what is arguably one of the best arcade shooters of this generation. The addition of Treyarch’s popular Zombies mode is only that stretch extra. Call of Duty may have its fair share of detractors, but it remains one of the most popular games in the world, and deservedly so.

When you hear people talk about Call of Duty, it’s rarely about the single player. Although it’s never any worse than the tripe that fills the FPS genre as a whole, the fact that it’s overshadowed by its iconic multiplayer makes the story less important. That’s a shame, because they’re really not all that bad, especially in Treyarch’s efforts. They tend to go for a darker more character driven story than Infinity Ward, and Black Ops 2 is no exception. 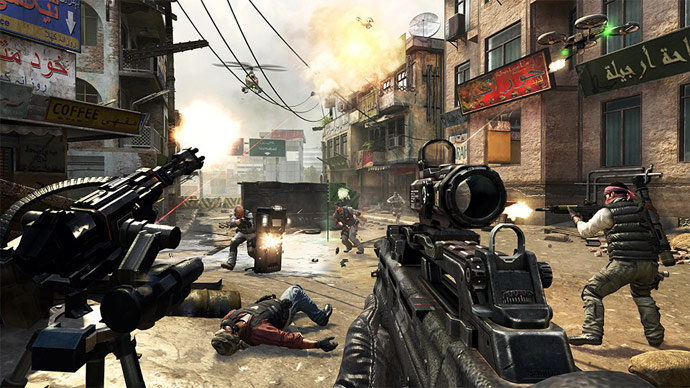 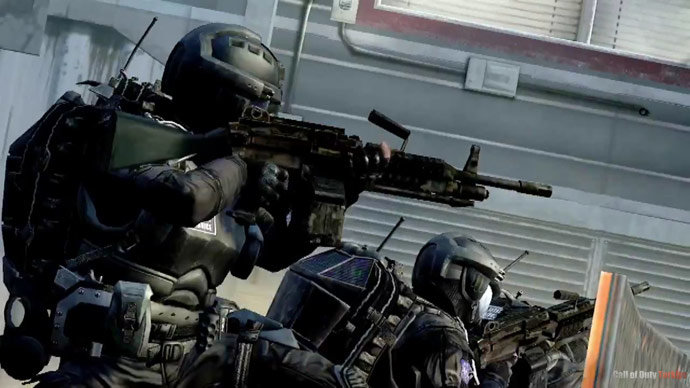 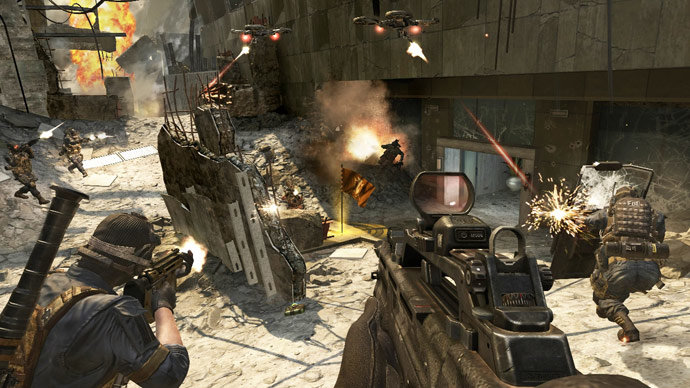 Set in the not-too-distant future, you’ll be sprinting to cover across a variety of battlefields whilst using a bevy of sci-fi inspired weaponry and gadgets. Although it’s not delivered on a Ghost Recon scale, most levels offer something cool to play with and most work beyond your expectation. There are also levels set in the past and, again, the things that Treyarch have decided to do is at the very least interesting enough to keep you playing.

Anybody who has ever played an offline entry in the Call of Duty series knows that the story mode is often only a few steps away from an on-rails shooter. The path ahead of you is incredibly linear and your reward for straying off the beaten track on higher difficulty levels will be instant death. The developers have tried to shake things up a little by having branching storylines. This is a nice way of adding some replay ability to something that’s usually one-shot (if that), but that’s all it is.

The linearity has its purpose though: the set-pieces are as fantastic as ever. People disillusioned with the franchise or genre will see more explosions, more shades of grey and brown, but those who are happy with what they’re getting will be rewarded with hours of popcorn action flick mayhem.

If you’re a Call of Duty fan, the bulk of your time with Black Ops 2 will probably be spent in the game’s multiplayer modes. Like previous entries in the series, all the standard game modes are present. Team Deathmatch, Free-For-All, Domination, Kill Confirmed and Search and Destroy are all back, along with everything else you’d expect. There are some new modes and even a new tournament option that places you in a league, but most people will probably stick to what’s comfortable.

And that’s really the key to Call of Duty’s success; within seconds of getting into your first match, you’ll be right back on the ball. Controls feel natural, weapons easily used and very little is put in the way between you and a kill. It can lead to cheap kills and a distinct lack of teamwork, but arcade shooters aren’t exactly known for their deep gameplay. There’s a skill in knowing the maps, in reading situations and getting that good takes an awful lot of time, but Black Ops 2 is the sort of game that soaks up a lot of time.

The maps are much better than those in Modern Warfare 3, which I always found to be dry. Although Black Ops 2’s maps aren’t as whimsical as those in Black Ops, there’s still a nice attitude to them. There’s a nice variety of maps that cater to both close quarters and long distance play, although there’s a lack of arenas that cater to both at the same time. Unfortunately, the difference in map sizes means that some maps are voted against on a regular basis and you might find yourself replaying the same three or four places time and time again.

Perhaps the biggest change is in the way you kit your character out. The point system allows you to create a class that matches your playstyle. If you’re not interested in secondary grenades, trade them towards an extra perk. If you never use a secondary weapon, get rid of it and have an extra attachment on your first weapon. This allows for an awful lot of customization, although I imagine the average player will want to just stick with the stuff they know they can get kills with. I found that weapons were fairly well balanced, at least I never felt at a disadvantage for using a certain weapon.

The one thing that bothers me about the online portion of Black Ops 2 is that even four months after launch, there’s still a pretty hefty lag on the multiplayer. It doesn’t bother gameplay too much, but there are times when it’s really obvious and if it isn’t fixed by now, I can’t see it being fixed any time soon.

Zombies has been made bigger in Black Ops 2, helped by the new Trazit mode. If you haven’t played Zombies before, it’s not unlike Horde mode in Gears of War. Waves of enemies are sent in your direction and you must survive as long as you can. The only thing that makes Zombies mode special is how hectic it can get and, ironically, how well it brings people together, forcing them to work as a team.

Tranzit gives you the option of fighting over a huge map connected by a bus. Although it sounds open world, it’s not really. Think of it more as a set of interconnected levels, separate but with a kind of joined continuity. Items in area one might help you in area two, two players might be battling it out in one area whilst the other two are in another, that sort of thing. It’s good fun, but not really any more so than just regular Zombies. For the people that loved the more story driven maps in previous games, this one might appeal to you.

A couple of added modes introduce 4 V 4 V zombies, but it’s not nearly as fun as it sounds. There’s not much in the way of interaction between teams and it suffers as a result.

Call of Duty isn’t known for its flawless graphics, but Black Ops 2 manages to continue the tradition of being more than passable (and at an occasionally shaky 60 fps as well). We’ve all heard the horror stories of “sub-HD resolutions” and “reused textures,” but it doesn’t often show and it looks good enough to play without any ugly interruptions.

Black Ops 2 is basically an action film and the cast do a great job of bringing that to life. The characters are gritty but believable and the actors put that across well. Music is fantastic while playing, enough to get you suitably emotional, but its unlikely to offer much to put on your iPod.

I buy Call of Duty every year because it’s one of the few shooters that allows online split screen and decent international matchmaking. And that’s what I get out of it – it’s basically a social game and we play for a hundred hours or so every year and it’s more than worth it. If you play that hundred hours alone, in a darkened room, over the space of a few weeks, I can’t imagine it’ll retain its high quality.

Love it or hate it, with Black Ops 2 you know exactly what you’re getting.