The Evil Within Review

The Evil Within Review

The Evil Within manages to revive some of the best parts of the Survival Horror genre with its dark brooding atmosphere and classic elements of gameplay. Scavenging for supplies and fighting your way through a detestable world hasn’t been this much fun since Resident Evil 4 and Silent Hill 2. The world that Shinji Mikami The Father of Survival Horror has created cleverly combines a tasteful amount of stealth and action sequences that gives the player a great sense of awareness of the world they are traversing. The Evil Within allows the player to choose to sneak past enemies, take them out with stealth kills, hide under beds and in closets, or go in with guns full blazing with an array of weapons such as a Magnum Revolver and The Agony Crossbow. The gameplay itself is gripping and will keep you engaged until the end credits.

A Return to Evil

While the Evil Within is a lot fun, it has stripped away many of the layers that have been added to the Survival Horror Genre over the years and doesn’t really add anything new to this somewhat static formula. The gameplay is stellar, but The Evil Within relies solely on these mechanics, which might feel a bit archaic to players looking for that next gen appeal. As a result, what is lost at times are the story’s plot, its characters and their purpose for journeying through a 20 hour adventure into hell. Longtime fans of the Survival Horror genre will find a lot to like as The Evil Within, with its old school control scheme and excellent gameplay truly get back to the roots of what made the genre so appealing in the first place; however, because of the weak plot and lack of character development, new fans to the genre may be left wanting something more.

The Characters and Their Realm

The Evil Within begins when Detective Sebastian Castellanos, his partner Joseph Oda, and rookie Detective Julie Kidman are called in to investigate a gruesome mass murder that has taken place at Beacon Mental Hospital in Krimson City. They encounter a malevolent force during their investigation and they are soon caught up in a nightmarish reality looking for escape.

You take control of Sebastian (Seb, as hes referred to throughout the game), a washed up detective of the Krimson City Police Department turned aging alcoholic after a number of personal tragedies tore his life completely apart. Seb is tired and callous and nothing seems to faze him in this nightmarish world. He is actually a somewhat boring character that remains static throughout the game. He never grows, he never shows any signs of fear or anger, he is just along for the ride and his demeanor is forgettable. I was in awe when I was being chased by dozens of nightmarish creatures while walking through a room composed of human body parts as Sebastian reacted as if he were walking through a park.

However, in this unparalleled realm of human experience, his calm is what makes the player advance, and it works because I felt that I could live through it as him and come out of it unscathed. I never felt bad for accidentally dying on Seb’s behalf as I did with Resident Evils Jill Valentine or Joel and Ellie from The Last of Us. The main issue with Seb is that, in a world of boring action stars that exist in video games, it feels that there just isn’t any room for another. Seb’s partners, Detectives Julie Kidman and Joseph Oda, provide him with some support by randomly appearing throughout the game to either help out or by becoming captured and needing to be saved. Their characters feel even less memorable than Seb’s, as we only experience them as side characters. When they go missing, I never seemed to care much for their whereabouts. 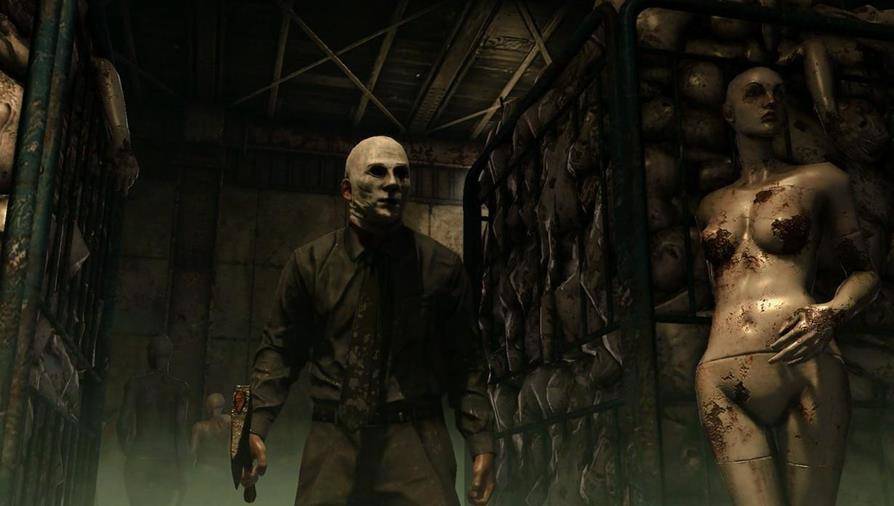 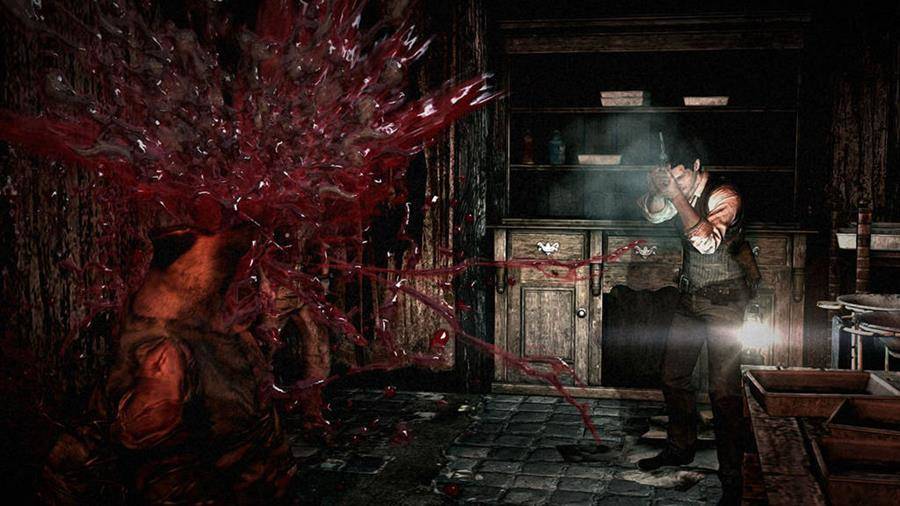 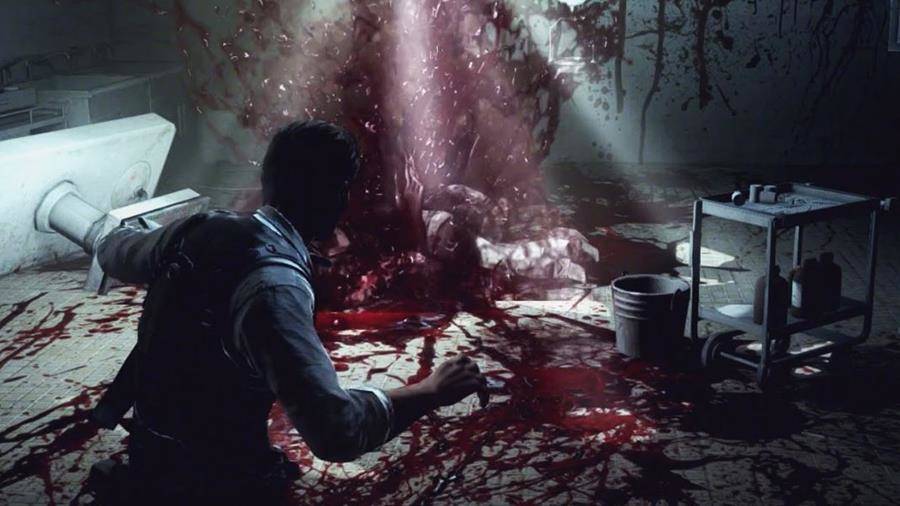 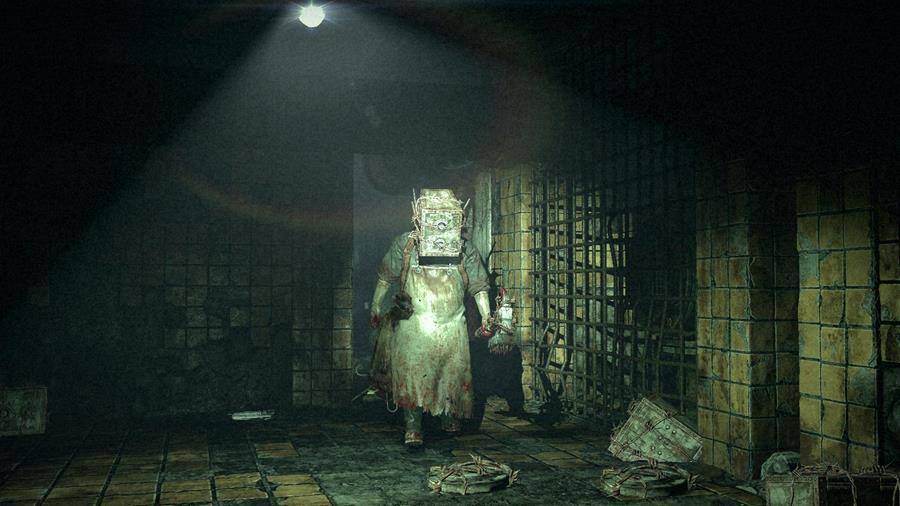 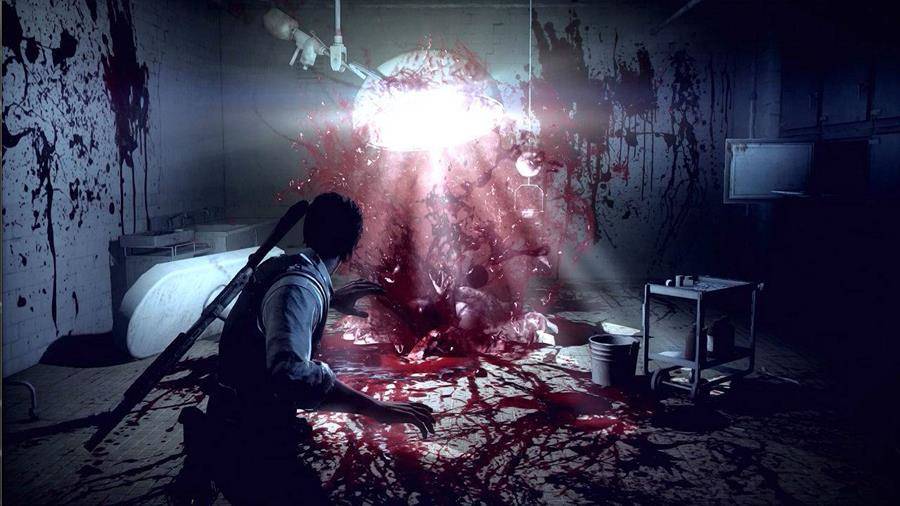 The main plot begins to unravel and fall apart rather quickly, and within the first few minutes of the game I had no idea what was going on. Overall, the plot seems to have been written to make the player feel lost several times. This is a common strategy seen in horror films to keep viewers engaged; however, this is not as effective in video games because, just when you feel like you have a grip of what is going on, it changes, and the result is that you just lose interest and only care about the action or environments that are in front of you. For example, major story arcs happen one moment and when you begin to feel involved with the story and characters, the chapter will end, and you will be in a completely different location that has nothing to do with what you experienced moments ago. Characters and locations come and go sporadically. The only constant throughout the game is its gameplay, and that’s what continues to keep the player grounded and engaged.

The Evil Within controls like a classic Survival Horror game with an over the shoulder view ala Resident Evil 4 and Dead Space. However, Sebastian feels heavy when moving around the world, and stripped from the game are the modern elements like QTE moments that one would expect from a new Survival Horror type experience. Sebastian tires easily and there are no dodge functions; the expected 180  quick turn is non-existent and most enemies seem to move faster than you. You will constantly be flicking the camera all around Sebastian as you never know if something is creeping up behind you. Some have been overly critical of this aspect of the game; however, I feel that it adds to the horror elements of the gameplay and that too much control is the reason the Survival Horror genre has become stale.

You play in a world without control so you have to account for how much stamina you have. Upgrading stamina with the Green Gel found throughout the levels will become a matter of life or death. Sebastian has a melee attack but it is worthless and should only be used in that desperate moment when an enemy is about to attach itself to you.

This gameplay is favorable compared to Resident Evil 6’s heavy melee attack that allowed the player to kick off the heads of Zombies with ease. The game will have you shooting hordes of zombie-like enemies called The Haunted that can chase you, dodge bullets, and even throw dynamite and shoot back. They will hunt you in the dark and your lantern will always notify them of where you are, so there are times that stealth is a must, but there are other times when you have no other option but to shoot your way out. This is what makes The Evil Within so enjoyable.

The Evil Within has an upgrade system that really adds a lot of depth to the experience. As I mentioned before, you search for containers of Green Gel, which acts as a currency in the sense that will allow you to upgrade varying aspects of Sebastian. You can choose to upgrade abilities like sprinting stamina or melee damage, add more health to the health meter, or upgrade your weapons and ammunition so that your shotgun can reload quicker and your handgun can hold more bullets. The options are what makes the gameplay evolve and though it is not revolutionary, it is a welcomed concept that has been added to the survival horror genre years ago and works particularly well here. There is never going to be enough Green Gel so you will have to make every vile count as you select what is the most important aspect to your play style.

Another interesting gameplay mechanic comes with upgrading the Agony Crossbow. There are hidden traps throughout the levels like motion detection bombs that will begin to beep if you’re within proximity of them, trip wires that are attached to alarms, and bear traps that will hold you hostage for a few moments. If you successfully disarm these traps, you salvage materials that can be used to create various Agony Crossbow Bolts ranging from Exploding to Harpoon ammunition. The Agony Crossbow is extremely effective against enemies as you can potentially blind them or freeze them, giving you precious seconds of survival when it matters the most.

The Sights and Sounds Consume You

The Evil Within looks absolutely fantastic on Xbox One. The lighting and particle effects are outstanding. There were moments when I forgot I was playing a game and not watching a movie. I felt completely immersed in the experience as I was sneaking through an abandoned hallway with the light reflecting off of the puddles of blood on the ground and the swinging overhead lights revealing more of The Haunted lurking in the shadows. The unknown environments come alive, and as they change and twist in grisly ways they all look fantastic. Probably one of my favorite moments was near the beginning of the game where I was exploring a pitch black forest. Thinking I was alone, I ran ahead searching for an exit when lighting lit the area, revealing several Haunted waiting for me with their half missing faces, grins, and hatchets. Then it went pitch black and I became fully aware, because in that moment, I felt truly outnumbered.

An atmosphere is made by its sound, or void thereof, and The Evil Within delivers.  As you’re crawling through the caverns of the Beacon Memorial Hospital there will be nothing but the grisly sounds of enemies nearby and the mechanical sounds of nightmare. The Evil Within’s superb soundtrack was composed by Masafumi Takada (Resident Evil: The Umbrella Chronicles; Killer 7) and showcases his masterful understanding of sound that illustrates his knowledge of industrial ambiance.

This is mixed with Claude Debussy’s Clair de Lune which plays randomly in the background, getting increasingly louder, letting you know you’re close to a save room. This is reminiscent of classic survival horror games that rely on their environments for sound. The Evil Within provides a haunting audible experience that is laced with subtle notes of an airy wisp and ranges from silence to a full blown orchestral onslaught, which really heightens the experience.

A Second Time Around

After you beat the main game, consisting of 15 chapters, you will be allowed to continue your game with a New Game + option. You can revisit any of the completed chapters and hunt for Green Gel to level up your abilities or hunt for additional Achievements. You also unlock the Nightmare difficulty, which promises to provide an experience that will have you facing a multitude of deaths. A season pass is available consisting of 3 announced DLC story missions that add to the worlds gameplay mechanics and, hopefully, the developers can add to the story to make it a more coherent experience.

Of the announced DLC, the first will be The Keeper where you play as one of the enemies of the game and the second and third will revolve around Julie Kidman. Her campaign will be split into in a 2 part story mission that will hopefully shed some light on The Evil Withins back story. Dates for these haven’t been announced, but Bethesda has said that they should all be available by at least May of 2015.

The Evil Within Review – Conclusion

Shinji Mikami’s The Evil Within masterfully blends the action horror aspects of Resident Evil and the iconic psychological horror genre reminiscent of Silent Hill. Throughout the roughly 20 hour campaign, you navigate through an atmosphere that makes you clench the controller tighter at every turn, as you explore a deteriorating world that is dark and terrifying. The Evil Within feels like a haunted funhouse for old school Survival Horror fans who will be pleased that the genre has returned to the very roots that made it so gripping in the first place.