Are you ready to survive?

Most zombie enthusiasts have asked this question many times thinking about a zombie apocalypse. Zombies have a huge following and inclusion into all popular forms of entertainment – from comics, novels, television shows, movies, and video games. Zombies in today’s entertainment are very popular and have been around for a long time. It looks like they aren’t going away any time soon. State of Decay is a zombie game that focuses on base and community building, survival tactics, stealth and going through the world during a zombie apocalypse more than actual zombie combat.

State of Decay originally released in 2013 on XBOX 360 has now been re-released in 1080p as State of Decay : Year One Survival Edition for XBOX One, with three playable options to select in the game. The first option is “State of Decay”, which is the main campaign, second is a sandbox style of play and the third is additional story and campaign.

Plenty of tools for Survival

The sandbox style of play is called Breakdown, the name is very fitting as its involves your character leading a group of survivors to escape the valley but first they must fix the RV they are traveling in to escape. This mode has no story line whatsoever, but offers endless game play allowing you to put your survival to the test and your skills on the line as you progress through six levels to survive in. As you progress, naturally the difficulty will increase with stronger and a higher amount of special zombies. The best approach is to use distractions and stealth around the levels to advance further in this mode. One additional item you need to advance is the RV itself which spawns in a different location on every level. Once you make it to the RV you move forward.

The third mode called Lifeline, included in State of Decay : Year One Survival Edition is the additional story mode which shows you from the Military’s perspective how all of this came about. You will play in a unit under the name Greyhound One set in a fictional city, Danforth City, and are tasked with keeping survivors alive as long as possible to get them to safety. Lifeline also tasks you with setting traps and planning tactics to defend your main base.

Along with the two other features included, we have the meat and potatoes, the very reason why we are playing this game. What Undead Labs managed to do to keep State of Decay unique was add in all of the thought process that you would experience if this was really happening to you. This game is much more than slaying zombies and running away. 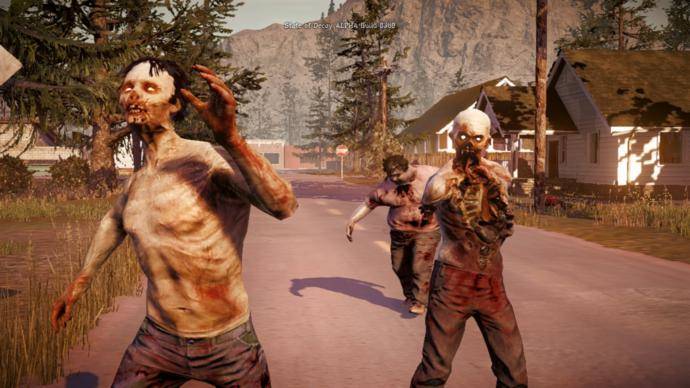 As you begin your story you are tasked to visit the Ranger Station, greet those in the Station and then go out to survey the surrounding area from a tower. You survey the areas a lot in State of Decay to identify what is near you in order to avoid or proceed to that area for survival. What I really liked about this game was that you really could go a long time without actually going after zombies as most of your missions are to carefully sneak around, gather supplies, save survivors and manage your safe house.

State of Decay is an open world so if being safe and careful isn’t your cup of tea you could go on a tirade instead. As fun as the story is, sometimes its a good thing to take a truck, drive around, smash into a horde of zombies and worry about the insurance claim afterwards.

Blood, Guts and Sounds of Glory

Splat, smash, crunch and scream are all sounds you normally hear in a zombie game. In State of Decay you get so much more. The rev of a car engine, followed by a crash if you speed and lose control and then a splat when you run into a zombie is much bigger and more enjoyable than other zombie games I played in the past. Undead Labs also did a fantastic job with the scenery, as they really set the tone for an apocalypse with the dilapidated buildings, dark rooms, and hundreds of groups of the dead roaming and running the Earth.

As a huge fan of the horror genre, this stands out as one of my favorite horror and survival games. Zombies are seen all over the place in entertainment but State of Decay is unlike any other zombie game of recent time. Having spent about seventy percent of the game gathering supplies, surveying the areas for survivors, building on the safe house and increasing my characters abilities, the rest of the time was spent progressing in the story and killing zombies. Its a fun and exciting game with new tricks you haven’t played before. You need to be a lot more careful in State of Decay and use your brains more often. Pick it up and enjoy, especially with the lights off!