I’ve longed for a tycoon game on Xbox One; Zoo Tycoon didn’t really do it for me. I was intrigued by Screamride and its roller coaster building, but I wasn’t sure how well that would translate as a stand alone game, outside of full park managment. My worry was unfounded; Screamride is one of the best games out on Xbox One and one that creative individuals will adore.

There isn’t anything ‘tycoony’ here. It’s just construction, riding, and destroying. On paper it actually doesn’t sound like something that would be that fun. Sure, I often built ultra-insane coasters on Roller Coaster Tycoon, or built coasters that would inevitably crash. But that fun lasted 30 minutes, tops. So could Screamride deliver an experience that would keep me intrigued for hours on end?

I didn’t follow Screamride very closely leading up to launch because I was not that interested. However, from the little I saw I assumed that it was just a coaster builder where the goal was to build extreme rides with (sometimes) destructive results. I was wrong. Screamride is comprised of a number of episodes each comprising three separate ‘events’: Screamrider, Demolition Expert, and Engineer. 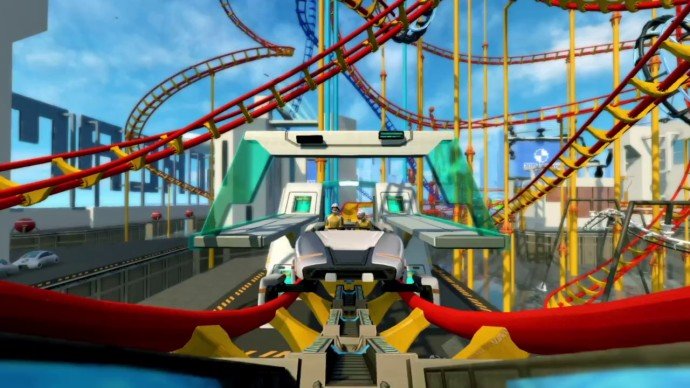 Screamrider mode allows you to actually ride the coasters that come pre-built in the game. There are a number of goals to achieve and points to score. Scoring points and completing goals will get you closer to completing a track 100% – think collecting 3 stars in Angry Birds. You score points for hitting boosters correctly, achieving high end speeds, riding on two wheels, and staying ‘on the rails.’ It’s a lot more fun than it sounds, although attempting to complete a track 100% can be tedious and can take multiple attempts. Fortunately, friend leaderboards keep players competitive, pushing through the menautany of replaying a track again and again. I liken the competitive nature of this game to Geometry Wars, which is a high praise for this title. 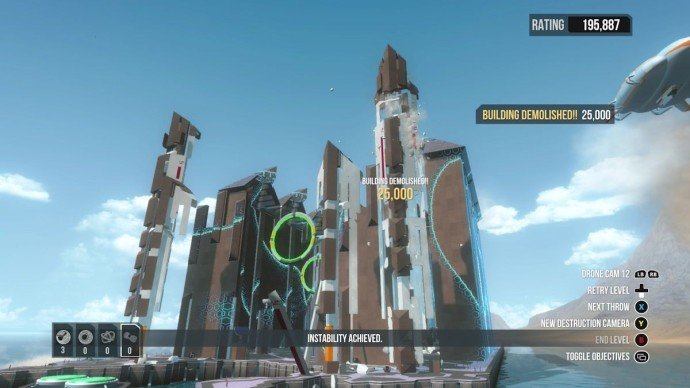 This mode reminded me a lot of the old, Super Monkey Ball party games. I sat around with friends playing Demolition Expert for hours, each of us trying to top each other with our final score. Roller coasters do not play a role in this mode. Instead, a spinning arm is loaded with a round shuttle (ball) which you then launch at buildings located around the map. As you progress, you will unlock different types of cabins. Some will break apart into multiple peices whenever you choose to break them apart, while others are required to break through specific types of walls. Some skip of water while others sink. The controls are easy to get a hang of, but timing your launches can be the difference between earning an extra 100,000 points or not.

The other great feature that is most noticeable when playing this mode is the destructible environments. The buildings crumble in a realistic way, and trying to pin point exactly where to hit a building to destroy as much as possible almost becomes a fine art. The controls given after the ball is released also allows for strategic planning. 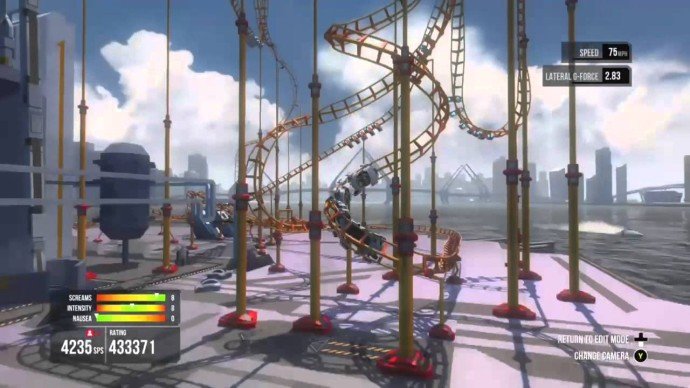 I’m not a creative person at all, and for myself, this was the weakest and least interesting mode. However, I feel like I’ll definitely be in the minority. The building controls are very easy to understand, but it takes hours to fully know all the pieces at your disposal – some of which you won’t have unlocked yet if playing in sandbox mode, depending on where you are at in the game. Creativity and patience is a must, and without one or both of those, you won’t find much fun here.

Fortunately, they guide you well when attempting to build coasters, and have added a handy “finish the track” button for when you are close to finished. For this review, I attempted finishing a track without using the button, and it can be tedious trying to line things up correctly. The camera control in this mode is also second rate. While the camera in the other modes might be equally bad, it really comes to light when trying to construct the perfect roller coaster.

There is a lot of fun to be had in this game, even if creating your own roller coasters isn’t your idea of a good time. Screamrider and Demolition Expert are enough of a reason to shell out the money on launch day. If you fondly remember competitively playing Burnout with friends, or if you loved duking it out in Super Monkey Ball party challenges, you’ll find some similar experiences here. The game is fun to watch, fun to play, and most definitely fun to compete in. Whether on the couch with your friends, or online via Xbox Live, there’s never a shortage of competitive options.

Screamride also keeps my hope of seeing Roller Coaster Tycoon on Xbox One alive. I can dream, can I not?