OlliOlli on Xbox One has been guest reviewed for Games Reviews by Danny Petsis.

OlliOlli is a 2D skateboarding game that has been around since early 2014 but finally made its way via port to XBox One in March of 2015. It’s been a long time since we have seen a skateboarding game of value. There has been the Skate series (Skate, 1, 2, 3 released 2007 – 2010) and before that, Tony Hawk’s Pro Skater 4 released in 2002. In between that time there hasn’t been anything great. OlliOlli is now skating its way onto the scene. 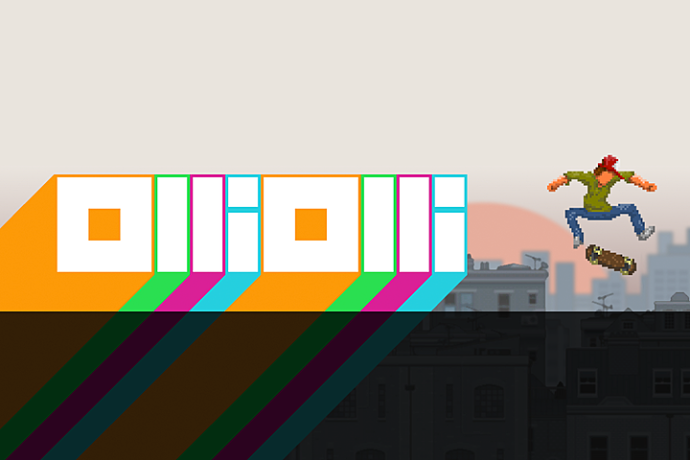 OlliOlli is a side scrolling skateboarding game, with a single life as your health that sees your run ending if your skater wipes out for any reason. Using the left analog stick you perform the grinds and any tricks, with bumpers (LB, RB) controlling your spins. The landing of each trick must be perfectly timed by using the A button. The closer your skater is to the ground when you press the A button, the better the score and the landing will be. Your goal is to achieve perfect landing combos to increase your score and speed before moving onto the next rail, concrete wall, automobile, etc. You can also achieve a “Sketchy” score for messing up a landing, an “OK” score for a moderate to average landing, your next best rating is “Sick” and finally “Perfect”.

Grinding also works identical to the landings. To achieve higher scores and speeds you need to grind perfectly from object to object. Landing on a railing without perfection will only slow down your skater. The best way to keep up your score is to continuously land combos from one grind to the next and be sure to land a perfect or sick landing.

Aside from the scoring system in OlliOlli you also are playing to unlock the next levels by reaching the end of the current level. There are five amateur challenges to beat in order to unlock a “Pro” mode of the level. The “Pro” levels also contain five more challenges each; beat those to unlock “Rad” mode which is an extremely difficult challenge to achieve. The purpose of “Rad” mode is to complete one endless run of each level with perfect grinds and landings. One misstep and you will wipe out.

The final portion of the game comes in the form of a leader board score. Each level has something called a “Spot” mode, and its similar to the “Rad” mode where you go through each level landing one really long combo and once you finish your time is up, score is calculated where you ended up in the level and you are placed on the leader board and ranked.

The Best way to Screw Up: Focusing on Graphics and Audio!

The graphics of this 2D skateboarding game can be a bit of a distraction at first. They are pleasing, so don’t get me wrong, but you want to see the color in the skyline background or what is ahead of you in terms of the trash you need to jump over or the bus you can grind on. However, once you take your eyes off the skater and focus onto something else you lose your footing and wipe out. Overall the graphics look clean and colorful and there are many details throughout the game that are nice to appreciate when you first start, but inevitably your focus will be on your skater.

You can really hear the bone crunching sounds anytime your skater happens to wipe out. If you had a lot of speed going into your fall, the bailing out seems like it won’t end. However, once your skater finally takes to his last face slide, you can restart the level and try again. The soundtrack is another good quality of the sound in OlliOlli and is really fun to skate to. A compilation of dance, house and a little pop music makes it fun to turn up the sound while you get your skate on.

For the current price of $9.99 OlliOlli provides a lot of fun. The first twenty minutes are the most frustrating but once you get the hang of it, it’s an addicting game that will make you want to land those tricks or beat your previous score. You will find yourself pressing the reset level button if you aren’t happy with how you started a level or final score. The game can be replayed many times over and has a lasting appeal. OlliOlli will be around my library for many months to come and I look forward to the sequel.