January is a pretty quiet month generally for the video game community. Most people are working through their holiday backlog so games usually don’t release until February at the earliest. However, indie developer Crowd of Monsters is releasing Funk of Titans this Friday for Xbox One. This [email protected] game takes almost everything you love from ‘runner’ games on mobile and puts them on a console. While the game has its issues, the game will justify the price and will be the perfect addition for the mobile game loving, Xbox playing individuals.

Generally, a game like this shouldn’t do well on console. Fortunately for a Crowd of Monsters, there really isn’t a inexpensive game like this on the console, which is why their is plenty of positive financial potential. To describe it accurately, it’s a lot like Rayman Jungle Run on mobile and Rayman Legends on console, with a bit of Jetpack Joyride mixed in for variety. Let me explain.
To say their isn’t a game like this on the console would be not entirely true. More accurately, there isn’t a game on Xbox One like this, at this price point. The game could be accurately compared to Rayman Legends, although perhaps not as polished. Perhaps the minor issue receive a slight pass as the studio is working with a much smaller budget. 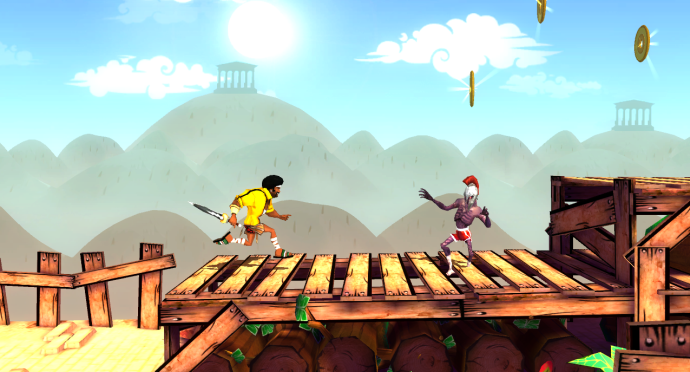 So what exactly is Funk of Titans. Well, you get to play a young man with a giant afro named Perseus. You are the son of Funk Zeus, and are tasked with returning Funk across three worlds: Pop, Rap, and Rock. The game is appealing in two ways, both linked to it’s simplicity. First, each level has three ‘trophies’ to collect: beat the level without losing health, collect all 100 vinyl records, and find the Pegasus statue. It’s simple, it’s straightforward, and it’s nearly impossible to get stuck. Secondly, It’s simple, it’s straightforward, and you can play it for five minutes here and there.
The game will probably take you 3 to 4 hours to complete – even longer if you try to do everything 100% – which is a decent length for an indie game. Their is some replay ability if you strive to collect everything. Each time you find a Pegasus statue, you get the option to play a Jetpack Joyride like mini game where you attempt to travel as far as possible while collecting vinyl records. It’s a nice addition, albeit an unnecessary one.
Collecting records has its purpose, although I felt the developers could have done more here. Records can be spent on different weapons or helmets that provide a more comic element rather than a practical one. Two or three specific weapons are needed to open up certain areas of any given level, but it’s only necessary every few levels and you don’t receive any warning for which weapon you should be using. Where you will want the items is if you are an achievement junkie. Certain tasks given by Zeus – which are a lot like Jetpack Joyride tasks – require you to use specific weapons and helmets. 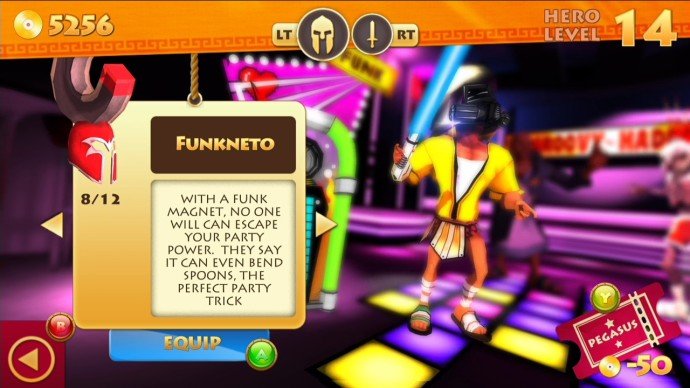 A Few Issues – But What Game Doesn’t?

The game has it’s problems, as most do. You are given two life points for each level. Once you lose both of those, you have to restart from the beginning. This is actually never a serious problem since each level take only a few minutes to complete. The issue is what happens when you lose your first life point. On occasion – for myself I would say about 10-15 percent of the time – you will get knocked back by an enemy or obstacle directly into another enemy or obstacle, making you lose both your life points despite miss stepping yourself only once. This isn’t because of a lack of skill. It just happens, and I really feel like it shouldn’t.
Another issue I had was the boss fights. While I understand the necessity of boss fights to the overall game, I think more could have been done with it. In both mid-world boss fights and end world boss fights, you are essentially tasked with pressing a sequence of buttons that appear on the screen. If there was a rhythm element to it, I missed it. If there wasn’t, there should have been. These levels were definetly my least favorite part about the game.
The final issue is the soundtrack. While the game is all about returning Funk to the ancient world, the soundtrack comes off as rather bland. In reality, this is a minor issue, but one that should be mentioned none-the-less. 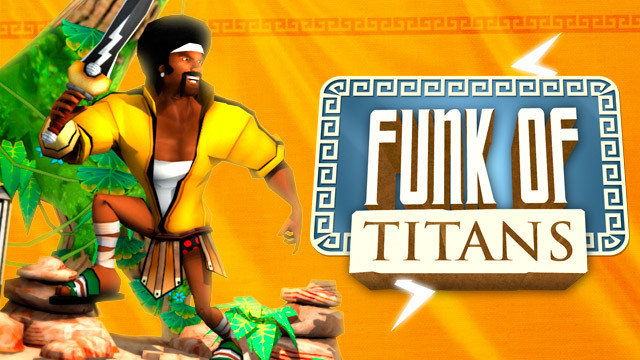 This is a game you should own if you are a mobile game junkie. It takes a lot of what you would expect from a mobile game and puts it on the big screen. The visuals are nice to look at, and the game play is easy and fitting for the experience. Although the game may be short, there is a fair amount of replay ability for those looking to go 1000/1000 on the achievement board. If you are looking for something to grab this January, look no further than Funk of Titans. A Crowd of Monsters has done a great job, and despite the issues, I cannot recommend this title enough.