It has been a long wait. It seems like years since we received our first screens, months since that detailed, energetic Nintendo Direct… Now, it will only be a little over a week before we can all play it. It’s almost Mario Kart time, and it just cannot seem to come fast enough. I had zero desire to sit down and write this up. I don’t want to tell you about Mario Kart, I don’t want to discuss Mario Kart, and I definitely don’t want to waste valuable time editing anything about Mario Kart. I just want to play it.Nintendo doesn’t waste time or resources when it comes to their most important franchises, and this has only meant good things for fans. Mario Kart 8 takes the Mario Kart series to another level entirely, both in terms of game play and visuals.

Stunning. If one word was required to describe Mario Kart 8, it would be that. Visually, Mario and friends have never looked better. This is the game that proves what the Wii U is capable of. Character models and karts have surpassed the look of kart titles on other platforms and environments are equally well done.

Nintendo doesn't waste time or resources when it comes to their most important franchises, and this has only meant good things for fans

Gone are the days of solid karts and characters colors that lack shadows and accurate effects. Gone are the days of boring and uninteresting areas surrounding the courses. While looking around when driving is never recommended, it is nearly impossible to appreciate the look of the game until you are merely a spectator without a controller.What sets Mario Kart 8 apart from Mario Kart Wii is not limited to the look of the new tracks. Nintendo has refused to do half the work with this title, despite the obvious understanding that Mario Kart is always destined to sell well regardless of how it looks. Instead of slapping old tracks into 4 course bundles for the various grand prixs, Nintendo took the time to re-skin all the courses with HD visuals, while also adding elements to some courses. Remember Dry Dry Dessert in Double Dash, with the quicksand you needed to avoid? Well, the end of that level on the GameCube had you dodging the cactus enemy Pokey while trying to weave through a few sand dunes. In the remastered level in Mario Kart 8, Pokey has been replaced by a pool of water, incorporating the ability to drive underwater which was introduced after Mario Kart Double Dash was released. Nintendo has proven to fans that although many are foreshadowing, if not already declaring, the Wii U’s death, they are dedicated to providing the best possible games for their system.

Mario Kart is built on a fairly straightforward karting experience. You start, you race, you finish, hopefully in first. Over the years, different game play elements have been added to make each title a little different than the last. Mario Kart Double Dash brought the now abandoned 2 character karts which made for interesting co-op experiences.  Mario Kart on the DS, 3DS, and Wii really experimented with linear tracks, rather then continuous loops. Almost every game has introduced a new item or two. Some of the changes to Mario Kart have stuck, while others have been abandoned. Mario Kart 8 continues the trend of innovation by adding a major game changing mechanic and a few new, although not always welcomed, items.Anti-gravity is new to Mario Kart 8. Driving over a blue strip on the track will cause your wheels to turn inwards and flatten, allowing the player to hover along the ground, on walls, and sometimes upside down. This allows for slick manoeuvres past enemies, as well as the ability to gain a speed burst when hitting other karts or items on the track. This new mechanic does enough to make Mario Kart 8 feel a bit different, but isn’t used too often to make it redundant.

It was nice to see Nintendo incorporate anti-gravity mode into some of its older, remastered tracks as well. It is the perfect balance of old and new.The new items in Mario Kart 8 are pretty awesome, especially the powerful air horn which allows players to finally ward off the dreaded blue shell. Other new items include a coin, which can be collected to unlock vehicle customization items, a piranha plant that attacks other players and eats up obstacles such as bananas, and the Super 8, a step above the seven item Lucky 7 from Mario Kart 7.Nintendo has also improved its online modes, allowing players to create their own Mario Kart tournaments. Nintendo has a new Mario Kart TV  feature as well, which allows players to upload their own karting highlight reel. Although I’ve never been one to dabble with video creation in any game, I can understand the appeal for others. Regardless, they are finally available, and extremely well done. A chat feature for the online modes is also included, although it is only available in the lobbies – chat is turned off when the races begin, most likely in an attempt to retain a family friendly environment.

Missing a Perfect 10 by a Hair!

Mario Kart 8 is not without its own problems. As much as I sat telling myself that this was a 10/10 game, things continued to bother me, albeit mildly. Three issues stood out. First, in past Mario Kart games, players could hold an item behind themselves as a shield while passing through another item box and grabbing a second reserve item to be used later. This has been removed from Mario Kart 8, and is incredibly disappointing.While Battle Mode has slowly faded since the days of Mario Kart 64’s Block Fort level, this mode has crept to the edges of potential obscurity.

Stunning. If one word was required to describe Mario Kart 8 it would be that. Visually, Mario and friends have never looked better

Gone are the interesting, battle specific levels. They have been replaced instead with portions of tracks already offered in the game. The result of this change is the inevitable boredom of racing down the track, turning around as quickly as possible, and heading back the other way, all the while attempting to nail opponents with green shells and bananas. It reminds me of a medieval jousting match. With Karts. And much less interesting.The final issue I had with the game is the almost useless coin item. Each track is stocked with collectible coins. Every fifty coins collected unlocks another kart customization option. 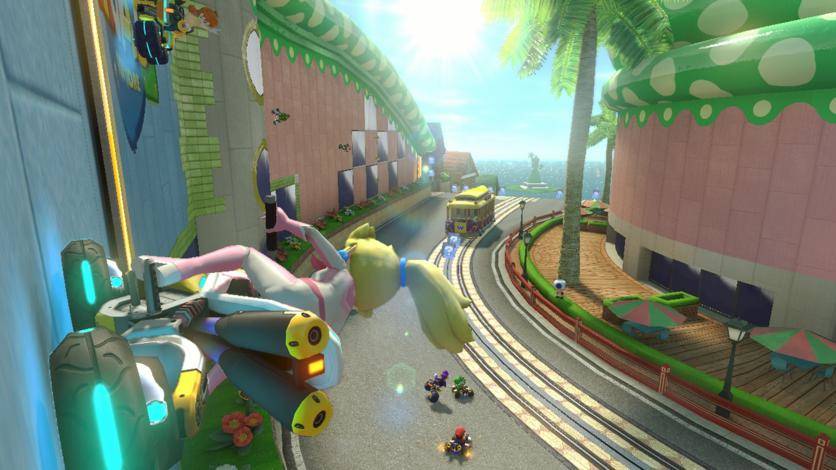 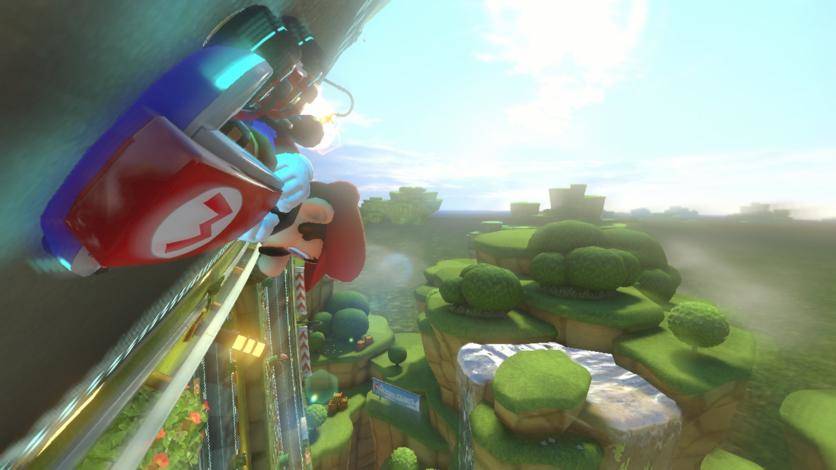 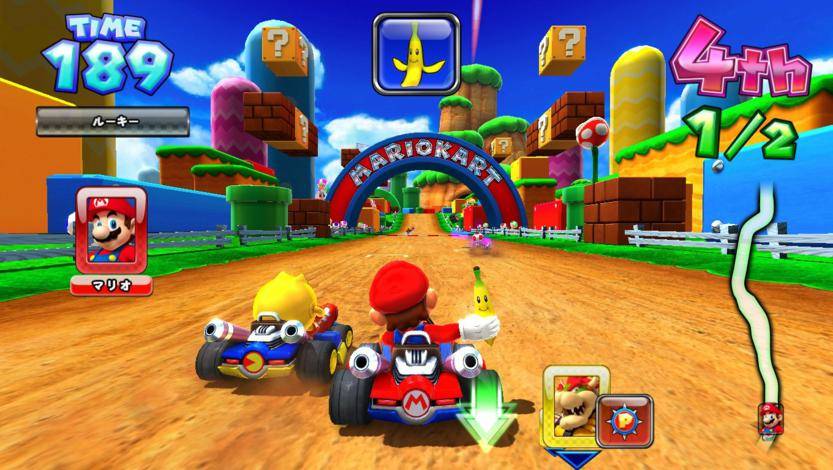 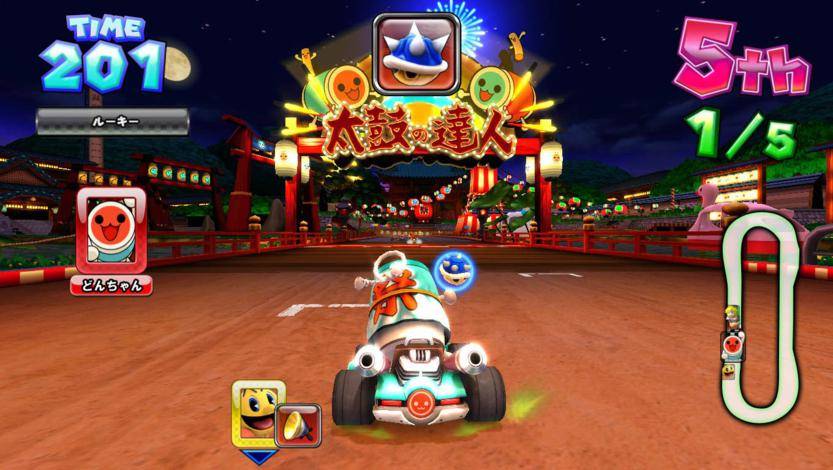 The issue is that players could potentially snag 20-25 coins per race if they were not hampered by a 10 coin cap. That makes receiving a coin, when in first or second place, on the last lap, with 10 coins already in your purse, incredibly useless. If the coin could double as banana type item, which could trail behind you and ward off a wayward green shell or sneaking red shell, I would have less of an issue. Unfortunately, if you already have 10 collected coins, it serves no purpose, and often led to last second defeats on 150cc.Although these problems seem major, the only one that continued to frustrate me was the coin issue, and hopefully this will be something Nintendo may address in the future.

Nintendo in a DLC World

Nintendo began adding extra content to their games within the last year. They added substantially to New Super Mario Bros U with a complete spin off game involving Luigi, and also added a few extra levels to Pikmin 3. Most recently, a 14.99 season pass was offered to Mario Golf World Tour players, giving them 6 more 18 hole courses and more playable characters. It would shock me if Nintendo did not continue their new found DLC love with Mario Kart 8. What that could be is still up in the air, although a mixture of new tracks and more remastered old ones for a good price could make Nintendo a lot of money.My real hope, however, is that Nintendo will use DLC and the ability to update their games to fix a number of the issues addressed earlier. Hopefully, Nintendo will remove the coin item, add real battle maps, and allow players to hold one item behind themselves, and one item in reserve.

Mario Kart is excellent. If you own a Wii U, buy Mario Kart 8. If you do not own a Wii U, buy the Mario Kart 8 bundle. Very few gamers, whether karting enthusiasts or just avid Nintendo fans, will be disappointed with this title.  Despite its issues, Nintendo has still released an excellent product once again.  Do yourself a favor and grab a copy when it drifts onto shelves at the end of May.