Kirby and the Rainbow Curse Review

Kirby and the Rainbow Curse

Kirby and the Rainbow Curse: Introduction

If you’ve never played a Kirby game then you are missing out. Whether they’ve been the best of the franchise, or in certain situations the worst, Kirby games always pack a powerful punch of cuteness and innovation. Kirby and the Rainbow Curse is no different, and is a must buy for any Kirby fan.

Kirby has traditionally been a platform genre franchise. Kirby moves through levels, swallowing enemies and taking over their abilities, and eventually completing each, varying world. Kirby and the Rainbow curse is not a traditional platformer at all, and those heading to the store thinking that it is are going to be in for a shock.

Full disclosure: I played Kirby at an E3 event in Toronto, Canada during the summer of 2014 and hated it. However, after many hours of playing in the comfort of my own home, I’m glad I’m giving this puzzle title – yes, I’m calling this a puzzle-platformer – a second chance. 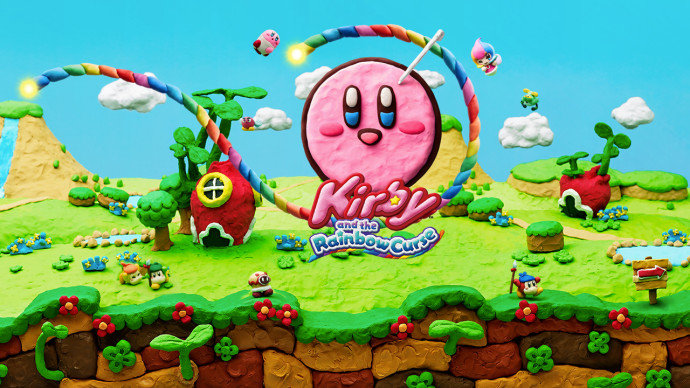 So what is Kirby and the Rainbow Curse? While the platforming elements that Kirby fans know and love are still apart of this Kirby adventure, reaching areas and manoeuvring across these worlds is non-traditional. Pushing left and right on the control stick won’t move Kirby left and right. In fact, you really don’t need the buttons at all: all you need is the GamePad and the stylus, making me wonder sometimes why this isn’t a 3DS game.

Players maneuver Kirby around the levels by tapping him and drawing lines with the stylus that help Kirby reach new heights. While the controls take a little bit of time to get use to, the end product  is rewarding and satisfying. The learning curve is steep. With only 28 (long) levels total, there is little time to waste on tutorials and how-to’s. Fortunately, worlds are littered with 1 Up’s, so it’s never a problem to try a section again and again. 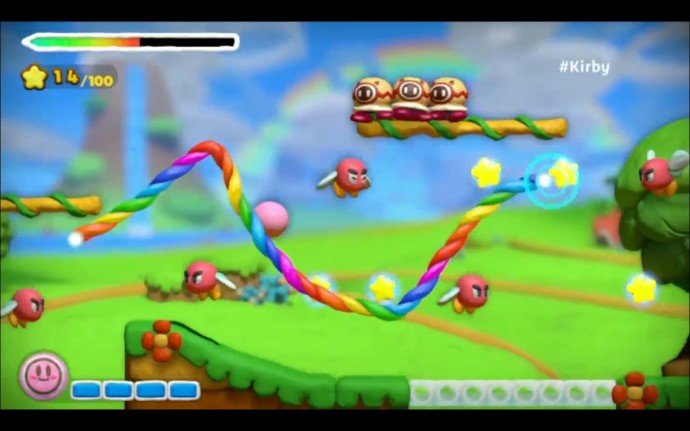 Kirby and the Rainbow Curse takes a lot of what made Kirby: Canvas Curse so successful on the original DS. However, a few added bonuses make Rainbow Curse feel different and better than Canvas Curse. Most notably is the ability to use the stylus to manipulate the gorgeous, claymation art style. Throughout the game you will see blobs of grey clay which can be manipulated with the stylus to unveil hidden items or secret passage ways.

This isn’t the only way the stylus is useful. Kirby cannot bypass waterfalls, and for a split second I was confused on what I was suppose to do. Then, I used my stylus to create a barrier to deflect the water, allowing Kirby to roll on past the obstacle. It’s small, but it’s a good use of the games controls. 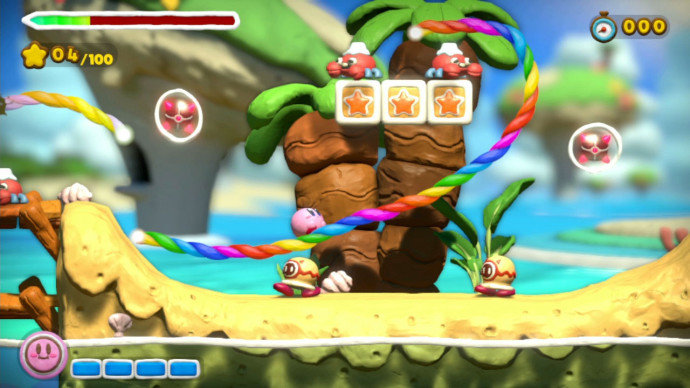 This adventure does a lot of things right and very few things wrong. The graphics and music are outstanding, some of the best stuff Nintendo has produced in recent memory. The controls are also great, taking full advantage of the Wii U Gamepad. The Multiplayer option is also a nice added touch.

However, I find that this game relies too heavily on the gamepad; I don’t even turn the TV on anymore, and this makes me wonder if Kirby and the Rainbow Curse might have been better suited for my handheld 3DS.

Kirby and the Rainbow Curse – Conclusion

Although the game took me about 8 ½ hours to complete, I feel like it flew by. Before I knew it, I had completed all 28 levels. The game offers a fair bit of replayability if you are hoping to unlock all the cute Kirby trophies. Unfortunately, this will only matter for real completionists, as collecting the music and trophies from the game does not unlock any extra level benefits. Regardless, at a slightly lower price than the usual AAA release, Kirby and the Rainbow Curse is another excellent release from Nintendo!