The general interest in Splinter Cell Blacklist seemed to be practically zero ahead of its launch. A change of pace in its predecessor, Conviction, as well as a new Sam Fisher and a series of generic trailers meant that release came and went with little fanfare.

There were whispers that Blacklist might actually be quite good, and that those that were intentionally ripping it apart were doing so without playing it, but it was drowned out by the angry shouts of those disappointed by its direction. Hidden in the shadows was a decent stealth game, but it was hidden well.

Want to hate Splinter Cell: Blacklist? Here’s what you do: watch any scene in which the new Sam Fisher talks about his adult daughter. With his boyish good looks and without Michael Ironside’s trademark tone, you may now find it hard to believe that Fisher had time to save the world multiple times and raise a daughter. I know, it sounds like a weak argument, but you have to play it to see what I mean.

Except that people keep calling him Sam Fisher, it might as well have been a different character

And that’s the biggest problem with Blacklist. This isn’t the Sam Fisher we’ve played as for the last decade. He’s younger, he sounds and looks different… Except that people keep calling him Sam Fisher, it might as well have been a different character. Most of the time this isn’t really noteworthy, but then occasionally he’ll mention something that happened in an old game and it’ll break the fiction entirely.

Kojima will get away with it with Snake – Big Boss as a character, as well as Kiefer Sutherland’s own unique voice and acting talents, will win through in the end – but Sam Fisher was all about Michael Ironside, and it doesn’t feel the same with him gone. 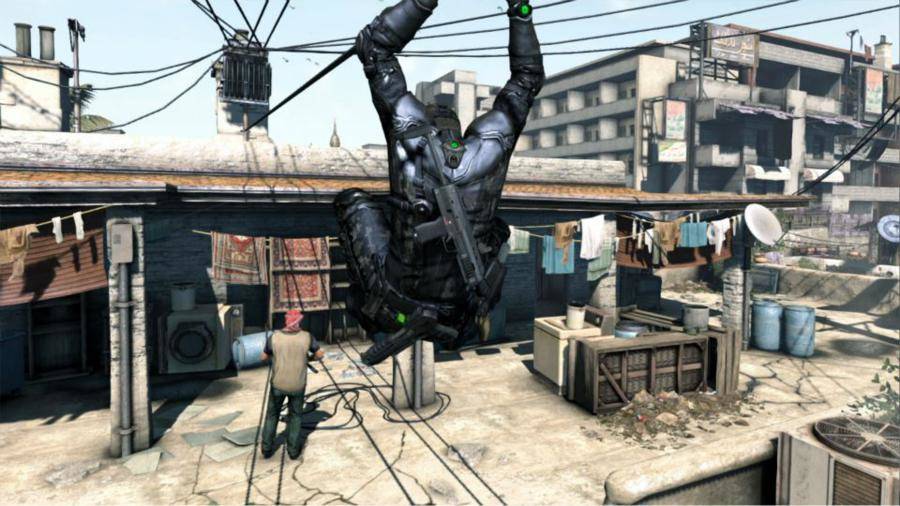 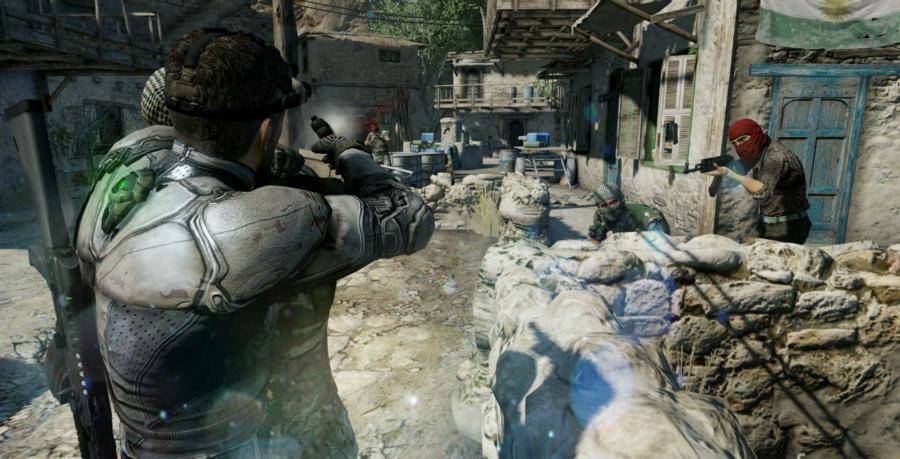 If you’ve ever played a Splinter Cell game in the past, this will be a problem. Not all of the time. Not even most of the time. But enough that it will affect your experience.

What makes the above all the more annoying is that Blacklist, on almost every other level, is very well put together. Purists would scoff at the notion that Ubisoft have taken the series back to its roots – nothing less than a pixel perfect remake would suit some people’s tastes, and if you want the original game and nothing else, I suggest sticking with the HD collection – but they’ve really managed to capture what made the franchise special, and have modernized it along the way.

Controls are mostly perfect, allowing for complete control and excellent stealth. There are odd occasions where you’ll do things you don’t really want to – hanging over little walls can be especially bothersome – but on the whole, you’ll only have yourself to blame when things go wrong.

This is all the more impressive because of the heavy use of the cover mechanic. Cover is the best way to avoid being spotted, but it’s also helpful as a means of scouting an area. Third person action games always, always suffer in the cover department, usually from dragging or visual distance, but I haven’t seen much of it in Blacklist. Perhaps thanks to motion capture, Fisher interacts pretty solidly with the world around him, and this makes it easier to get engrossed in the sneaking mission.

Can You See Me?

And this is most definitely a sneaking mission. While you can choose your playstyle – and are rewarded in different ways, depending on if you run and gun, sneak or mix the two – there’s amply opportunity to slip in and out of the various locations you’ll visit without even bothering the guards. In fact, there are incentives in doing so.

On the hardest difficulty level, I found myself constantly on edge. If you’re seen, you have only a moment to get away before all hell breaks loose, and they’ll come and check your last location either way. The AI isn’t great (there are moments where you’ll swear the guards must enjoy being knocked out), but the design is such that you won’t be able to jog through without consequence.

This adds quite a lot of value to replaying the levels, especially if you’re interested in challenging yourself and really avoiding the action side of things.

As with previous games in the franchise, shadow is your best bet, but the stealth is deeper than that, and you’ll need to plot a path carefully.

Alternatively, you can run in guns blazing. This isn’t nearly as rewarding as sneaking past a mountain of armed guards, but the shooting mechanics are good enough that you won’t dislike it. They’re not perfect (this isn’t meant to be an all-out action game, after all), but if you’re looking at Splinter Cell as an Uncharted substitute, you’re looking in the wrong place.

Blacklist is the best Splinter Cell game in a long time

All of this culminates in a nice enough campaign – the average person will drift during long, terribly specific conversations, but that doesn’t necessarily make the general plot bad – and multiplayer. Multiplayer is excellent, but doesn’t hold enough depth for constant long-term play.

Blacklist is the best Splinter Cell game in a long time, but a few mistakes in the way Ubi marketed it, and the removal of series stalwart Michael Ironside meant everything was against it. If you’re a stealth buff, I highly recommend it, and the multiple ways of approaching enemies mean it’ll be fun for just about anyone.