Farming Simulator is exactly what it says it is. It’s not Harvest Moon, nor is it a chance to mess around an open world with dangerous farming equipment. There aren’t really any objectives, no goals – you just run a farm. Harvesting, planting, cutting grass… this is a farming simulator.

Out on consoles tomorrow, this is a game that, if you feel it sounds dull, definitely isn’t for you. If you’re on the fence, you probably won’t enjoy it. If you love structure and reward, if you like a game that trusts you to make or break a business with little to no help, maybe, just maybe, you’ll enjoy this one more than you think.

Your foray into farming life begins with a very brief tutorial. This isn’t enough. You’re shown how to drive vehicles, how to harvest, plant and make money, and then you’re told to get on with it. There are a lot of information points in the game that’ll teach you things as you travel around, but by that point you’re already expected to be making grown up decisions. 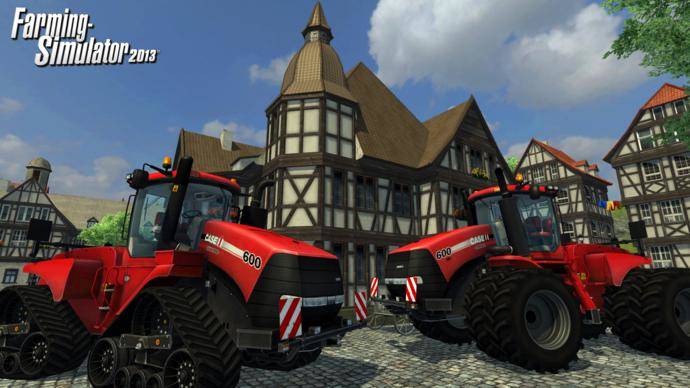 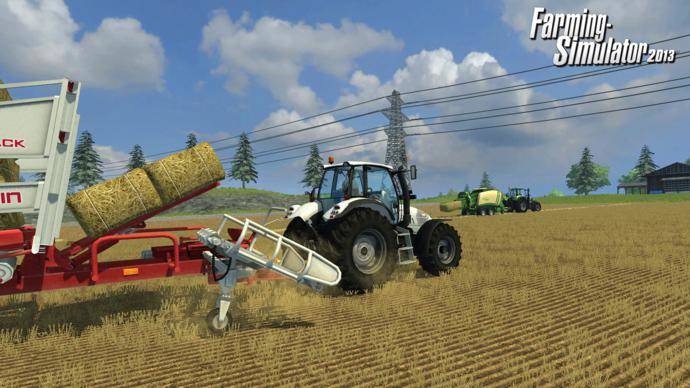 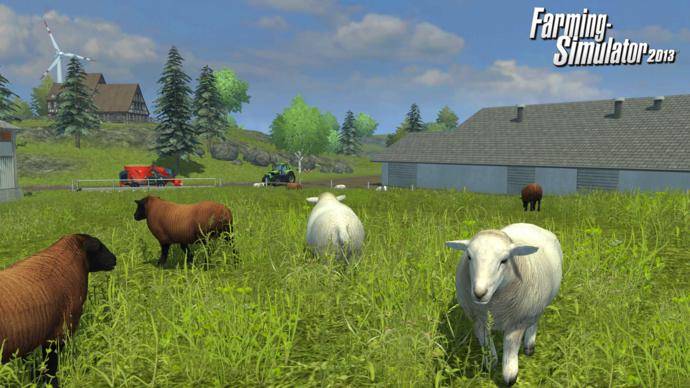 For that reason, the opening of Farming Simulator feels like a bit of a slog. Not only do you have to work on your farm – and there really are times when it feels like nothing but hard work – but you have to learn the ropes as you play. Extra tutorials help, but it’s only with patience and time that you’ll really learn how to look after your farm and make the most from your produce.

After a while, that slog will start to feel less like a trip to the dentist and more like an actual achievement. Yes, you’re still very slowly driving through a patch of nondescript plant life. Yes, you’re still barely hitting 17MPH down an open road. It doesn’t matter though. You’ve kept something running through savvy thinking and time put in.

It's not Harvest Moon, nor is it a chance to mess around an open world with dangerous farming equipment.

There’s not quite an experience out there like it. Even other simulators rarely offer this level of reward, aside from the fact that you’re almost actually doing the thing being simulated. Here you’re thrown in the deep end and, when you learn to swim, you might suddenly notice that you enjoy the depth.

You’re going to spend a long time choking though. Farming Simulator is a title for a very niche audience, an audience that’s probably largely made up of people who are, are going to be or have always secretly dreamt of being farmers. They know a lot of this stuff already, they know brands and they know methods, and if you’re not part of that group, you’re probably going to feel left behind.

Up with the Crows

Each day you’ll get up early and be left to sort out your own schedule. This will take planning and foresight, because although harvesting everything fully grown seems like a good idea, it also means you’ll have very little to do tomorrow. Running a successful farm will require you to learn how to do many different things, but more importantly you’ll need to pick up exactly when you’ll need to do them.

Your own workload will be interrupted occasionally by missions. Missions are issued by the local town – either a German-style country town or an Anywhere, USA kind of place, both of which are quite nicely designed. Missions can be anything from making deliveries to mowing grass, but you need to make sure you have the right equipment. Missions can be a quick source of income, and an excellent way of seeing some of the other things Farming Simulator has to offer.

These missions represent some of the only times you’ll interact with others. You’ll see people walking around, but you can’t do anything with them. In fact, attempting to run them over will result in your victim going through your vehicle and you probably crashing into a wall. If you buy Farmng Simulator as a joke – and if you do, the joke is honestly on you – you’ll probably be very disappointed in how little mayhem you can cause. Your farm will fail, you’ll go bankrupt, but that would have probably happened anyway.

Farming Simulator is an excellent way of experiencing life on a farm, and the licenced vehicles and just-realistic-enough workload will no doubt provide tens of hours of entertainment to the right sort of person. It’s a great simulator, but not a great game.

For everything it does right, Farming Simulator just isn’t very fun. I can’t stress this enough. This isn’t a game you put on after a hard day’s work to burn off some stress. If you want that, stick with Call of Duty. If you just want management, there are better games. This is a title for people who want to jump in a combine harvester and actual harvest stuff.

If you buy Farmng Simulator as a joke, you'll probably be very disappointed in how little mayhem you can cause.

Which is what some people do for a living. They get paid for it, then go home and complain about their job the same as the rest of us.

It’s not fun in the strictest pick-up-and-play sense. That is fine. It’s not meant to be entertaining on that level. But it also means the vast majority of gamers will want to give it a miss.

Graphics are fine for what they are. They’re perhaps a little underwhelming, especially when you’ve got to know an area quite well and start picking up on dull textures, but the lower the developers can get the price on something like this, the better. Glorious HD visuals at 60FPS are not necessary here, and you’ll never be disappointed by what you see on screen.

The audio design, similar to the rest of the game, is very supportive of the simulation and little else. There’s no music as you drive from place to place. Your background score is made up of the low hum of farm machinery instead.

Farming Simulator is about as good as it can be, considering its target audience and location in the market. Aside from making things a little less obscure and perhaps adding a few more objective-based things to focus on, I can’t think of anything to recommend that would actively make it better.

And that’s coming from someone far outside the people who will actually buy this game. They want to be able to just run a farm with as little fuss as possible, and Farming Simulator provides that perfectly. If you love the idea enough, you’ll be able to work through the problems, look past the visuals and you’ll probably have one of the best value gaming experiences of your life.