When Sony opened their doors and welcomed indie games to be sold on their PSN Store, it was like a flash flood. Games like Braid, Limbo, Knytt and many more could now be enjoyed by a much wider audience. Console gamers got a break from their action-packed retail games and got to experience games they normally would never have had the pleasure to try, and developers were enjoying a bigger success riding on the back of the PSN. For the price of a sandwich and a cup of coffee you can now download these smaller games which in all honesty are often better and last longer than full priced retail games.

If someone told me 6 years ago when I brought home my brand new next generation console that I would be using it to play a 2D flash game wherein you control simple square and rectangular shapes, I would’ve laughed in their face. Thomas Was Alone (TWA) takes gaming back to basics yet somehow still manages to feel current and up to date. With 2D four-cornered sprites, simple geometric levels, no detail or fancy aesthetics you’d be forgiven for thinking this game was still in it’s alpha stages of development.

Explaining TWA is actually pretty easy. You play as Thomas, a rectangular shape that can move and jump. With these two very simple actions, you need to progress through each of the 100 levels. As you progress you meet new characters that possess different abilities. By toggling between the characters you can solve the puzzles laid out before you. A total of six new characters join your group and by the end of the game you will be using all of their abilities in unison to solve the puzzles. You’ll use abilities such as being able to jump higher, float in water, double jump and there’s even a character that you use as a trampoline to reach out of reach places. 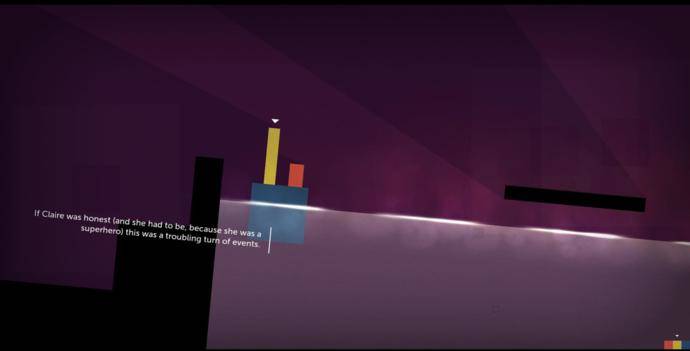 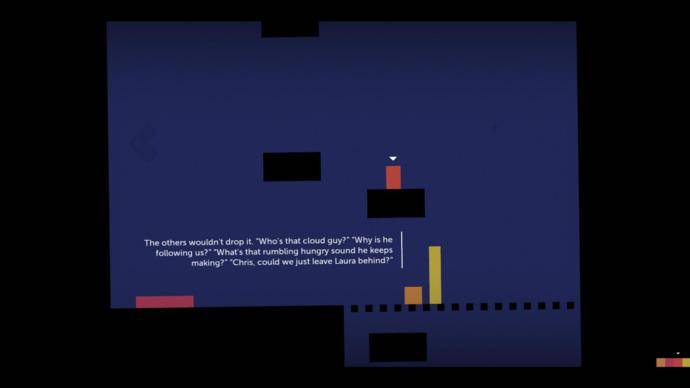 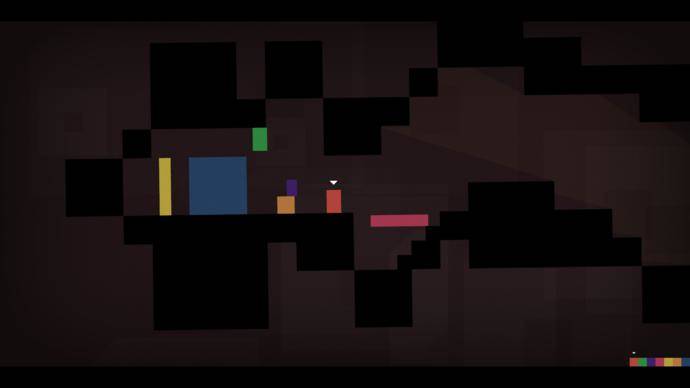 “A game about relationships and jumping” is the tagline for TWA. While this is true – and it’s clear the developer put a lot of effort into making us identify with the characters and give them personality – it just doesn’t work. They’re rectangles. It’s very hard to identify with a plain shape on screen with no recognisable features. It’s hard but not impossible and to some extent I did ‘get it.’ If the story was better paced and the interaction between the characters was more emphasised, I might have gotten sucked into the pretence that these rectangles were actual characters with feelings and thoughts. Unfortunately I didn’t. Giving each of the characters a name did help but ultimately it fell flat for me.On the plus side the narrator that guides you through each level is a joy to listen to. He adds humor to an otherwise monotonous game. With the occasional nod to internet memes and other games such as Portal and Skyrim (arrow to the knee), it’s clear even the developer didn’t take TWA too seriously. Admittedly some of it did feel forced, but nevertheless, it was a very welcome addition.

For those of you who want to hear about the ‘Making Of TWA’ be sure to increase the volume of the Developers Commentary that is found in the pause menu. The biggest downfall to TWA is how easy it is. I beat all 100 levels within two-three hours and never once got stuck. Every level felt very poorly designed in that there was usually only one solution and it was impossible to go wrong or get lost. With checkpoints aplenty, even a failure is no big deal. I would understand having the first 20 or 30 levels being easy to serve as the training ground for the rest of the game and then take off the training wheels once every gameplay mechanic has been explained, but that never happened here. Those training wheels stay on throughout the whole game. Level 100 was almost as easy as Level 1 and as soon as a level started, I knew exactly what needed to be done and that’s simply unacceptable. By level 60 I was starting to get bored with it. When color coded buttons got introduced (meaning only a certain character can press a certain button) I thought ‘finally, this should increase the difficulty and make levels more complex,’ but no, those buttons were only featured in two levels and even then they were really easy to negotiate.

TWA will work for some and fall flat for others. The emotional story and characters did absolutely nothing for me but I’m sure many people out there completely disagree and would find it easy to become attached to these little rectangles. It tries hard to be accepted alongside other PSN games but unless DLC adds a bunch of harder levels, TWA will always remain a quick and easy after thought. As a flash game on your Smart phone I’m sure this’ll be brilliant but as a PS3 game it feels very lacking in content. Don’t get me wrong, the game is good and it’s most definitely unique, but you won’t give it a second thought once the credits roll.