Zombies. Not only a plague on humanity but also a plague on the entertainment industry. They’ve become pretty popular in recent years. Why? Did it start with the addition of the Zombies mode in the COD games or do we have the Resident Evil films to thank for it? No matter the reason, it seems killing mindless zombies is going be around for a while yet.

As someone who has never seen the AMC TV series, nor read any of the comics I was going into TellTale’s take on The Walking Dead blindly. Armed with just my willingness to try something new and with no prior knowledge of the franchise, I was worried I may be left behind. Luckily, the game has no ties to the TV show and only makes a handful of references to the comics. The Walking Dead takes place a couple months before the storyline in the comics so, rest assured, those that enter blindly will largely be placed on the same level as long-term fans. 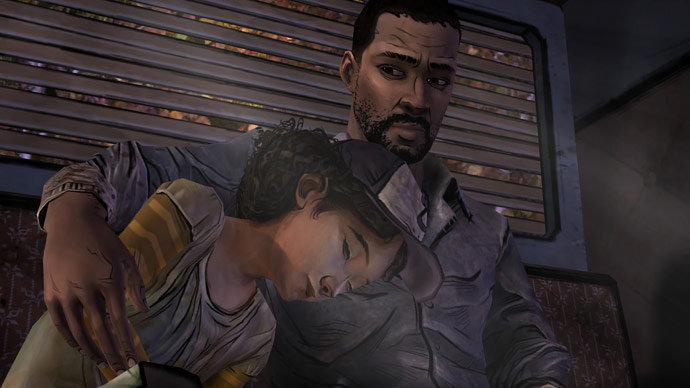 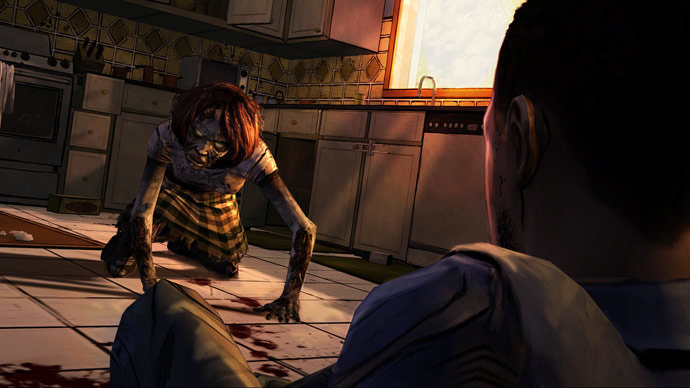 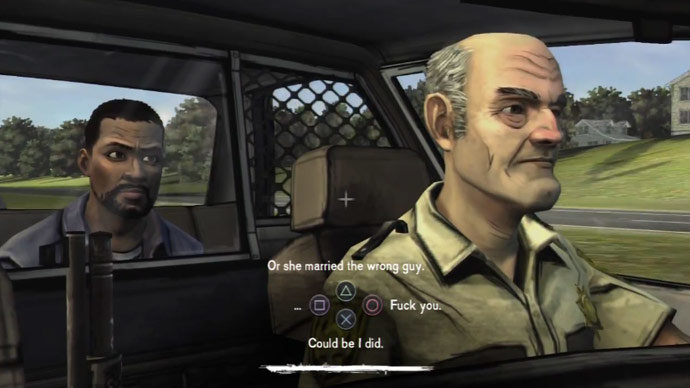 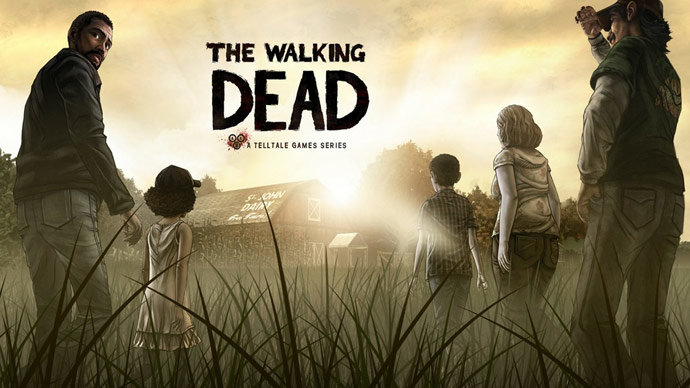 Those of you that have played any of TellTale’ previous games will have some idea of what to expect. The Walking Dead is an episodic point and click adventure game just like their other games however it has one major and significant difference with how the story is structured.

You play as Lee Everett, a thirty-something convicted murderer who, while being transported to prison in a squad car, is in an unfortunate accident which forces him to walk right into a surreal nightmare. Alone and bleeding, Lee clambers to his feet and, after a chilling and terrifying introduction, finds himself climbing over the fence to the back garden of a picturesque and seemingly abandoned home. Here he eventually meets Clementine. A lonely, frightened and clever little eight year old girl trapped in her own home after her parents went away for the weekend and her babysitter turned into a walker. The bond between both characters is extremely pronounced and solid.

Where the story heads next is entirely up to you. In The Walking Dead, you decide how the story progresses. The choices you make throughout the game directly effect not just the ending, but also how other characters treat you throughout your entire five episode adventure. This isn’t limited to good or bad choices, as is the norm. In The Walking Dead there are no good or bad choices, there are simply your choices. Moral dilemmas that have no right or wrong answers. If someone in your group is bitten by a Walker, do you put a bullet in their head before they turn or just treat the wound as best you can and hope they’ll be fine? What if it’s not a stranger, but a loved one, a friend or even a child?

Many choices have timers which put you under pressure to answer quickly. With every action is an equal and opposite reaction of course and you will face consequences to every choice you make. Perhaps that person you shot in the head would later save you, or perhaps that person you chose not to shoot in the head would turn and attack Clem. Not only is this mechanic a great way to really personalise the story but it actually works brilliantly. Play the game your way. Make the choices you would make in real life and be ready for a game that feels like it was tailor-made just for you.

TellTale games are not known for their graphical prowess and TWD is no exception. It’s blatantly obvious from the first frame of gameplay that the studio tried to match the look and feel of The Walking Dead comics. Thankfully, they did a great job of it. While similar to past TellTale games such as Back to the Future, the graphics in TWD feel unique and original. Every character is outlined with thick black lines just like in the comic. Character’s faces are especially exaggerated to help the player identify emotions and facial expressions.

The audio on the other hand works as expected for the most part. Zombies are eerily accurate and the sfx gets the job done. The  brilliance of the audio lies within the voice-over cast. Dave Fennoy (the voice of Lee) does an outstanding job as does Clementine’s voice actess Melissa Hutchison. The supporting cast do an equally fine job at bringing the characters to life.

Each of the five episodes provide you with enough gameplay to pass roughly two to three hours depending on how thorough you are at each location. Bundling all five episodes together should give you ten to fifteen hours of enjoyment. Bare in mind though that that is just one playthrough. With the multiple paths you can take affecting the story, it’s well advised to play through it a second time making different choices just so you get to experience it in a different light.

Technical problems plague The Walking Dead just as much as the zombies do. From freezes to stuttering, it’s all covered. Episode 2 was particularly bad, with almost every scene containing a hiccup in some way, shape or form. Things would sometimes freeze for three to four seconds, giving you a mini-heart attack until the game resumes. Stuttering frame-rate was very common too and even audio being cut off prematurely is a fairly regular occurrence. I had to play with subtitles turned on because sentences were being cut short in the audio. These problems – while not so bad in the grand scheme of things – do eventually have an impact on your enjoyment of the game.  In the back of your mind, you’re always worried your PS3 is going to crash on you.

There’s also a lack of challenging puzzles. This may help keep the story moving along, but even a couple of puzzles here and there would’ve been nice. It’s a slight let down, but, in a game so heavily dependent on the story, I can fully understand why they chose to leave puzzles well alone.

The Walking Dead is a brilliant and thought provoking game. Technical issues aside, it’s probably the best story game of this generation. It has some problems under the hood, but on the surface it’s a well oiled machine, thanks to the staggering amount of story branches a player can go through. Your personality will be put to the test as the moral choices determine the kind of person you are. Not for the squeamish, but not only for fans of the franchise either.