J.J. Abrams’ take on Star Trek, while it has its detractors, has been well received by fans old and new. The next film, Star Trek: Into Darkness, is slated for theatres next month and expectations are high. So, what better way to celebrate this highly anticipated sequel then by playing a game based on the hit films? Well, after spending some time with the latest Star Trek game, I can think of quite a few ways.

The Vulcans are attempting to create a new home planet for themselves by using a dangerous piece of technology. Everything goes wrong when the Gorn, a lizard-like race prone to violence, step in and decide to ruin their plans and attempt to destroy the galaxy. Once again, it’s up to Kirk, Spock and the rest of the Enterprise crew to save the day. 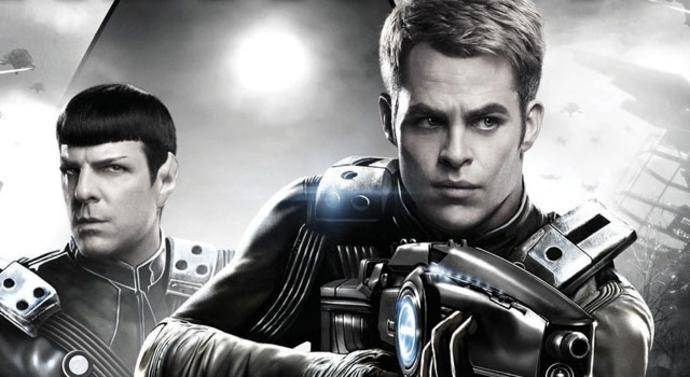 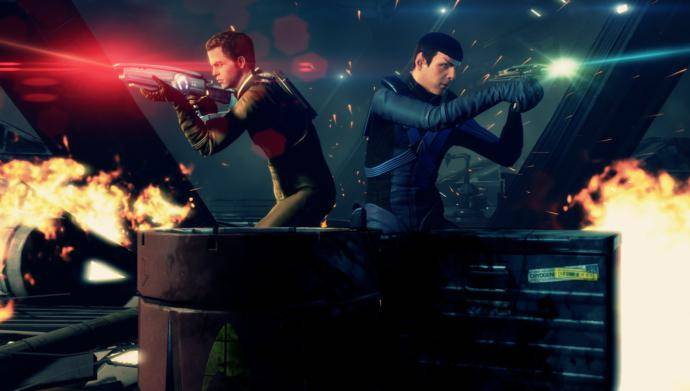 While Abrams’ first foray into the world of Trek contained some tongue-in-cheek references to the original series, it did so in a way that didn’t detract from the solid space adventure storytelling. Shamefully, the game tries to replicate this and completely misses the mark. The dialogue, pacing, plot and jokes are trite and uninteresting. The characters feel more like a self-parody than anything, which causes plenty of cringe-inducing moments during cutscenes. Regardless, while the writing is bad, it has nothing on the gameplay.

Focusing primarily on co-op, Star Trek features Kirk and Spock traversing through an assortment of areas such as space stations, ships and planet environments. The level design is a mish-mash of third-person shooting, stealth, Uncharted-esque climbing puzzles, and obligatory space battles. Normally I would find this varied gameplay refreshing, unfortunately these good concepts just don’t work.

For one, the combat and movement is floaty. Kirk and Spock don’t seem to have any weight to them, and most of the time I felt like they would only respond to my analog stick motions if they felt like it. It’s pretty common to attempt to come out of cover only to have Kirk or Spock decide they’d rather hide a bit longer. Worse, I would try to get them to move to a different cover location only to have them decide to stop crouching and get pelted by blaster fire in the process.

Of course, this atrocious cover system renders the stealth worthless. To make matters worse, moving while crouched is stiff and clunky. The enemy AI is relatively dumb during combat sequences, but in an ironic twist they can spot Kirk or Spock easily when they’re trying to sneak. The worst moment like this is during a mission in which the two heroes have to rescue Bones without being detected. Thankfully this is an optional sub-objective, but as far as I can tell it’s almost impossible to complete due to the botched stealth.

The shoot-outs are a pain, as well. The weapons consist mainly of Federation phasers and guns pilfered from dead enemies. They all have a primary and secondary firing system (“kill” or “stun”, natch), but most of them work the same way. The aiming (either a free-aim or aim-assist) is rather spotty thanks to the camera, but it isn’t dreadful. No, what makes the firefights frustrating is the AI that is either predictable or cheap given the circumstances.

The boss fights fall into the “cheap” category. The first one features a battle with a very large Gorn in a narrow room. The Gorn’s pattern is relatively simple, but attempting to dodge his charge attacks is difficult to do and for the wrong reasons. From what I can gather, there really isn’t a “dodge” button, and the only way I could maneuver around the Gorn when he was running at me was to try and sprint to the other side. Because of the wonky movement, however, I was typically knocked down or (somehow) killed in one hit. Of course, Spock wasn’t able to revive me; his attempts were fruitless thanks to the Gorn’s attacks and the pointless, lengthy “revive” quick-time event (QTE).

Other than reviving your co-op partner, the QTEs in the game aren’t that intrusive. What is, however, is hacking. From doors to turret guns, a mini-game is required to successfully hack a device. Most of them require both Kirk and Spock to work together to line up some radio waves, or something similar, with their Tricorders. Unfortunately, the first few hacks in the game offer little to no explanation as to what needs to happen for success. This element is not only ill-advised, it makes the already dodgy gameplay even more of a slog.

The rest of the game’s mechanics add to the misery. The climbing puzzles are completely forced, the space battles are a confused mess and using the Tricorder to scan rooms, objects and bodies is a nuisance. Other than tracking enemy movements and hacking devices, the Tricorder can scan objects that net Kirk and Spock experience points. Since the points go towards upgrades it’s likely that most players will be using their Tricorder quite often. I found it to be a complete waste of time, however. The upgrades aren’t that beneficial, and any of the “lore” that’s uncovered by scanning items adds nothing to the plot.

This is definitely one of the sloppiest games I’ve played recently. There is a lot of potential here, and playing with a friend helps, but the gameplay is just one missed opportunity after another.

While set in the future, Star Trek looks like it’s from 2006. The characters do look like their real-life counterparts, only made of mushy dough as opposed to flesh. Most of them appear to be staring off into the middle-distance, and the lack of realistic body and face animations make all of their interactions awkward. There are plenty of morphing issues with people walking through one another, and the clumsy AI at times will have Spock or one of the secondary characters staring at wall while in conversation or in the middle of combat.

The set-pieces are no better, sadly. Most of them are relatively bland and devoid of detail. This makes the exploration (what little there is) even less enjoyable. Granted, some of the explosions and space battle sequences look well enough, but even then there’s a lot to be desired.

On the audio end, other than the dull sound effects, the voice-acting and soundtrack aren’t too bad. The full cast from the films is all present, and they do a decent enough job recreating their on-screen personas. The orchestrated musical score is also fine and, for the most part, works with the setting.

Fortunately, the writers were smart enough to make Star Trek’s story have nothing to do with Into Darkness. It is canon, and it does take place between the first two films, but nothing will be lost if it isn’t played. Truly, this one of the only good things that I can say about this game. Underneath all of the messiness lies something that could have been worthwhile, but as it stands I expect Star Trek to find itself in the bargain-bin in the very near future.