Killer is Dead is a hard game to pin down. You play as an executioner for a government agency that hunts out murderers for the general public. It plays a little like something from Platinum, a third-person action game with an anime flair. That flair runs deeper than just the visual style though, and a unique fantastical twist makes it all the more unusual. Expect blood, whimsy, sex, adventure and intrigue.

The first thing you’ll notice about Killer is Dead is just how stylized it is. There’s definitely an anime influence there, and it works very well. The voice acting is over the top and the script only takes it higher. There are lines that, out of context, would be completely cringe-worthy, but they’re often pulled off here (not always, but often). It’s a heavily narrative-driven game, so if you’re the sort of person that can’t stomach girly giggles and over-reaction, it’s best to move along.

So narrative-driven is it that for much of the game you’ll spend more time watching than playing. The first two missions will probably take less than two minutes to complete, far less if you know what you’re doing, and yet it’ll take almost twenty to see them through. This would be better if the plot was given more focus, but it’s not. Of the thirteen main missions, quite a few have nothing to do with the story proper, and do little to add depth to established characters.

And, likeable as they are, the main ensemble don’t manage to carry the on-again-off-again story. They’re just not interesting enough. I found myself more fascinated by what could possibly come next than I did any actual attempts at plot or character.

Killer is Dead is weird. There’s a lot of anime that tries to do things differently, that takes influences from the likes of Alice’s Adventures in Wonderland and takes them to the absolute next level. It’s nonsense, but darker, more dangerous. This is a game where a young girl morphs into a spider monster, where a young musicians loses her ears and in which you will walk on the moon. 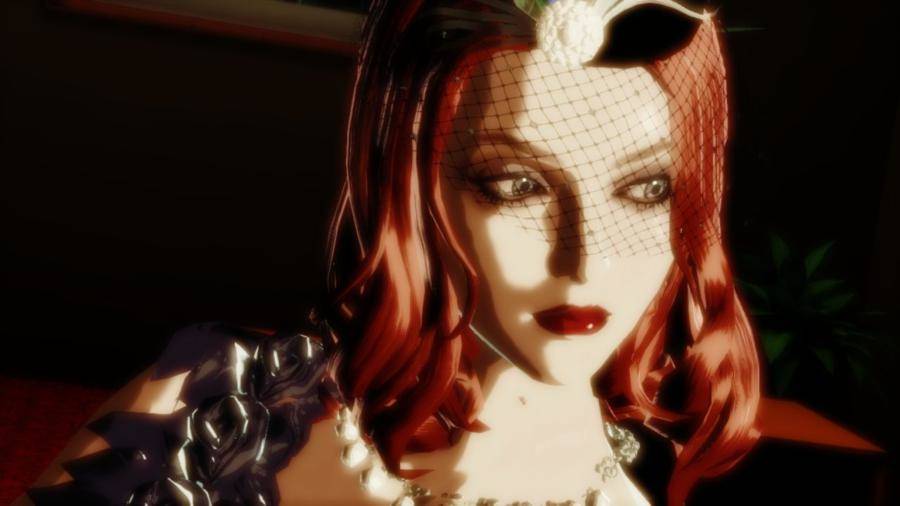 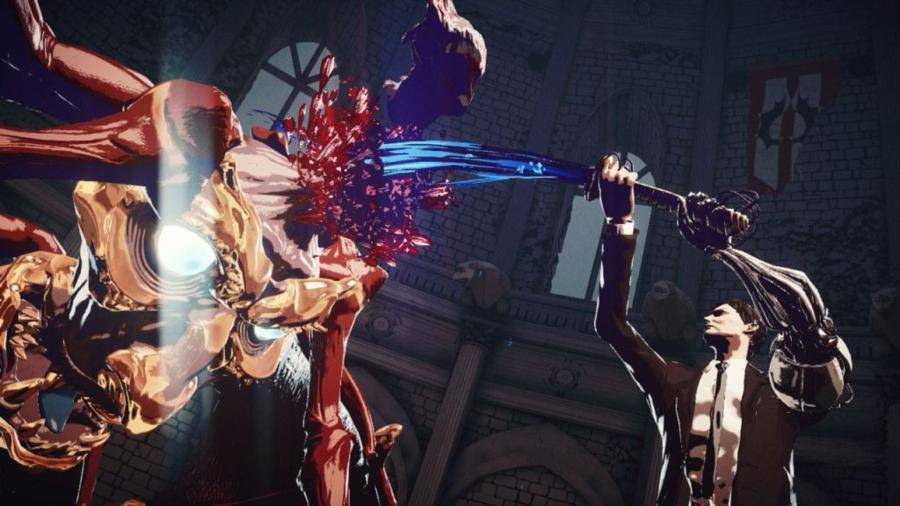 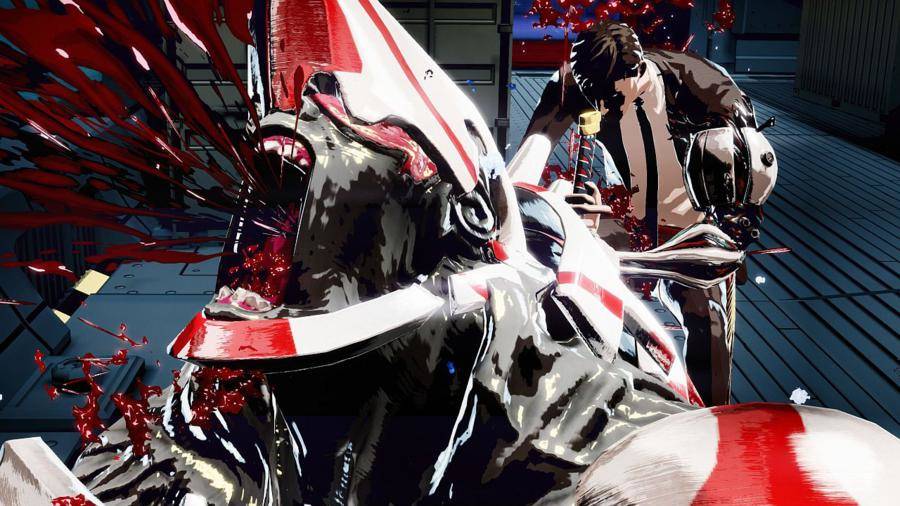 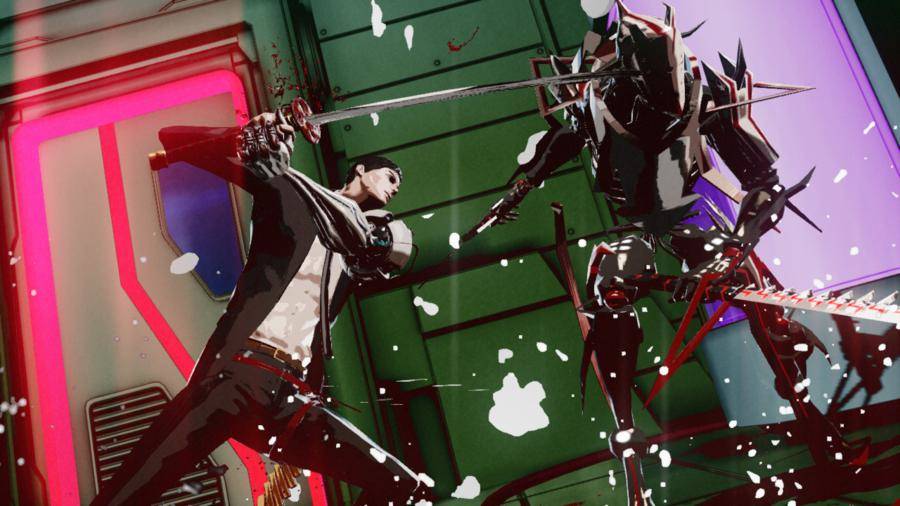 It can be a little hard to follow at times, although the story itself is quite simple. Events aren’t always chronological, and things you should remember from the beginning down always sink in well enough for you to understand what’s happening at the end. This adds another layer to the confusion, to this fish-out-of-water feeling which leads me to think that perhaps the “faults” of the story is intentional. Fans of Suda 51 probably won’t stray too far from familiar territory – unsuspecting purchases are less likely to be instantly enamoured.

As you progress, the levels get longer and you’ll be expected to do more and more. There’s quite a sharp increase in difficulty around the fourth or fifth chapter, although, to be fair, it couldn’t get any easier. There’s a distinct moment where the kid gloves come off, and nothing’s ever the same again.

There's nothing wrong with wanting to see a pretty girl, but it's not exactly gameplay in and of itself

The gameplay in Killer is Dead is simple enough. Enemies will attack you, and you’ll beat them up until they die. Enemies will generally come in waves and, as you clear a room, you’ll be able to progress. Fighting isn’t too tough – there’s a standard hit move, a block and a ranged attack – but there’s a few things that are done differently that are enough to make this game stand out.

Firstly, the higher your combo, the faster you attack. This isn’t unusual – there are dozens of third person beat ’em ups that offer advantages to higher combos – but the way it’s pulled off really makes avoiding hits more important. You’ll do this by dodging and blocking attacks, and hitting when you can.

This is special in itself. Dodging successfully allows you to unleash a special attack, and maintaining your combo will also allow you to extract a specific item type from the regular enemies. This means you can level more specifically, if you’re a talented fighter, and adds an interest skill-based levelling system.

The skill is by no means necessary, as you’ll gain regular experience as well. This unlocks new moves and abilities, although it’s faster if you can make it to those special moves.

At the end of each chapter is a main boss. These range from mildly difficult to incredibly frustrating. It takes a little time to get used to the attacks of each, although it’s natural enough that they feel fair. You’ll probably still die a few times, especially on your first playthrough, and so it’s handy that you can purchase lives between missions.

Again, this is done with exaggerated flair. Your assistant drops from the sky to pound you on the chest until you come back to life. It’s cute, if that’s your thing.

Killer is Dead is rather short, especially if you play it well on the lower difficult levels. There’s quite a lot of reasons to return, both good and bad.

Firstly, there are a number of side missions in which you try to woo women. You’ll do this by staring at them, at their thighs and chest mainly, until you build up the courage to hand over a gift. Depending on how good the gift is, the girl will fall for you that much more, and eventually will give herself up to you (and a new weapon as well).

These are about as awkward as they sound. There’s nothing especially sexy about these mini-games (although there is an item that allows you to see them in their underwear), and they’re not very fun. There’s nothing wrong with wanting to see a pretty girl, but it’s not exactly gameplay in and of itself.

There are also challenges and collectables to complete, and multiple levels of difficulty to experience. To get the platinum, you’ll need to play on multiple difficulties, and get AAA mission rankings. If you enjoy the gameplay, you’ll be able to get over twenty hours of fun, and that’s not a bad deal considering how quickly Killer is Dead has dropped in price.

Killer is Dead is a weird and wonderful experience that won’t be to everybody’s tastes. It could have been better had they tried to stretch a little more, they could have even kept the art style and sexualisation. Instead, it ends up rather underwhelming, even weirdness for weirdness’ sake. Still, it’s worth a look if you fancy something very, very different.