The Final Fantasy XIII franchise has managed to completely split the Final Fantasy fandom down the middle, becoming a punchline for a certain sort of online persona. In the echo chamber, those that are angry shout the loudest, and they only hear their own voices jump back. That’s a shame, because Lightning Returns shows that things can get better, and that new ideas sometimes pay off. It was never going to be the best Final Fantasy game ever – but it CAN be a decent time filler.

The biggest twist of the game – Lightning Returns, and she returns hard. Whilst Final Fantasy XIII-2 managed to improve upon the design of Final Fantasy XIII in several areas, Serah as the main character was a somewhat underwhelming decision. Lightning might not be the most popular character in the Final Fantasy multiverse, but at least there’s a degree of familiarity. It feels like reuniting with an old friend.

It was never going to get great reviews, nor was it going to impress the naysayers. Despite all that, Lightning Returns is a nice Final Fantasy spin-off title

This time around she’s taking up the role of Saviour, helping God move souls from an old world to another. You’ll do this by completing dozens of quests, large and small, but there’s a catch: you only have a certain amount of time to do it.

Before we get too far into the gameplay, a quick word on the plot: it’s far-fetched and it’s a little out of nowhere. There are even moments where it manages to be preachy, a fact that’s more impressive when you realize Lightning Returns boasts a completely made-for-universe higher power. It’s not even THE God that everybody raves about, and it’s still preachy.

I do get the feeling that there’s a certain sort of person – the sort that spends time on Reddit, browsing /r/atheism without bashing their head against their desk – that just couldn’t stomach Lightning Returns. With a quiet sigh, perhaps an eye roll, they’d wonder how Square Enix could be so stupid as to do a “crap” plot involving religion so heavily.

It’s a nice idea that’s not quite explored enough, instead making space for poorly-scripted fan service. Let me just clarify that: the scenes themselves are great to watch, and there are twists and turns that’ll make you happy you stuck with it for three games and 90+ hours, but, really, the script is horrible. I’m not sure if it’s a Dilly Dally Shilly Shally translation thing or if they had the work experience kids polish up the final vocal pages, but, really, don’t pay too much attention to what’s being said. Rather, enjoy the general feel of it all.

Time on our Hands

As far as Final Fantasy titles go, Lightning Returns is completely out there. Set in an semi-open world, with quests that you can pick and choose as you go, it could be Mass Effect if not for the pink hair and Chocobo girls.

Don’t get the wrong idea, it’s not nearly as open as Mass Effect, nor are the exploration or choice options nearly as refined. The only real choice is how much effort you put in, how many people you try to save. You can try to do it all, or to do none of it. If you do none of it, Lightning Returns will be a short game, in which very little happens. With a little effort and skill, you’ll get a lot of reward. It’s interesting that, as part of their flagship narrative franchise, they’ve allowed the player so much power over their own story.

That doesn’t mean it’s all good. There are things in Lightning Returns that were never supposed to happen – running races and stealth missions spring to mind – and they work about as well as you’d expect. The engine just can’t properly handle them, and it ends up being laughably bad. Both side missions and main missions have moments that’ll just make you shake your head. “Why are they making me do this?” you’ll ask, as you fail for the umpteenth time.

And that’s a big problem. With each second that passes, the world of Lightning Returns is getting closer to destruction. Failing, retrying, costs time. With each second squandered, another soul becomes less likely to be saved. This adds another interesting, unique mechanic to Lightning Returns – you must manage your time exceedingly well. How far are you willing to go to save a stranger, and at what point to do you give up?

Everything, from fighting enemies to taking on side quests will have you questioning how much time is left. Can you really afford to lose against that big monster, or should you try and improve yourself before taking it on? Is it worth it at all? 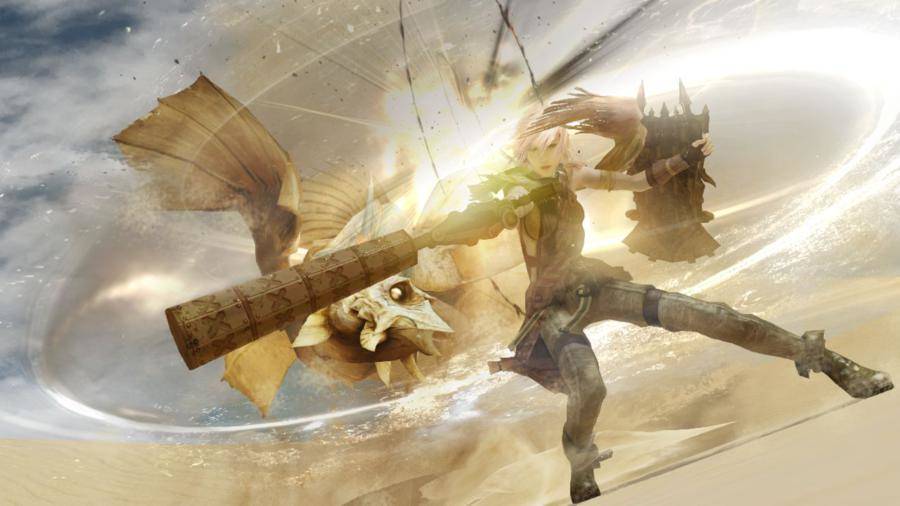 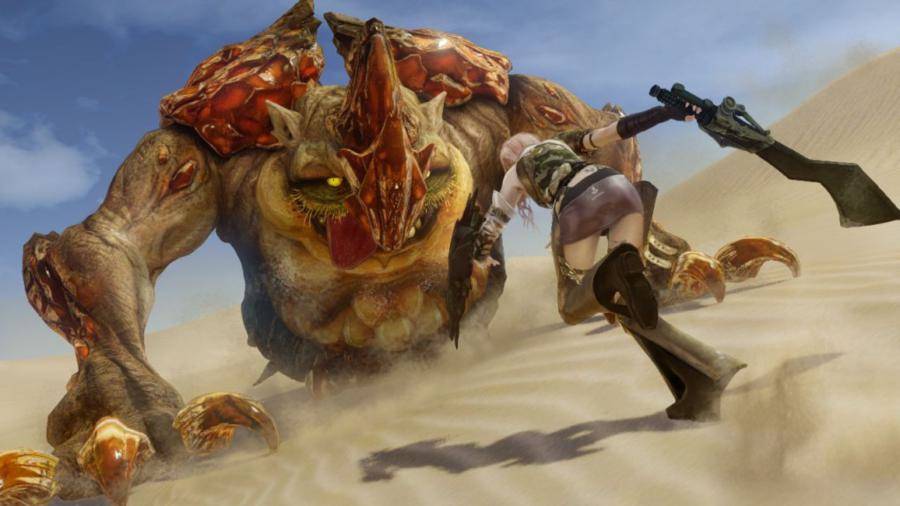 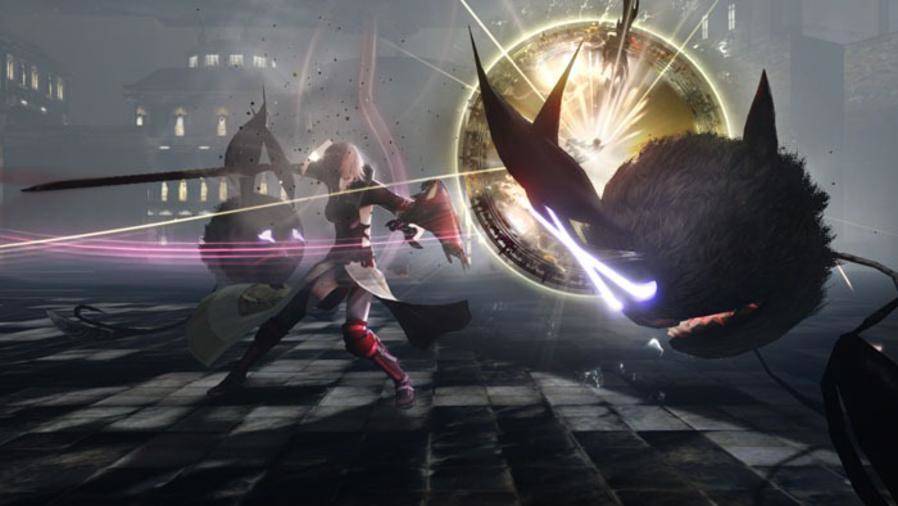 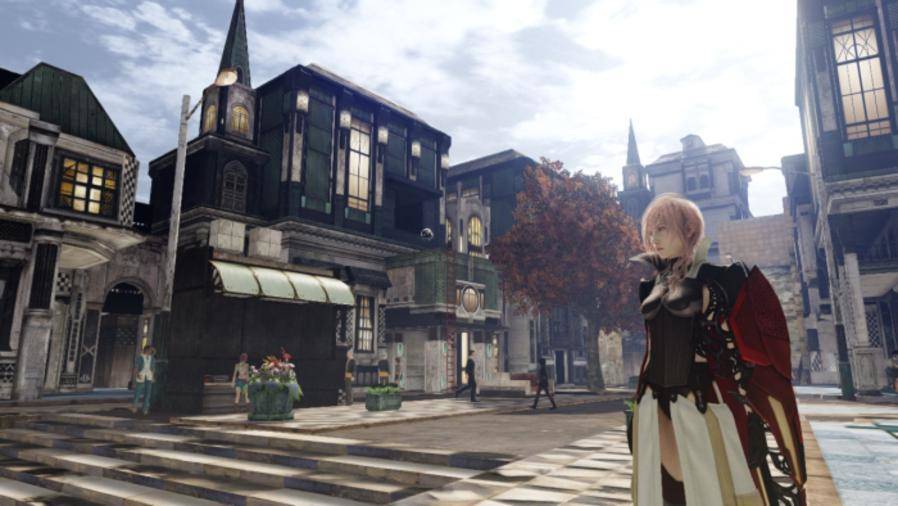 If side quests just sound like a meaningless way of extending the game, hold on a second. They’re built into the very fabric of the narrative. If you don’t save souls, there’ll be less time until the end of the world, and Lightning will be less powerful. Unlike other RPGs, Lightning’s skills are massively improved by the amount of people she’s helped.

This is great, because there are times in this game you’ll need all the help you can get.

You might have heard that Lightning Returns has a real-time battle system, and that’s somewhat true. It’s not Kingdom Hearts, and there’s still a loading screen between meeting the enemy and actually fighting it. In that regard, it’s obvious that this is a system tacked onto an old system – this is the Final Fantasy XIII battle system, with extras.

Those extras are pretty damn impressive though.

Like with previous entries in the XIII series, you’ll need to stagger your opponent to do real damage. The real-time battle system allows for new ways of doing this, fighting quickly or blocking attacks when necessary. This means there’s a tactical edge to your combat, and one that takes more than just picking the right option in a menu. Purists will hate it, but the more open-minded amongst us will see you’ll need control of both your hand and mind to fully utilize the new battle system.

The problem there is that there can be huge difficulty spikes that slow things down somewhat. For that reason, if you want to avoid frustration, begin on easy to start with. I played on normal, and there were times I wanted to scream. The block isn’t quite accurate enough, and there isn’t always enough information about how close an opponent is to being staggered, and what is working. For that reason, prepare yourself for a mini-breakdown while playing.

Despite all that though, this is definitely an improvement over previous games. Fun, more than passable, different – something that in any other game would be celebrated. It’s not Final Fantasy – or rather, it’s Final Fantasy hacked into something it wasn’t – but it’s good.

A few years ago, Square Enix explained that Final Fantasy XIII couldn’t possibly have cities, because it’d take too long. No shops or NPCs to interact with, just endless glaciers. Beautiful, but repetitive, and one of the main reasons people got wound up with the original game.

Lightning Returns has plenty of city to explore, and more besides. It all looks great. Those of us with our fancy new-gen machines might be underwhelmed by the anti-aliasing, and sometimes character models can repeat a little too often, but for the most part things look good. I’m still impressed with how good people look, even though Final Fantasy XIII came out four years ago. Square hit their PlayStation 3 stride running, and it’s only got better.

This is let down occasionally by shaky animations or frame rate drops – they’re not too bad, they’re not often and they’re definitely not game breaking.

It was never going to get great reviews, nor was it going to impress the naysayers. Despite all that, Lightning Returns is a nice Final Fantasy spin-off title, and those that want to see how the series concludes will be in no way disappointed. Buy it, if you want it, or wait till it gets cheaper if you’re not sure. It’s not as bad as you’ve probably heard and, yes, it might even be good.