Battlefield is a franchise known for its more serious take on war and for its emphasis on teamwork and strategy. It got a following – and rightly so – for its large maps, it’s vehicles and its excellent community. Battlefield 3 is the first main entry in the series since Battlefield 2 was released in 2005 and is the first specifically for HD consoles. With top notch graphics and impressive animation, have DICE squeezed as much as they’re going to get out of the PlayStation 3?

If you take everything you’ve ever seen in any fiction pertaining to warfare and place it into a linear story, you have Battlefield 3. After spending years working on a fantastic multiplayer, I can’t help but think someone at DICE suddenly remembered there needed to be a single player mode a few weeks before the game went gold, and just copied a list of archetypes and put them in a game. If you think my writing that the single player portion of Battlefield 3 is a cookie-cutter attempt at letting the player be a big strong army man is generic and overused, you have but a fraction of how it feels to actually play through the cookie-cutter attempt at a game.

The story begins with Sgt. Blackburn in Iraq, trying to discover the location of a missing squad of soldiers. The plot then meanders through various locations that allow for impressive vistas and big action set pieces, introduces characters with hard to pronounce names and foreign sounding accents whilst dealing with an underhanded Russian plot to blow up the world. If this story hadn’t been told in Battlefield, it’d probably be called something like “America: We Kick Ass.” 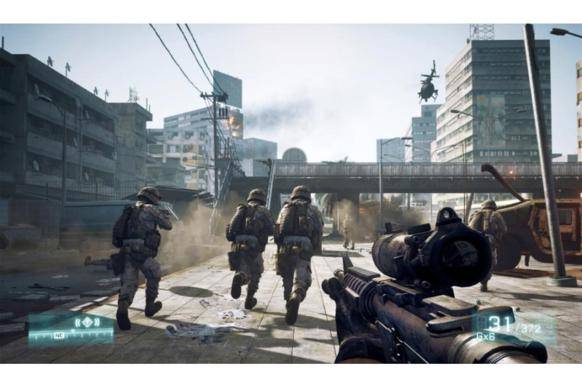 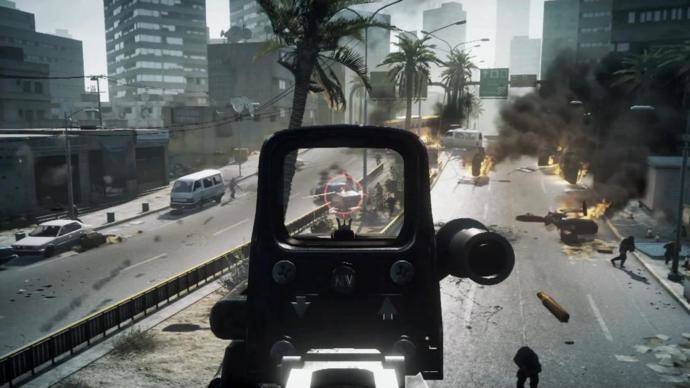 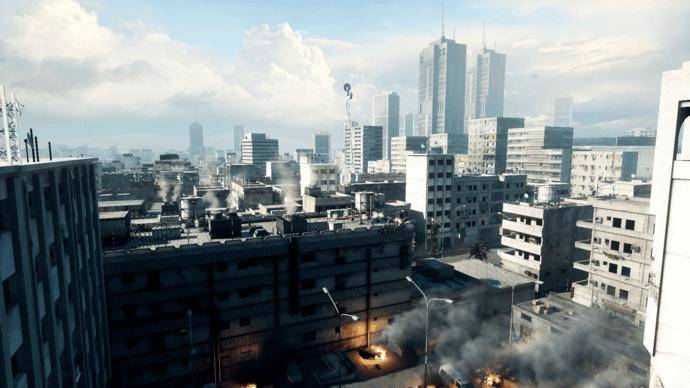 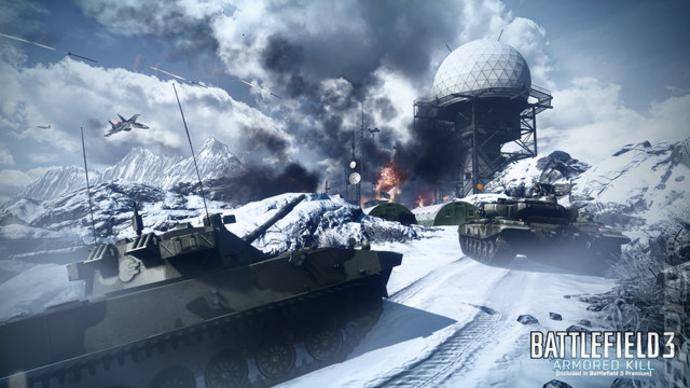 Flash scenes show off the graphical prowess of the game and semi-scripted events, canned adrenaline, make up far too much of your play time. Occasional quick time events break up the adventure, but this is mostly another way of having a ton of action without the player getting in the way. If you can get over the generic story, it’s actually perfectly playable in a Modern Warfare sort of way. The plot, if you cut away at the top layers, deals more with the frailty of war than its cousin, Call of Duty, but lacks the twists and turns of the Black Ops series and has even less of the humanity of the new Medal of Honor or Bad Company.

It’s not as bad as some people might want you to think, but their complaints definitely stand. Battlefield 3 rarely strays from the “FPS: Single Player” handbook and the average person might feel like skipping it all together.

Battlefield 3’s co-op is dangerously overlooked by its bigger brother. It adds life to some elements of the single player while scaling down the multiplayer to a more manageable team basis. The action set-pieces remain, but a reliance on teamwork (with an actual human, no less!) makes all the difference. It beats out the poor Spec Ops showing in the more recent Modern Warfare games anyway, although there should definitely have been a little more choice in levels.

It’s fantastic until it ends, at which point you’ll probably wish the single player had been a little better and playable with a friend.

If you bought Battlefield 3, there’s a good chance you bought it for the multiplayer. Although the PS3 version lacks some of the features of the PC version – maps are smaller and there are far fewer enemies to compete against – it’s still a pretty fantastic effort and condensing the experience to home consoles. Although there are quite a few game modes to choose from , you’re most likely to end up playing Rush. The mode Battlefield is best known for, Rush has one team charging an objective while the other team attacks it. It’s addictive, tactical and fun.

Within a few games, you’ll agree there’s nothing quite like Battlefield 3 on consoles. The animations are more realistic, the gameplay more reliant on teamwork and more based upon objectives than any other game on the market. The length of the maps, and of each individual game, make you more invested in the overall battle and the importance of your kill/death ratio is massively diminished by having different classes.

In fact, the way that classes work in Battlefield 3 fantastic. You’re rewarded for playing your part, so a medic who heals a lot can fight to the top of the leaderboards with little to no trouble. You don’t have to be a quick-fingered powerhouse to be a valuable asset and there really aren’t enough games that consider that important in this day and age. The more you play a certain class, the more weapons and equipment you will unlock for that class. You’ll play for maybe even hundreds of hours before you have access to everything and have mastered each style of play.

Actual communication, like in many games on the PS3, is pretty rare, but teamwork still exists. The rewards for topping up ammo or reviving a fallen comrade mean you’re never too far from a fallen comrade and fighting alongside your team never fails to feel epic. This is aided by the squad system, which allows you to spawn on some of your allies. Never before has a developer been more aware of the importance of keeping their players together and that was a definite focus for the multiplayer team. It’s actually always quite surprising to see a game where the whole of the winning side didn’t play to the best of their ability, and it’s always a really nice feeling.

There are issues though, mostly for people who have played previous games in the series. Battlefield is known for a couple of things: vehicles and, more recently, destructible environments. In the console version of Battlefield 3, these have both basically been forgotten. Aeroplanes and helicopters appear on only a few select levels and transport generally seems to be a means of getting from A to B, as opposed to the game breaker it was in Bad Company 2. Keeping with Bad Company 2 for a second, there was a desperate need to keep moving. You didn’t know when a wall would disappear or a building collapse on you. This isn’t an issue in Battlefield 3 – destructible environments feel phoned in, perhaps due to hardware limitations. Either way, I hope Battlefield 4 manages to implement them in a better way.

Equally annoying, a recent patch and a change in the way servers are run mean that it’s impossible to get a short game of Battlefield. That’s only really annoying if you absolutely have to see the beginning and end of a game, but it can sometimes feel as if you’re fighting for nothing.

Battlefield 3 is pretty amazing looking on PS3, but not perfect. While DICE have managed to impress, visually, the tell-tale slowdown and screentear scream for better hardware. Still, they’ve done a nice job optimizing it and the smooth animation and lighting isn’t lost on anybody. Nobody could say it’s unattractive, although others might ask why Sony have let their console offerings drop so far behind what’s capable on PC.

The sound of war is never something that’s easy to emulate in a game. It needs to be both realistic – but not too realistic – and recognisably war-like, and you end up with something halfway between a Hollywood blockbuster and a TA meeting. Battlefield 3’s guns sound like guns, the vehicles sound suitably accurate and the soldiers are salty enough that their screaming obscenities are pretty much in sync with how often I got myself killed.

As a multiplayer game, Battlefield 3 can hardly be faulted. The issues that there are are easily ignored by the bigger picture. Some will want something that takes less effort, something more pick-up-and-play, but those people are missing out on great depth and an almost endless replayability. If you view it as a full package, it’s still the multiplayer that shines the most. There are massive issues with the single player, but it’s still worth a look if you ever feel in the mood for graphics and good times. Ultimately, you’re paying for the multiplayer anyway, and that alone is worth the asking price.