Nintendo’s Super Smash Bros. series is one that needs no introduction. If you and your friends have ever wanted to take those household names from Nintendo’s beloved franchises and have them throw down (If? Ha!), then that was the series you went to. Well, now Sony has thrown their hat into the mix with its own multi-franchise showdown, PlayStation All Stars Battle Royale. Now you can pit Sony’s successful franchise front-runners against each other such as Jak and Daxter, Kratos from God of War, Sly Cooper, Cole McGrath from Infamous, Ratchet and Clank, and a few others. With all these characters and the classic Smash Bros. formula, PlayStation All Stars produces an enjoyable alternative to Nintendo’s successful series, but the fun doesn’t last as long as one would hope if you’re taking on the game alone.

Much like its Nintendo predecessor, PlayStation All Stars Battle Royale is at its peak in the multiplayer modes. Both local and online, the solid controls and nicely implemented stages and character designs make for a fun time. Depositing a few hours with friends into Sony’s character battle royal is as easy as breathing when you take control of Jak and start shooting up the place against Nathan Drake, or use Kratos to exact some vengeance on Sweet Tooth and his psychotic tendencies.

The overall gameplay is much like Super Smash Bros., as you might expect. Sony and SuperBot Entertainment have done little (nothing) to hide this. Well enough, the similarity in controls and gameplay between the two games works and makes it that much more playable. After all, there is a reason the formula works. Attacks, both basic and combos, work nearly the same as Nintendo’s brawler, but work well with the unique character animations. Because of this, most of PlayStation All Stars’ characters are a breeze to control and can be picked up and put to causing destruction right away. Kratos, Dante, and Cole are just a few of these easy fighters that players can just pick up immediately. However, others like Jak and Daxter and the Big Daddy control a bit for stiffly, needing to truly be mastered in order to utilize them effectively. Beginners may be frustrated by these more difficult characters, but getting the hang of them is very rewarding. 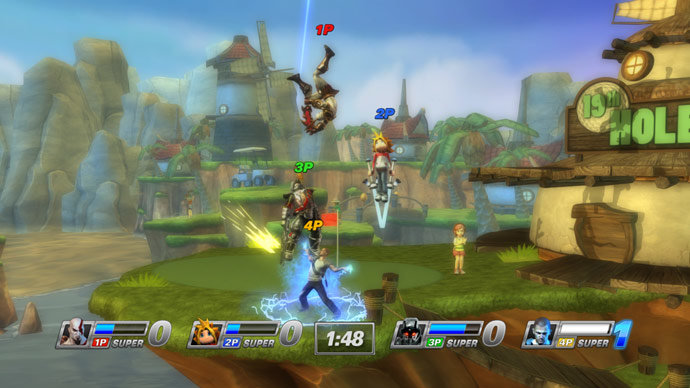 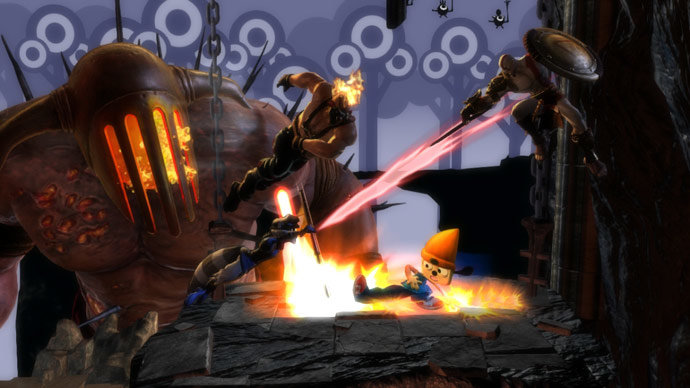 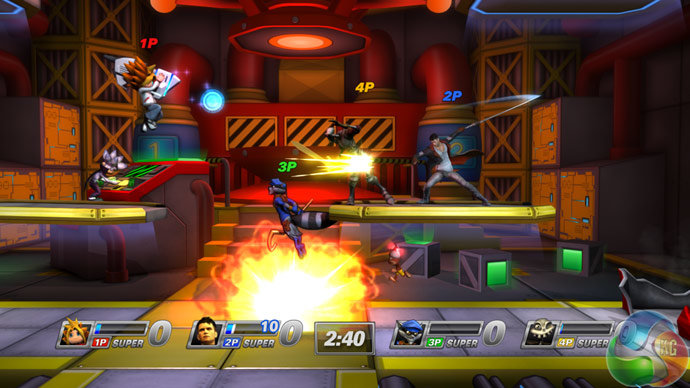 PlayStation All Stars is not without its differences, though. Throws are performed with the right analogue stick making them much simpler to pull off and surprisingly effective. You also have a “super attack” instead of the smash attack. Each character has three, each more powerful and destructive. Victory is attained by using your super attack on your opponents, which gives you points and causes them to lose a point. The most points at the end equal a win. Waiting out and simply surviving isn’t enough.

The modes and variety given are where Sony and SuperBot really dropped the ball. Solo modes consist of an arcade mode, a challenge mode with…well, challenges, and a practice mode. As far as these choices go there aren’t a lot of options nor a lot of variety in how you play them. The arcade mode is lackluster with its uninspired execution, and calling them challenges in challenge mode would be quite a stretch. As mentioned, the multiplayer is where the game really picks up. The matchmaking is easy to utilize and effective. Once you get started playing with others, the fun can go on for hours, unlike the single player.

PlayStation All Stars Battle Royale looks good in most of the right places, but lacks in others. The Arcade Mode, while giving each character a unique story, the only animated cut-scenes are before you battle your rival character and right before the final boss. Fully animated cut-scenes, especially with a game that brings together so many iconic characters, would have been much appreciated.

Aside from that, the character models and animations are great. Each character looks perfectly replicated from their game or franchise and their animations make each move unique and fun to watch and perform.

PlayStation All Stars stages are also very well done. A mixture of two different locals, each stage does well at re-imagining both games and also combining them to make something unique both in look and feel. Ratchet and Clank’s Metropolis is attacked by the Hydras from God of War and need to be avoided and Hot Shots golfers pelt you with golf balls at Jak and Daxter’s Sandover Village. The combination brings several unique obstacles and scenery to players. Some could have had a bit more, such as Parappa’s Master’s dojo, but most offer a good challenge.

Each stage also has great sound design that complements the game or franchise that it came from. The characters and combat are the same. Each characters sounds in battle feels like they just walked out of their original game, but doesn’t clash with the rest of the characters’ and stages’ sound effects. I felt like I had jumped right back into Jak II when I pitted Jak against Fat Princess and started blasting her away with several different guns…until the hydras attacked.

With the roster to utilize it, it was only a matter of when Sony stepped up and pitted their characters against each other in a knockdown, drag out throw down. Like most fighting games, PlayStation All Stars Battle Royale shines brighter in its multiplayer, both online and with local friends. Sadly the game doesn’t shine in the single player, it burns pretty dim. A shallow arcade and challenge mode and a lack of variety hurt PlayStation All Stars in the realm of solo play. A fleshed out and fully animated story mode and some harder and more challenging challenges would have given some lasting appeal to the title. Unfortunately, PlayStation All Stars won’t hold single players for long. If you plan to have some friends over or connect online to see if Kratos or Nathan Drake is the bigger bad-ass, then you’ll have some fun. Going it alone, however, will just show you that there isn’t a whole lot of content past the surface.