Mario has long enjoyed a wide variety of spin-offs. Best known is Mario Kart, although the little plumber that could has never been completely tied to to the racetrack. This tradition of allowing an untrained fat man to star in various sporting events continues with Mario Tennis Open for the 3DS. If you want to play this game but are not too familiar with the sport yet, then you can visit IPTL World to find out everything you need to know about tennis. Who knows – this might even help you be an excellent player on and off the court!

As with previous sporting sequels, there have been a number of changes, but the core gameplay remains true to what fans expect.

A Nice Day for Tennis

That’s because this really isn’t a traditional Tennis game. Sure, you have two people hitting a ball at one another at extreme speeds across a net, and of course you’re scored for when you manage to get it past your opponent, but while this is a title that at first glance seems to be about Tennis, it’s in fact about magic powers.

So game changing are these “magic powers” that basically every component of the game is affected by them. You won’t win a match unless you use them, and use them a lot. Even the difficulty, as opposed to increasing the skill of your opponents, instead decides to just give you less of the power-ups to use.

These powers appear on the floor as you’re running around. If you can get to that place and hit the right button at the right time, then the ball will be returned to your opponent with some sort of advantage.

Perhaps it’ll go faster, perhaps it will bend in mid-air, or perhaps it will throw the opponent back as he hits the ball. All of these will either open up opportunities to gain a point or will just give you the point almost by default. 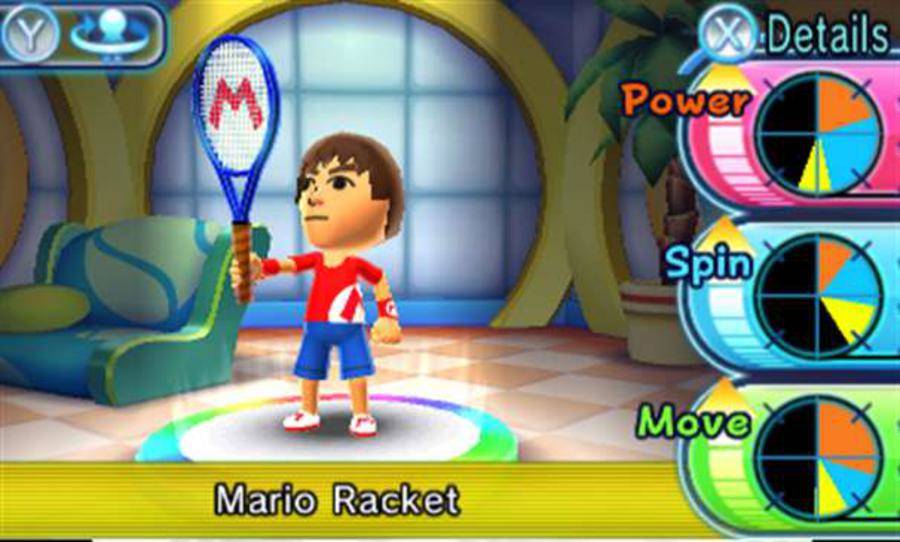 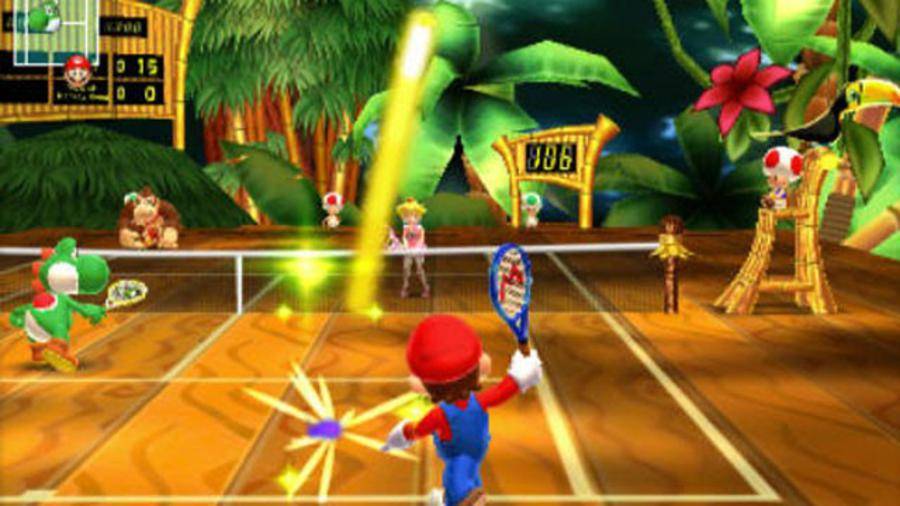 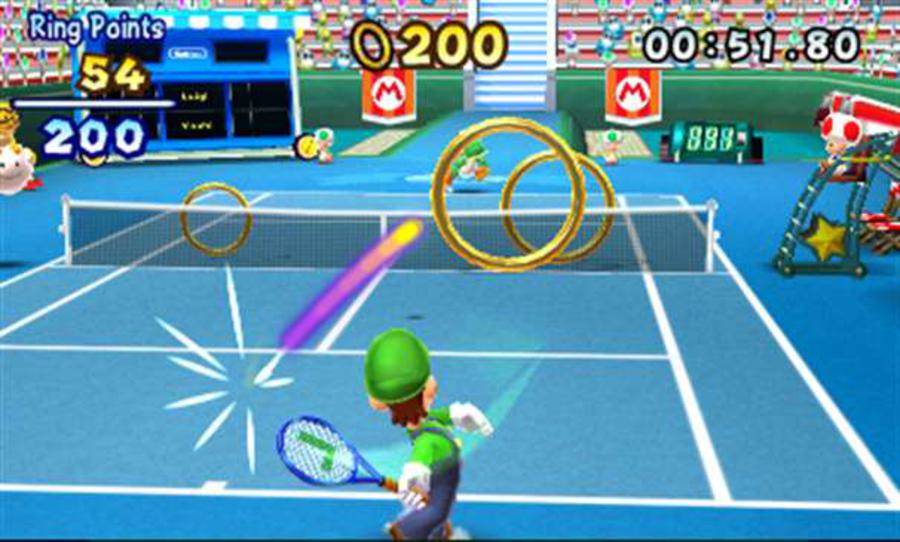 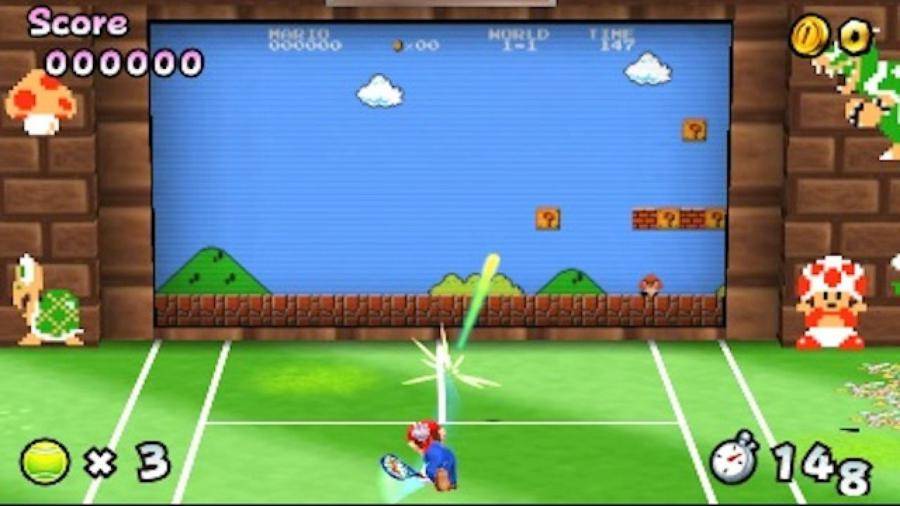 It isn’t until later in the game, certainly after you’ve beaten the first four championships, that you will start actually have to use skill. And then you’ll need it in heaps, because your opponent will have far more opportunity to use the powers than you will.

This mainly results in you being on the defensive constantly. So important are these powers that the Tennis itself hardly enters into it.

It will probably take only a few hours before you realize that you’ve almost seen everything that Mario Tennis Open has to offer. This is unfortunate, because although there is an over-reliance on the magic powers, the actual Tennis is quite good. It’s not used enough, but it’s quite good.

It would’ve been nice to have different game modes, different things to see, but for the most part you’re trapped into the exhibition modes – single games that you set up yourself – or the championships, of which there aren’t many. There’s not even an RPG-like story to play through, gluing together matches with quiet exposition. This is Mario Tennis. You’ll play Tennis.

You end up with something that never feels like it's lacking, until you actually think about it

Like Mario Kart, there’s only a small group of championships to pick from. You’ll need to unlock each as you progress. When you beat the first four, you become a champion, and you will unlock a further four championships. These are harder, although, as above, they’re only harder because you have to wait longer between power-ups.

Someone very good could probably beat all this within a single sitting. I almost managed it and I’m absolutely terrible. Once you’re done, it’s just a case of rinse and repeat. If you don’t really love the core gameplay, you could easily beat Mario Tennis in a single night’s rental.

Of course, you can choose from a number of different characters, and you can play through the championships and get the gold for each of them. They’re all different – playing as Bowser is the opposite of playing as Diddy Kong – but it’ll take only a match or two to adjust. After that, you’re just beating the same characters on the same courts.

There are series of mini games as well, each with their own difficulty levels, but these seem unlikely to extend your experience too much.

Instead, the crux of the game’s longevity lies entirely on its multiplayer.

The multiplayer, believe it or not, is pretty much as Tennis-based as the single player. You’re put into a match, you play as well as you can, you move onto the next match. Power-ups are as important as ever, and you’ll basically be defensively playing until you get a shot at a power-up.

At this point, the only people playing seem to be very good and you’ll probably spend your first few hours getting indiscriminatingly creamed. Ratings help to keep you focussed, but unless you’re just desperate for more Mario Tennis Open, you’re not missing out on much if you give up after only a few matches.

The Feel of the Green

Like all Mario games, Mario Tennis Open looks very clean. Nintendo are known for their excellent design and smooth animations, and, although this won’t win any awards, you’re never going to be put off by ugly graphics.

It’s also worth noting that the 3D effect is largely useless. It doesn’t add much, surprisingly, and it’s one of the few games on the console that I felt entirely benefited from having it turned off.

The sound design is exactly the same as the visuals; more than capable, but hardly pushing the boat out.

You end up with something that never feels like it’s lacking, until you actually think about it.

That’s probably a good way to describe the entire game. It’s fun for what it is and small children especially will love playing Tennis with their favourite characters. Even so, there are things about it that just don’t go far enough.

You don’t get the replayability or deep tactics of something like FIFA, instead you just get a set of minigames. It’s a decent, but bare bones release