Since the original ‘Luigi’s Mansion’ released for the GameCube in 2002, fans and enthusiasts have been yearning for another opportunity at ghost hunting. Nintendo’s E3 conference in 2011 left gamers in awe after the unexpected but welcome announcement of Luigi’s Mansion 2: Dark Moon, a sequel to the original game, for the 3DS. Luigi’s Mansion 2: Dark Moon does a great job, not only with improving the ghost hunting mechanics but also by adding quirky personalities to ghosts and allies alike, making for an incredibly charming experience.

In the opening cinematic, we see Professor E. Gadd researching the seemingly friendly ghosts that reside in Evershade valley. Out of the darkness of the night, King Boo appears and shatters the Dark Moon into five pieces; spread to each mansion of the valley, making the ghosts act all aggressively again.

Luigi is then unexpectedly pulled into Evershade valley through the use of E. Gadd’s pixelator, a device that allows Luigi to be pixelated and reformed in different areas (this is also how Luigi travels to each mansion). Without giving Luigi much of an option, E. Gadd equips him with the latest Poltergust 5000 model, an original Nintendo DS which is utilized as a map and flashlight. With the guidance of E. Gadd, his intuition (and a lot of luck), Luigi must traverse the premises of each mansion, reunite the shattered Dark Moon pieces and restore balance to Evershade Valley.

What really stands out in Luigi’s Mansion 2: Dark Moon is the fact that the game has been made for on-the-go sessions and Next Level Games have fully understood that. Every mansion consists of quite a few missions, each lasting for around 10-20 minutes.  Missions can be prolonged though, by searching for gems, boos and secrets. Puzzle solving is a necessity for uncovering secret rooms and will reward you with large monetary amounts which are then used for upgrading the Poltergust.

The addition of the new Polterpup ghost is most welcome. Throughout Luigi’s ventures into each mansion, he will encounter Gold Dog Bones. These bones act as an ‘Extra-Life’ system, allowing the Polterpup to dig one up from Luigi’s pocket every time the ghosts scare him to death. Luigi’s Mansion 2: Dark Moon’s actual story isn’t as challenging as I would have liked it to be but, on occasion, a Gold Dog Bone will definitely come in handy. 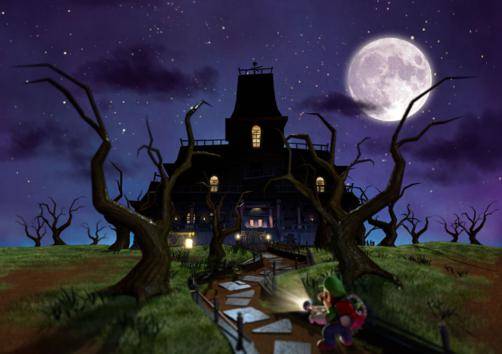 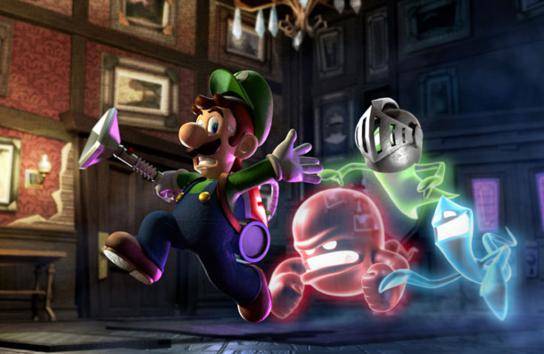 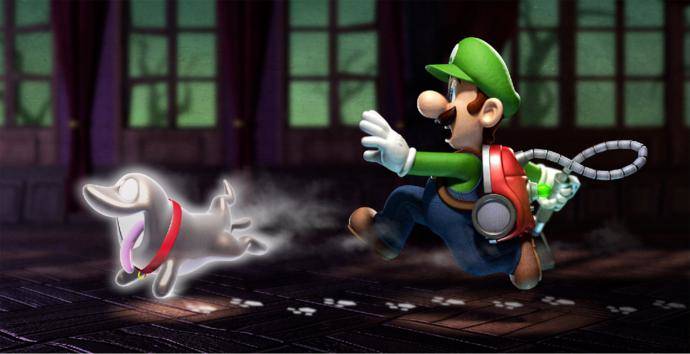 One of the main gadgets that Luigi will utilize is the Dark-Light. This flashlight add-on allows Luigi to find invisible objects, secret doors and paths or even the mischievous Boos that have caused all this trouble. The Dark-Light will also be required to solve various puzzles and find secrets hidden from plain sight (literally).

There are 5 mansions featured in the main game with a sixth one exclusive to multiplayer. Each mansion has its own unique look and contains countless, deviously hidden secrets and puzzles to find and solve, respectively. Be warned though, as some of these puzzles are extremely intricate but in result, make for some of the most innovative and satisfying experiences available in a 3DS game.

Luigi’s Mansion 2: Dark Moon is the first game in the series to feature multiplayer and boy have Next Level Games nailed it! The multiplayer exclusive mansion, dubbed ‘The Thrill Tower,’ is basically a never-ending series of floors where players can hunt ghosts with friends or over the internet. The Thrill Tower can also be set to have 5, 10 or 25 randomly generated rooms, in addition to the infinite option.

While a very smart move from the developers, incorporating the essence of the main game into multiplayer (as most games should do with multiplayer), it does suffer from some minor glitches on occasion. Other than that, I have to say that the way that the developers have approached Luigi’s Mansion’s multiplayer is brilliant, fun to play and definitely what most developers should strive towards!

The ghosts are back and better than ever, with all-new animations and sounds that highlight each and every ghost’s personality and charm. Through the use of different household objects and appliances, there are varying appearances of the same ghosts which, in return make the game feel fresh throughout.  The 3DS’s very capable hardware acknowledges every little detail, from the cobwebs to the bosses of every mansion. In addition, the very good implementations of the 3D effect, alongside the light work, showcase the unique eeriness of each mansion.

The music in the game also adds to that Luigi-is-scared charm that the game delivers. Without the sudden music rise or the agonizing silence that keeps you alert, the game wouldn’t be the same and wouldn’t have that unique feel that it manages to capture so well.

Luigi’s Mansion 2: Dark Moon is a must-play for any Mario, Luigi or Nintendo fan. One can argue that Nintendo has lacked innovation in more recent years BUT what they have managed to do with Luigi’s Mansion 2 is truly astounding. As short as the game is, it is definitely worth a play, even if you decide that the spooky atmosphere of Evershade Valley isn’t for you.