Kingdom Hearts is a franchise well-loved by RPG and Disney fans alike, not surprising considering its impressive blend of animation-based nostalgia and slick gameplay. The first two games were met with critical acclaim, but it was spin-off after spin-off that has caused some to abandon the series, waiting for the holy grail that is Kingdom Hearts 3. Dream Drop Distance, for the 3DS, is about the closest we’ve ever come to a full Sora-and-Co sequel, but is that enough to look over the fact that this is, effectively, just another spin-off?

Sora has finally learnt about Terra, Ventus and Aqua, the main characters from the PSP’s Birth By Sleep. He and Riku choose to rescue them, but first they must pass the mark of mastery and become full-fledged keyblade masters. To do this them must visit worlds previously lost to the darkness, resurfaced and unaware of other worlds. 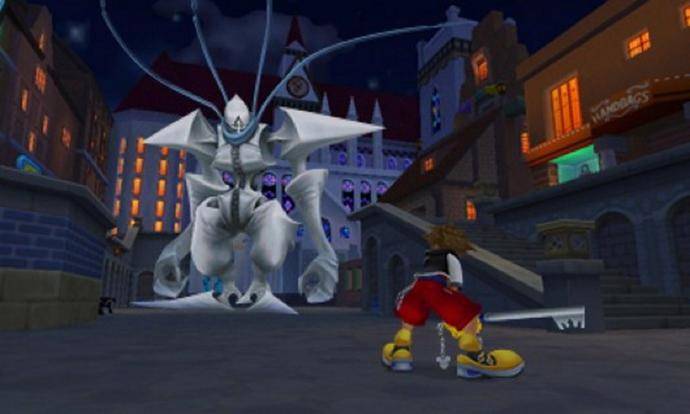 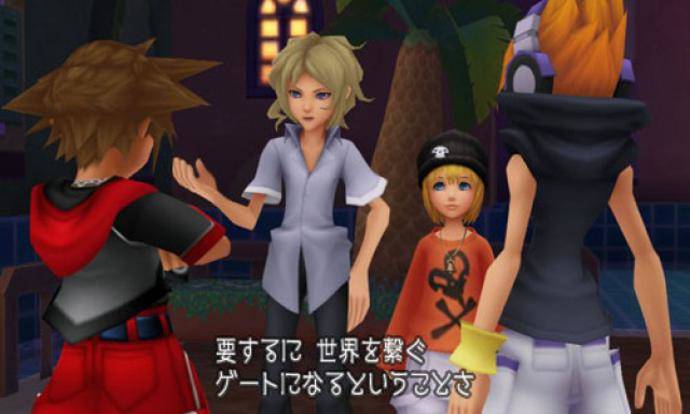 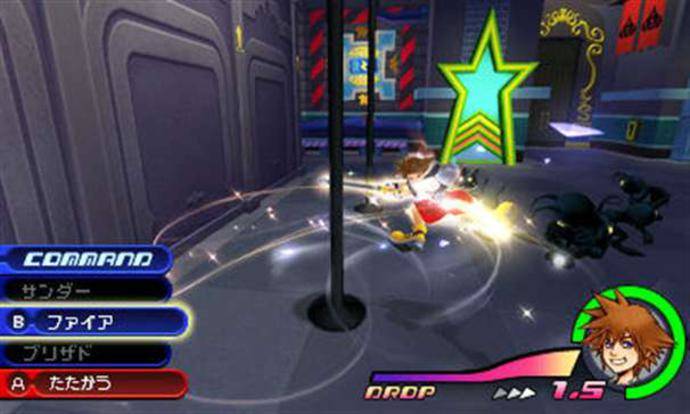 The story is as cheesy as in the other Kingdom Hearts games, with lots of talk of “hearts,” “friends” and “connections.” It does add an important part to the Kingdom Hearts franchise, and supposedly sets up a lot for Kingdom Hearts 3. If nothing else, fans of the franchise will want to check it out for that alone.

Much of what made the Kingdom Hearts series great, especially on handhelds, returns for Dream Drop Distance. Quick action, over the top magic and special moves, a nice progression system and more than a little Disney will keep you progressing through the story. There are seven new worlds to explore, all of which are completely new to the franchise, several of which have characters we’ve never seen before as well. After some of the other spin-off games have focussed on locations and characters we’d already met, having entirely new stories is a breath of fresh air.

As you explore, you’ll come across endless random battles. This is both a good and a bad thing, because although the combat is still very fun, the rate at which you gain experience is really very off-putting. You’ll get to the boss at the end of a world and you’ll still not be able to beat it comfortably. This makes grinding a necessity, and less dedicated Kingdom Hearts players might find hours in one location very annoying.

That’s not the only annoying thing though. Kingdom Hearts 3D has a pet system. Spirits, the good version of the Dream Eater enemies found in the game, aid you in combat, and whilst their very useful in that purpose, in return you have to look after them and help them grow. This is no Pokemon and the whole thing seems a little tacked on. I can imagine some people will love it – probably the same people who find value in the grinding – but it became a big barrier in finishing the game.

The command deck returns from Birth By Sleep, giving you almost complete control over the way you fight, but there’s also a nice new feature called Reality Shift. This lets you move quickly from place to place and perform a few extra special moves. It’s especially helpful in battle. It takes a little getting used to, certainly in enclosed spaces, but it’s a nice way of speeding up travel and a nicer way of avoiding damage.

Of course, it’s not just the new additions that make Dream Drop Distance. This is a game steeped in Kingdom Hearts lore, and that counts for the gameplay as well. If you played the first two games, you’ll be able to pick up where you left off (with a little reading on previous titles). Instead, I’d be more worried about recommending this to someone who has played every game in the franchise. 3D isn’t a mile away from previous spin-offs and, even with the new additions, it doesn’t feel different enough to really feel fresh. If you felt fatigued with Birth by Sleep, you’re unlikely to feel any different here.

Fortunately, for those that can stomach the pets, the cheesy dialogue and the occasional issue, this is easily the best of the spin-offs, even narrowly beating out Birth by Sleep.

Kingdom Hearts may never have looked any better. The 3DS really suits the franchise, and even the 3D seems to add quite a bit to the experience. That’s when you’re static or approaching an enemy, anyway. The rapid camera angles and occasional tight shot will likely get you turning down the 3D, if not turning it off altogether. You almost certainly will feel sea sick after a while.

Aside from that, the graphics are stunning. The worlds you’ll explore are colourful and varied, the level design is interesting and challenging and the Disney IPs have been wonderfully looked after. No complaints for the game itself, it’s just a shame occasional clunky camera will put you off taking full advantage of the 3D.

Kingdom Hearts has always boasted some of the most beautiful music in all of gaming, and the most impressive voice cast of any franchise. That doesn’t change for Dream Drop Distance. Although it’s a portable spin-off, everything is as great as you’d expect it. The music is completely engrossing and the voice cast constantly deliver their marks, especially from the Disney side of things (as you’ve expect, given that they’re the “official” voices of such well-known characters).

Dream Drop Distance is a great game, its biggest fault being that it’s a part of such a drawn out franchise. Had there not been so many games over the last ten years, all of which do basically the same thing, perhaps it would have felt fresher, but its place in the series will guarantee some people will give up part way through. There’s also a few ill-advised features, the Spirits especially, that just don’t have a deep enough system behind them to entertain adults in the way that, say, the Pokemon games continue to do.

If you can get over the franchise fatigue and if you can deal with the pets and the grinding, this is a game that will give you hours of entertainment. If you’ve been patiently waiting for Kingdom Hearts 3 for the best part of a decade, if the other spin-offs haven’t been enough to fill the Kingdom Hearts shaped void in your life, there’s going to be no difference here.