The problem with Dungeons & Dragons was that it could only be played with a group. Desktop PCs in the 80s had a few text adventure games that mimicked the D&D experience as a single-player adventure, but PC’s were rare and pricey back then. A cheap, portable alternative were Gamebooks that used printed text and images to replace a live dungeon master. They also had simplified D&D style rules to govern variable and give players choice over how their adventure played out.

Earlier this year the development studio Inkle adapted the classic old gamebook Sorcery! for mobile devices. We quiteliked the results, but were sad to learn that we’d have to wait five months before they released their adaptation of Part 2 of the four-part series. Each installment is coming as a separate app that can be played on its own or players can import their game saves over from previous installments. Part 2 was released earlier this week and gamers can continue this nostalgic adventure from the pen & paper days.

Part 2 plays very much like Part 1, but there are a few refinements. Players can now choose the gender of their hero with a gender-specific icon that appears on the map, and a few lines of text that will vary depending on gender choice. The magic system is now prettier in terms of the interface as well, but otherwise the two games play mostly the same. Players who are new to the series won’t notice these changes because an update for Sorcery! Part 1 has added these features to the first game.

An update for Sorcery! Part 1 has added these features to the first game

Those who are just discovering this series should strongly consider playing part 1. It isn’t necessary, but it does allow players access to some story elements and inventory items that carry over into the second part. These will in turn carry over into the next two parts as well for those who stick with the series. 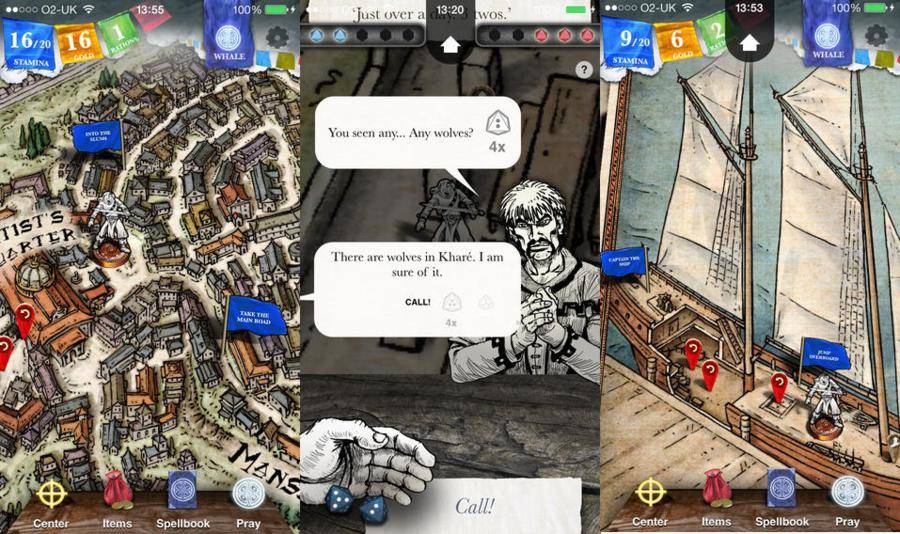 Part 2 doesn’t have the nostalgic wonder brought about by the first game. The first time middle-aged gamers looked at the art in Part 1 they were taken back to the old days.  Now, to keep players around for the entire series, the game needs to stand on its own feet. Luckily for everyone, the newest installment is significantly longer than its predecessor, and offers a much more complex adventure.

The first Sorcery! game had players control a novice adventurer on a cross-country journey, but this time the story takes place inside a single medieval town. Despite the smaller area that the character traverses, the game is actually much larger. Players can expect twice the amount of play time in Part 2. These games are designed so that there are branching paths and story choices, so the larger size is exponential if players choose to run through the story multiple times.

The Sorcery! series is something increasingly rare on mobile platforms

Players who want a quick portable adventure can just drill through the campaign in a couple of hours. The designers have built the adventure so that it can be Beaten without aggressively exploring the world, however there are multiple endings which will have effects on the forthcoming games.

In order to properly complete the adventure without negative consequences in the future, players have to track down the four fragments of a spell that allows them to exit the city. This requires a thorough exploration of the city, and the cleverness to solve mysteries and deal with various characters along the quest.

The newest installment is significantly longer than its predecessor

As with the first installment, players can use swordplay, magic, stealth, or diplomacy to solve the various quests.  There is no class system, but players will have the chance to focus on weapons or magic as they go.  Combat now has the option for non-lethal fist fighting, so players will be able to defeat enemies but still keep them around in case that character might come in handy later.

The Sorcery! series is something increasingly rare on mobile platforms; a great game offered at a reasonable price without Free-to-Play shenanigans or Premium Content. Younger gamers who don’t recall this sort of product from the old days will be impressed at how much interaction game designers could put in a gamebook (That was played without the benefit of these new-fangled thinkin’ machines). Older gamers will appreciate the reverence that the iOS designers have for the original material. However anyone, regardless of age, can appreciate the rich narrative and compelling world of this series.