Dennis is having a bit of a bad day. The world has been frozen over, he’s all alone, he has nothing but a creaky bicycle to make his way through the frozen hellscape and, on top of all that, some video game player keeps dressing him up in silly clothes. Dennis is the unfortunate fellow who stars in Icycle: On Thin Ice, and over the course of the game he will be crushed, impaled, exploded, and forced to suffer the indignities of being treated like a Barbie doll by a cruel, unsympathetic player.

Icycle: On Thin Ice is about ice, and bicycles (Get it?). It’s also a puzzle/ platformer where players guide a poor little man through a treacherous world of moving platforms and pointy things, trying to get him safely through a series of levels. It uses basic touch screen controls of left, right and jump to navigate the 2-D world, and there is also the option to hold the jump button which will make Dennis float with his umbrella.

It has a bit of a physics component to it too, Dennis’ movement is affected by inertia, and his bike takes a little time to build up speed or to stop. Objects around him are also likely to move at inconvenient times, forcing the player to quickly react to these sudden changes in the environment.

The actual mechanics aren’t terribly innovative, but the real fun of playing is the art style, and the developer’s wicked sense of humor. Dennis’ adventure takes place in bizarre locations like the insides of a fish, a collapsing city, and landscapes that bear striking resemblances to various pieces of modern art. Dennis himself starts out as a rather nondescript English chap, but players will be able to unlock an assortment of less proper attire for him. They can put him in a ladies nightie, stretch a rubber glove on his head for a hat, turn his distinguished umbrella into pretty parasol, and choose from a series of bicycles for him to ride around on. 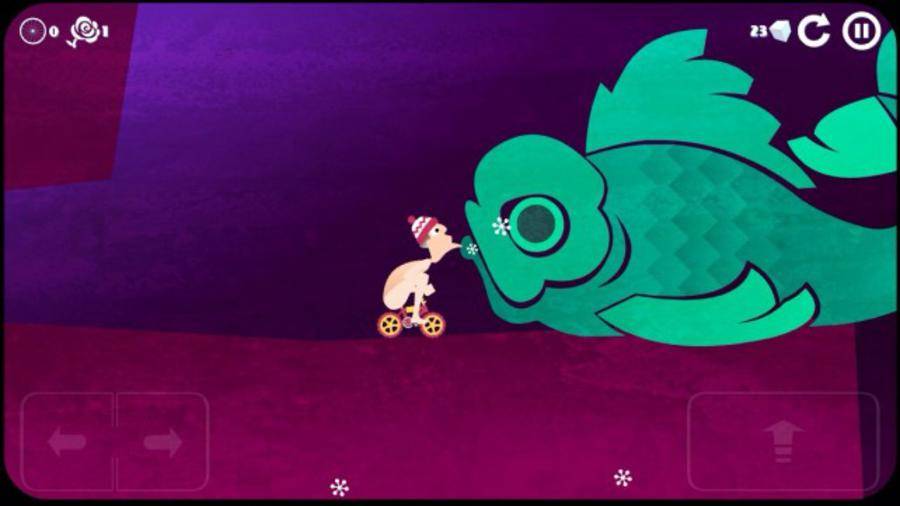 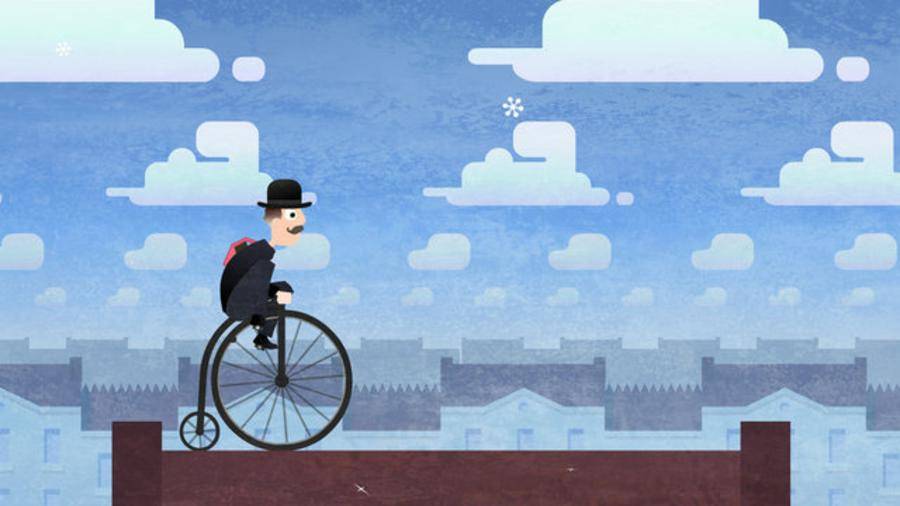 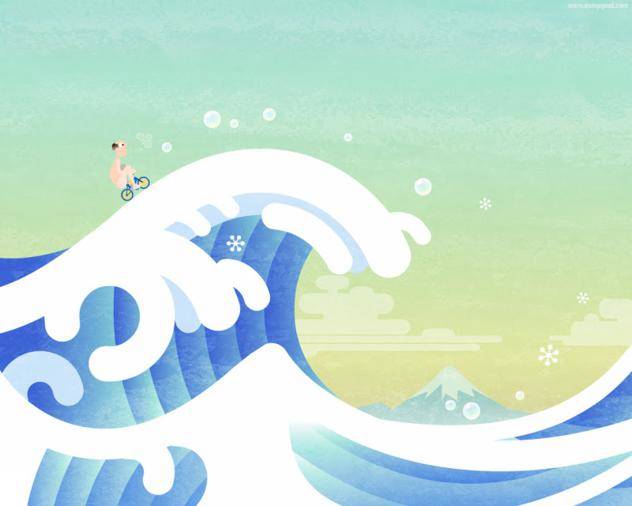 These upgrades are usually cosmetic and don’t affect gameplay, but a few of Dennis’ upgrade will allow him to gather collectibles more efficiently. Players can replay any level that they’ve cleared, and there are hidden collectibles that can only be accessed through replaying old levels with the right items equipped. Each level also has a series of hidden challenges, such as making it through without dying, finding a certain item, or using a minimum number of jumps. By completing all of these challenges players will unlock a bonus, the original Icycle game (Players also have the option to buy in-game items with real money, and this includes the original Icycle.).

As Dennis makes his way through this horrible world he will die quite often. The designers have made a few levels that require trial and error to complete, so our wretched friend Dennis meets his end rather often. The animations and voice work for his death scenes are comical, so players shouldn’t feel too bad about the many times that Dennis gets squished by a rolling pentagon.

Often the levels will place Dennis in a place where he seems to be momentarily safe, only to suddenly drop something heavy on him with little warning. Gamers might think this is unfair – and it is –  but the comedy effect of Dennis unexpected demise is usually worth the gameplay frustrations. Players will shake their fists at the development team but no one ever said comedy can’t be cruel!

Icycle: On Thin Ice is a $.99 game that can be completed without additional in-game purchases, however the difficulty begins to increase about halfway through. Among the power-ups that can be purchased are items that let players skip over tough levels. Players who don’t want to spend real money can still grind older levels for icecubes which Dennis collects as the in-game currency.

Icycle: On Thin Ice will keep mobile gamers busy for a few hours getting through the main story, but there is substantial encouragement for replay. Platform/puzzle enthusiasts will have a particular liking for it and the satisfaction of beating all of the challenges. It’s difficulty makes it a worthy opponent for most players, while the sense of humor alone is worth the price for those who value a bit of silliness now and then.