If you follow mobile games at all, you’ll probably have heard of The Drowning. It’s the latest first-person shooter to be brought to iOS and the one that the developers have promised us will revolutionize the control scheme for shooters on touch screens. On top of that, it’s a game about some sort of crazy water zombies coming from the ocean to drown all human life.

How much could go wrong?

Keep Your Head Above Water

The first thing everyone will be wondering about going into The Drowning is the control scheme. No longer do we have to suffer with the imprecision of ridiculous virtual sticks and buttons! The developers have come up with a new idea that, while it could never rival a real controller or mouse/keyboard setup, actually works to a surprising degree.

No longer do we have to suffer with the imprecision of ridiculous virtual sticks and buttons!

The game plays in first-person, and a simple tap will make your character walk to that point. You change the direction you are pointing simply by swiping with your finger, so moving and looking around are simple and intuitive. You’ve also got a little icon at the bottom of the screen to execute a quick 180 degree turn if the monsters are getting a little too close for comfort.

Shooting is just as easy as moving and looking, which is good because you’re going to be doing a lot of it. Simply tap with two fingers, and a bullet will be fired directly between them. It’s simple, it makes sense, and it works well enough that you’ll be surprised that nobody thought of this implementation before. You’ll want to head to the options menu and turn on the ability to move and shoot at the same time (for some reason it is turned off by default) so that you can easily tap where you want to go, spin yourself around with a quick 180, and then start blasting away at the creatures who are surely following you.

There’s a bit of a story line, but it’s mostly a throwaway excuse for getting some drowned monsters in front of your gun barrels, and the disconnect between what little story there is and the gameplay is such that you’ll find it a struggle to pay any attention no matter how badly you might want to. 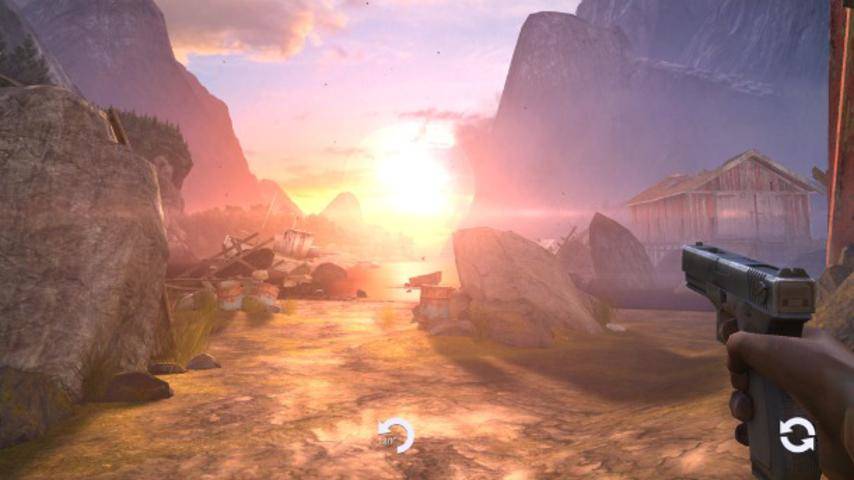 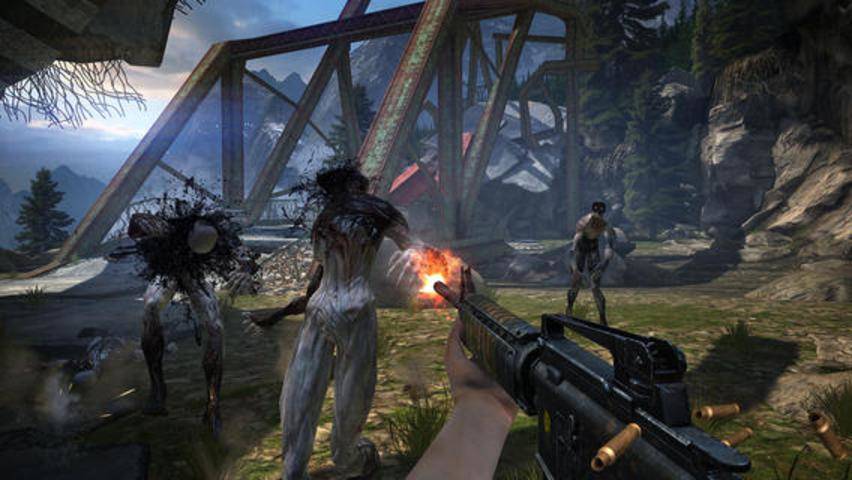 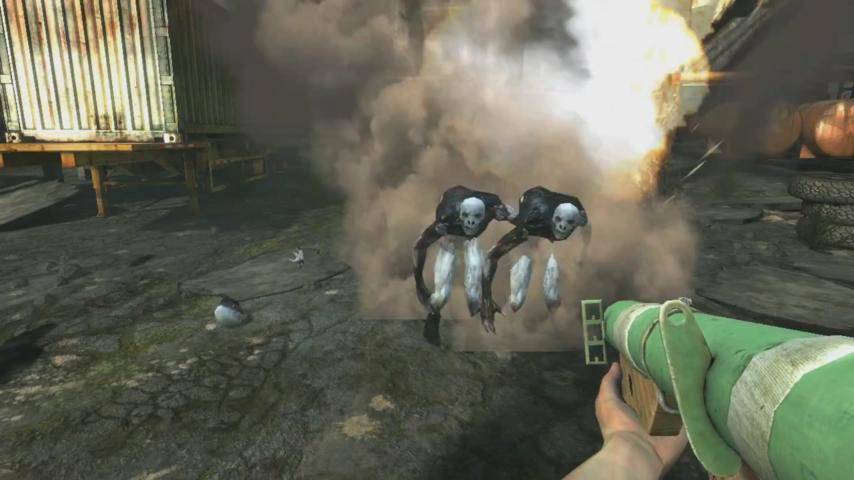 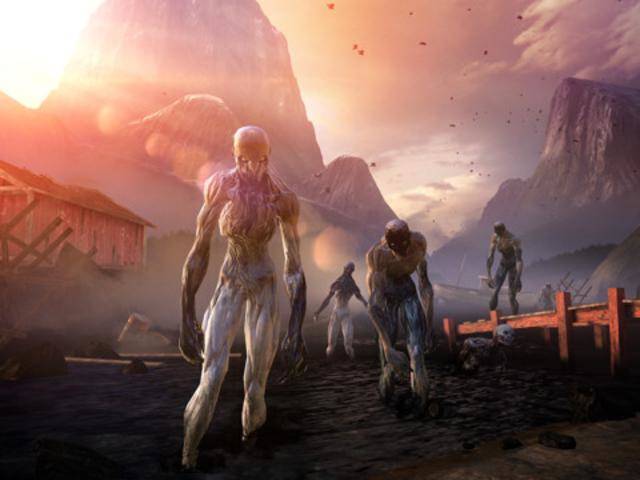 Every level is either an ‘Attack’ or ‘Defend’ mission, a choice of which largely only affects the size of your play space. While every level is just an arena you can run around in and shoot at monsters, on the Defend levels you’re stuck in an even smaller area of that particular arena, typically a structure of some kind, and tasked with shooting the creatures that are tearing the boards off the crude barricades you’ve (apparently) constructed.

No matter which type of level you choose to play, you’ve got two minutes to rack up as many points as possible and are awarded with random crafting materials depending on the amount of points gained. When you have enough of the right types of items, you can craft new weapons and upgrade the ones you currently have, but it’s often unclear just how upgrading the weapons really helps on the battlefield.

No matter which type of level you choose to play, you've got two minutes to rack up as many points as possibl

If the idea of heading into a series of two-minute arenas to kill things and get random crafting loot sounds a bit shallow, well…that’s because it is. It can be made frustrating by the fact that you’ll be replaying levels TONS of times to try getting the rare loot that allows you to build your ‘main mission’ item, the thing that unlocks a new set of levels to run around and gather more random loot in. Add to this the fact that the game uses everyone’s least favorite freemium model: the ‘fuel’ mechanic, in which you are allowed to do a limited amount of missions before waiting an indeterminate amount of time or paying some cash to keep going.

There are some levels where you won’t be able to kill the monsters because you don’t have a specific type of weapon. You will not be warned about this, you’ll just load in, try to shoot some monsters and do no damage, and then be sent back to the menu and told you need, for example, a scoped weapon to kill those monsters. You’ve wasted ten seconds that could have been avoided with a simple notice in the menu, and the game still uses one of your units of fuel for the attempt! You’ve been punished for something you had no way of knowing about, and are now one step closer to having a shell out some cash if you don’t feel like waiting.

You’d be forgiven for quitting the game right then and there, and I am certain that some people have done just that.

On the bright side, if you find yourself getting into a groove with the game, there are an incredible amount of weapons to unlock and upgrade, so you’ll be playing for a good long time. The controls make this a decent shooter for a touch screen, and if you are just looking to spend a few minutes blasting some violent creatures, you’ll probably have a good time with The Drowning.

Long before you notice that you’re just doing the same thing over and over again hoping for a positive result (isn’t that the definition of insanity?), you’ll notice that the graphics in this game are great. The environments are filled with appropriate amounts of mood setting decorations, and the monsters are disturbing enough that you’ll want to keep shooting at them long after they’ve been blown to pieces. It’s not Crysis or anything, and probably falls a bit short of the graphical power on display in Deus Ex: The Fall, but The Drowning looks a bit like a late PS2 game playing in HD.  For a gaming device that is essentially just a screen, that’s not half bad.

The Drowning is a great looking game that controls better than any other first-person shooter currently available for iOS. It’s just unfortunate that the actual gameplay amounts to little more than running back and forth while shooting the creatures and hoping that you make enough points in two minutes to get some decent crafting junk. There’s absolutely no reason not to try The Drowning as it’s free and you’ll want to see the game in action and try out the clever controls for yourself.

Still, I can’t help but think that the average player is going to want a little more incentive than “Unlock another gun that you can use to keep doing the same thing over and over again.” The Drowning is an excellent tech demo showcasing some fantastic graphics and an inventive control scheme, but the gameplay itself is a bit waterlogged.