Dubai, like many places in the east, is a city of opposites. Wholly modern but with tradition and history spanning millennia, it’s one of those places that almost everybody has heard of, but many wouldn’t be able to place on a map. It’s a beautiful city but one that is often understood (partly thanks to strict control of their image), and that’s partly why the developers behind Dubai Delivery decided to make their game.

On some levels they succeed in painting a rich tapestry of life in Dubai, and I found myself learning things I never knew. But in all the excitement of a city-worth of history, they forgot to include the most important of things.

Dubai Delivery is very, very simple. Send your fleet of vehicles to the right place with the right cargo. Each depot has a series of parcels that need to be taken somewhere else – load ’em up and let ’em go.

You earn cash by making successful deliveries, but that cash can be multiplied by packaging together boxes of the same shape, size or markings. The better you package it, the more money you’ll get when the delivery is made.

Dubai Delivery is very, very simple. Send your fleet of vehicles to the right place with the right cargo

With your money, you can unlock new depots, buy licences (which you’ll need to do just about anything) or new vehicles. The bigger you make your empire, the more cash you’ll be able to make, and the more you can put into your empire, which means more cash, which means…

It’s pretty much the same as any other sim title in that regard. And like every other sim title, it becomes more fun as things go on. That has to be the case though, as there’s very little fun to be had when you first open the doors on the Dubai Delivery Company.

When you have only a handful of vehicles on the road, you must wait for them to go from depot to depot, then you load them up (which takes only a few seconds), and then you send them out again. Rinse and repeat until you get bored.

The opening few hours of the game will entirely consist of you waiting for things to happen. If you’re the sort of iOS gamer who plays for a few minutes at a time, you won’t really even notice. Those that want to play straight through, who want to have deeper control over the business, might see it as little more than a shape packer. Stick the object in the right place at the right time and then wait for the reward. 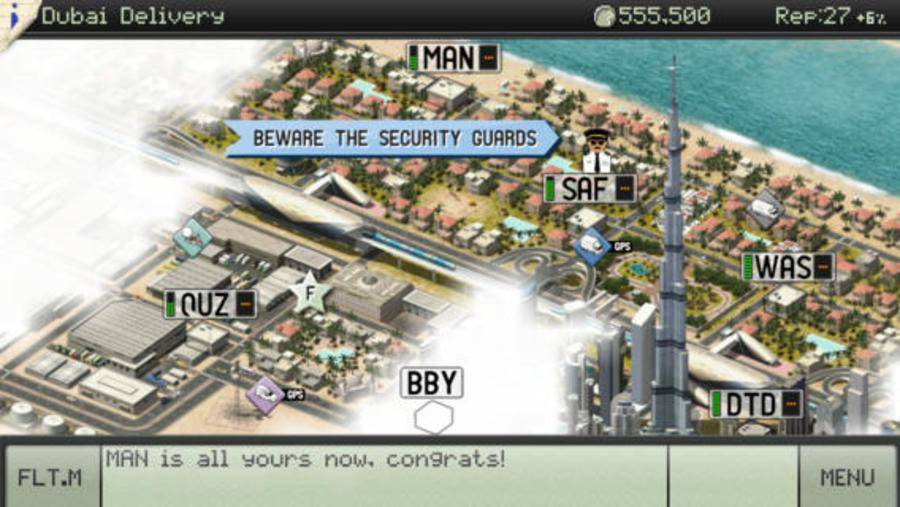 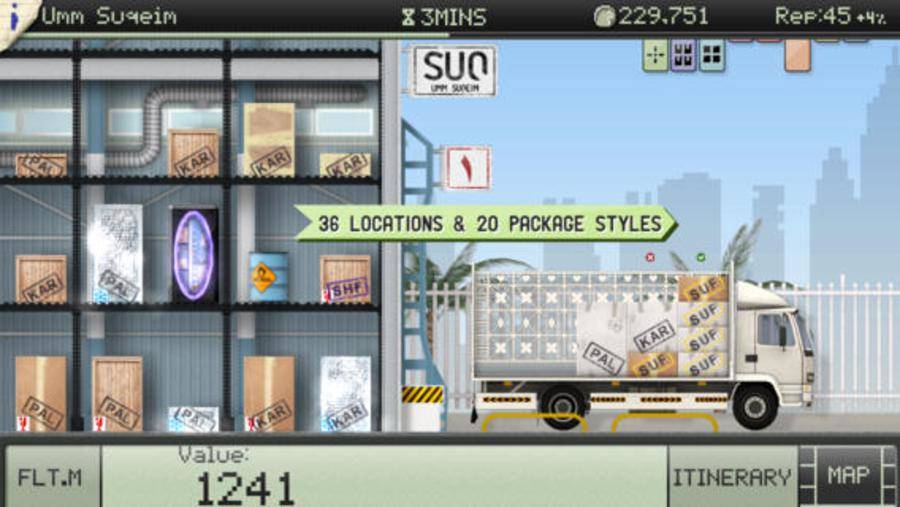 It’s deeper than that, and much more difficult, but it’ll take a time investment for you to truly find out just how much better it gets. The developers have given little reason for you to put in that time investment, so it entirely boils down to how much you care about Dubai or how much patience you have.

“Your Vehicles Have Arrived”

There are some nice aspects to it. It’s fantastic to see the city in full, not only because the art work is quite nice but because it gives a real sense of scale. People usually see cities as a series of skyscrapers, a dull concrete jungle coated with vermin and filth. From above, in the way that Dubai is displayed here, it’s almost poetic. You can see a million lives without seeing a single person.

Factoids appear across the screen as well. Click the little gold star when it lights up, and you’ll learn something you never knew. These are written quite casually, are often filled with humour, and offer a view of Dubai from the perspective of somebody living there. They’re also often filled with spelling errors and can be a little back to front with the dialogue, but that doesn’t stop them from being entertaining and informative.

If you do want to play a bit at a time, you can leave the app after setting all your vehicles to work. You’ll get a little message to let you know that all of your vehicles have performed their assigned duties, and that you can jump back in whenever you’re ready. It’s a common feature amongst games like this, but Dubai Delivery manages to avoid being invasive or overly showy in its alerts.

For the most part, the problems in Dubai Delivery could have been ignored if you adjusted your play-style or lowered your expectations. You shouldn’t have to do either, of course, but you’d still have the potential to enjoy what is on offer.

And then you notice just how much everything is. Unlocking a new area can cost up well over 20,000 falcoins, even in the opening hours of your business, and that’ll rise pretty rapidly. A new licence can cost several times that. To earn this much through hard work alone could take you weeks.

Few games manage to alter your perception, and it's even rarer in a mobile game

This is made worse by the fact that your depots start accepting packages to places you haven’t unlocked. That’s hardly realistic and almost feels like a pressure tactic, as more and more boxes turn up that you can’t actually deliver.

Come across something you can’t afford, and you’re offered a trip to the bank. The bank is a euphemism for the IAP portion of Dubai Delivery, in which you can buy game boosters or just shell out on falcoins. To see everything, you’ll need a lot of falcoins.

Dubai Deliveries is free-to-play, so the developers should be allowed to offer some sort of paid lock to their game. The game is the lock though, and when you realize it, you won’t want to part with your hard-earned cash. You’ll just want to turn everything off and walk away.

Dubai Delivery isn’t one of those hits you hear about so often on the iOS platform. You’re not going to be raving about it or passing on word of its awesomeness to friends. It does what it does, and it does it in a way that’s not only interesting, but might just give you a new view on a place far away.

Few games manage to do that, to alter your perception in that way, and it’s even rarer in a mobile game.

It’s such a shame, then, that there is so little game here, that the developers didn’t build it to be more Game Dev Story and less Farmville. If they could build upon what was already there with a little more control, they’d have something unique, something fun and interesting.

For now though, Dubai Delivery is fun in small doses, but probably won’t hold onto your attention in the long term.