Everyone in Bay City is in a hurry. There is something to do and somewhere to go at all times, and they won’t let anyone slow them down. In a fast-paced city like that, taxi cabs are a booming business looking for talented and fearless new drivers to step up and build clientèle – that’s where you come in. You play as Gena’s Cab Company’s newest hire and there’s already a list of pick-ups for you to tackle. After a quick tutorial it’s time to dive right in to the hectic energy of Crazy Taxi: City Rush and start building a name for yourself as the area’s best new cab driver. Let’s get driving!

If the name Crazy Taxi sounds familiar to you, you’re likely being hit with a wave of nostalgia for SEGA’s original racing taxi game of the same name released back in 1999. One year later the game was brought over to the Dreamcast gaming console and shortly thereafter birthed several sequels featured on Playstation 2 and Nintendo GameCube. Crazy Taxi is a classic game that influenced almost every future racing quest-driven game that came after it.

I applaud Crazy Taxi: City Rush for going the extra mile and trying to bring more when they could have settled for the typical

Crazy Taxi: City Rush is the first Crazy Taxi game to be released in close to seven years, and it stays true to the formula of the prior releases. Crazy Taxi: City Rush was released in March of 2014 exclusively as a free-to-play game for iOS and Android phones. City Rush has temple run gameplay, with the player having no control over the speed of the taxi, only being able to turn the wheels or slam on the break. The controls are extremely simple with motions like repetitive clicking to brake and swiping your finger to the left or right to switch lanes. One very exciting feature of City Rush is that you can play the game in both landscape and portrait mode, something that is rarely seen in mobile games.

A Game with Personality

If there is one thing that Crazy Taxi: City Rush doesn’t lack, its style. It’s an energetic game with personality and humor that keeps the highly repetitive gameplay feeling fresh. Each passenger that you pick up has a unique destination and story to go along with their travels.  At the end of each drop-off, a fun cut scene is prompted to tell you more about the client’s story. In a game like City Rush, the last thing you are expecting is a story, and getting to see a tiny moment unfold with each pick up keeps you invested and curious about the city you are servicing. 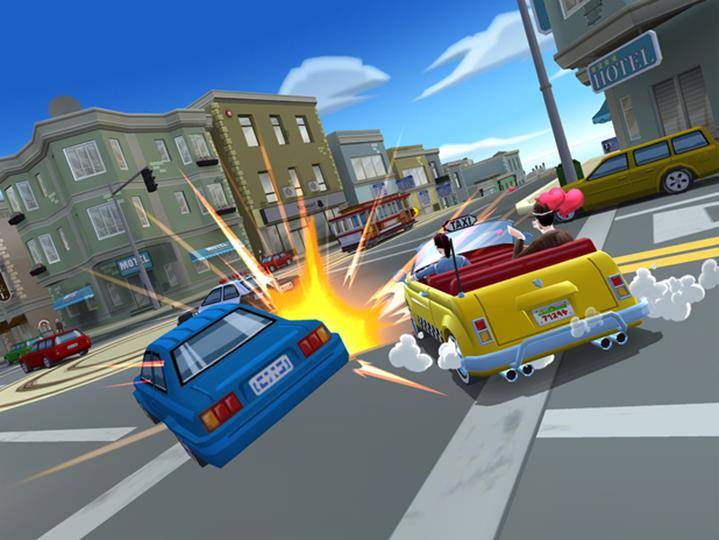 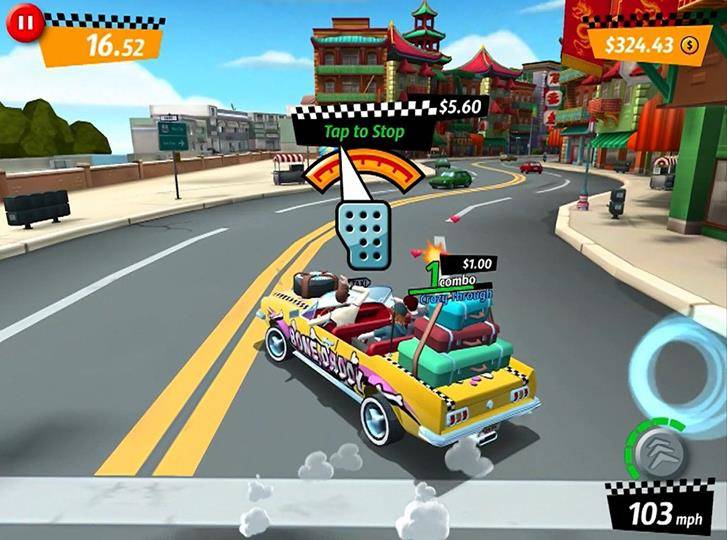 The humor of City Rush cannot be overlooked either. A game that is willing to make fun of itself and have a playful wit can be hard to find, and certainly not something I would have expected to come out of a mobile game.  The personality of the characters, attention to story, and comical writing keeps you engaged in City Rush as the time ticks by, and suddenly you’re ten missions in and it’s time for bed.

Mobile games have the tendency to be rather monotonous because of the limitations they face in their development. Most people don’t expect a deep story or impressive graphics from a game that they can play for free on a tiny phone screen during their lunch break. I applaud Crazy Taxi: City Rush for going the extra mile and trying to bring more when they could have settled for the typical.

The missions in City Rush are simple: get the client from point A to point B in a certain amount of time and win a cash prize while simultaneously building your reputation. Each mission, once completed, offers an overall rating as well as a breakdown of the different factors that add in to it. Things like how much damage you caused to the city, how quickly you drove, as well as other small bonuses picked up along the route, add together to create your overall score. The higher you score, the more you make, the more clients Gena sends your way. As soon as you have built enough clientele in Bay City’s downtown area, new locations begin to unlock and the game continues on.

Of course, City Rush wouldn’t be a proper racing game without the ability to customize your vehicle. You can customize your taxi cab in a variety of ways, and can even change the car model as well. This is another addition that I don’t think most game developers would have gone the extra mile to add. It’s a fun and personalized aspect to City Rush that adds another layer of interest to the gameplay.

I can’t think of a single reason not to play at least a few minutes of Crazy Taxi: City Rush. It’s free-to-play and I can almost guarantee that after playing a few missions you’ll find yourself hooked on the high energy and stimulating gameplay. Fans of the original Crazy Taxi franchise will find themselves riding down memory lane, enjoying the arcade gameplay just like they did as kids, and it will bring new fans in with its pleasant disposition and fun style. I have so little to complain about with this entertaining little game, and I couldn’t be more pleased that Sega decided after so many years to bring the beloved franchise back to life.