It would be hard to argue that Magic: the Gathering was not the most popular CCG on the planet. It’s been going strong for 20 years now because of the excellent tactical gameplay. While many card games end up being pay-to-win affairs, Magic is balanced in such a way that a good player will nearly always beat a player who has simply spent more money on good cards.

If you’ve never played a game of Magic, then 2014 is a great place to begin.

If you’ve played any of the previous Duels of the Planeswalkers game, Magic 2014 will be immediately familiar. You are given a deck to start out with and tossed into the single player campaign against a series of increasingly difficult opponents. Defeating these opponents unlocks more cards and decks for you to use as the game progresses.

You’ll still be tapping lands for mana, sending creatures out to do battle for you, and casting spells to destroy or annoy your opponent. The basic play structure hasn’t really changed in 20 years. But Magic 2014 throws in a brand new campaign, loads of new cards, and a sealed play mode that make this years edition the definitive version of the franchise so far. 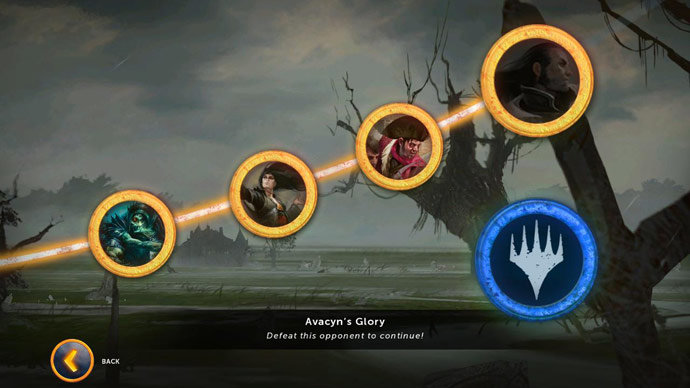 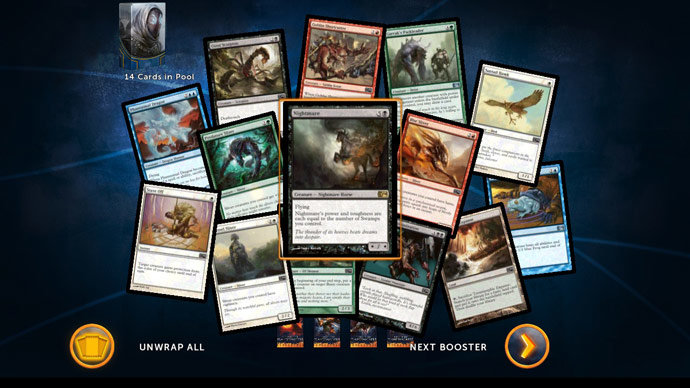 The basic campaign is as good as ever, but the sealed play campaign is where the game gets really good. This mode allows you to build a custom deck from booster packs that you’ll unlock from matches. Unlocking more packs allows you to continue to customize and refine your deck. Unfortunately, your deck from the sealed play section doesn’t carry over to the main campaign.

Magic 2014 looks as good as ever,  but it is essentially just modeling a play surface and a number of cards. Some cards have a bit of animation to them when zoomed in which is a nice touch, and the various spell effects and indicators help you keep track of what is going on and make what is essentially a digital version of setting pieces of paper on a table quite interesting. You won’t be blown away, but the game is great at replicating the Magic experience. Even the enemy players from the campaign look like they were taken straight off of a physical card, so the style is consistent throughout.

How much audio does a card game really need? There’s not a ton of music in the game, just some nice background that sets the mood for two sorcerers casually battling to the death. More important are the sounds that play for various effects and when taking your turn, which give the proceedings a sense of weight and make it feel like you are doing more than just clicking and dragging on little pictures.

Magic 2014 doesn’t really deviate from the model set up by its predecessors. However, people like me who can never find anyone to play the physical game are the target audience. If you’ve been wanting to construct your own decks from sealed booster packs and just play more Magic in general, then there’s no reason not to grab 2014 right away.