Remakes are a finicky endeavor; nostalgic gamers might enjoy updated graphics and sound with their favorite old titles, but messing with classic gameplay elements is a big no-no. For others, remakes are an opportunity to make an old game better, taking the framework and name of the original and dressing it up with modern game mechanics. Contra: Evolution – which finally released in the App Store this week after debuting in China a few months earlier – falls somewhere in between: it’s got the HD aesthetics of a modern game, but also makes disappointing concessions in its attempts to modernize the core experience, transforming a classic action-platformer into a mediocre remake.

There are two gameplay modes in Evolution: Arcade and Mission (that’s right: no two player co-op, either through Game Center or locally on Bluetooth), the latter of which progressively unlocks as players complete levels in Arcade. But don’t be fooled by the name “Arcade”: Evolution is based on the NES original, remembered fondly for its crazy boss fight and the infamous Konami code. Mad Dog and Scorpion return from the original (as well as new, unlockable female characters), complete with their 8-direction movement and run-and-gun style to tackle the game’s plethora of turrets, military baddies, and alien/machine hybrids to escape the South American island that serves as the game’s location. 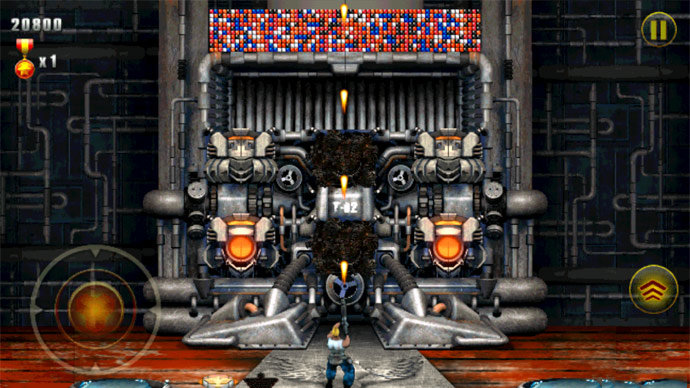 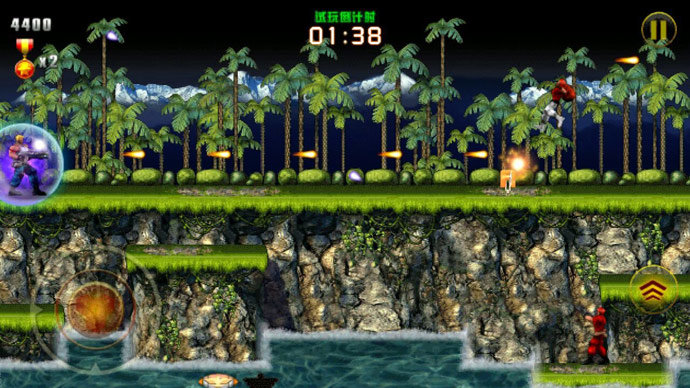 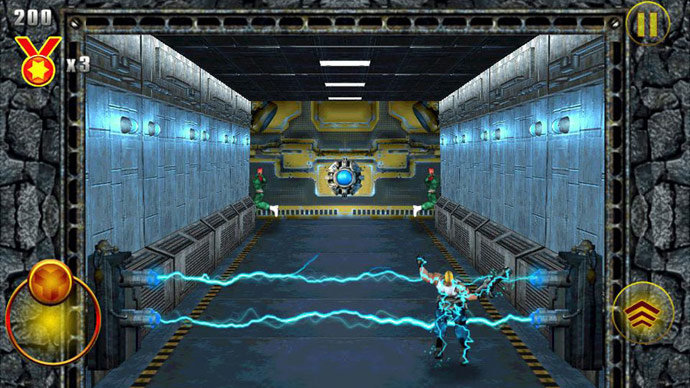 But that’s where the similarities to the original console Contra end: from the scoring system to the game’s controls, Evolution disappoints when it tries to “innovate” or change what was great about the original. The most frustrating of these are the changes made to the game’s levels: most of the original’s levels are shortened, simplified, or even completely cut from Evolution – which may not be a problem for gamers new to Konami’s version of Rambo, but for vets, the changes and simplification are disappointing.

I will admit that making the game a bit easier was probably a smart move: part of Contra’s magic was its precise controls, something that doesn’t translate well to the touch screen. The fire button is completely removed (a smart move, but another letdown for purists), leaving players with a joystick to move their character and a jump button on the right side. The jump button is responsive, but the joystick makes it quite difficult to point the auto-firing weapons in the right direction, especially in tight spots or during hectic boss fights. It’s most obvious with the diagonal directions (which are just awkward to execute while trying to navigate at the same time), but it crops up in the over-the-shoulder maze stages, where I found myself unintentionally pushing myself into the electric lines over and over again.

I will admit that making the game a bit easier was probably a smart move: part of Contra's magic was its precise controls, something that doesn't translate well to the touch screen.

Finally, the IAP’s. Like many modern games, Contra: Evolution allows players to purchase a variety of things to “assist” them on the way. The game has two currencies: coins and crystals, the former of which is earned by beating stages and “leveling up” (gaining arbitrary experience points that don’t really have much point except doling out money), and are spent on consumable like dropping in special weapons in the middle of a level.

Predictably, the crystals can only bought with cash, and control everything from buying better weapons and in-game continues – the lowest form of IAP’s in  paid game, putting the game’s most powerful items behind a pay wall. And remember the 30-life Konami code? That’s been IAP’ed, too, available for the ludicrous price of $50. $50 for a code we all used to enter in five seconds on our NES controllers! That’s just unacceptable.

For what it’s worth, Contra: Evolution’s aesthetics are the most pleasing part of the experience. The jungle levels look great, imbuing the world with lush colors and lively, animated backgrounds. I suppose this is a necessary move – with less action on-screen, more detailed backgrounds become almost a necessity to keep gamers interested. And with this decreased workload, the game predictably runs quite smoothly, with cleanly-animated enemies and no stutters on frame rate on both the iPhone and the HD iPad version (sold separately).

The soundtrack is the one place where this idea of ‘evolution’ really lands well: each of the game’s tracks are remixed from the original’s stages. It maintains the same chest hair and electric guitar-fuelled of its late 80s predecessor, but gives each stage a new sound to match its new look.

Contra: Evolution isn’t necessarily a terrible game, but it’s disappointing to see another beloved franchise fall victim to some of the money hungry tactics all too-familiar in mobile “remakes”. There were a few moments where I felt myself getting sucked back into the bullet and sweat-filled world of Contra, but the awkward controls and incessant attempts to reach into my wallet pulled me out every time.