Designing an endless runner game that catches the attention of the public must be a challenge. The App store is flooded with them, because they are great for quick gaming sessions and they don’t typically require complex inputs from the player.

How does Dead Ahead set itself apart from the pack?

Playing Dead Ahead is incredibly simple. You start the game on a Vespa-style scooter with a .38 revolver, and your goal is to make it as far as you can before dying, like any endless runner. You can move your bike by swiping to avoid obstacles, fire your weapon at running zombies that chase you, or boost, which you are able to do indefinitely. If you are going too fast for comfort, you are able to slow yourself down by hitting small obstacles or zombies in the road, making it easier for you to avoid obstacles but also easier for running zombies to catch you. Finding the balance between breakneck speed and control of your vehicle is the core of the game.

In addition, power-ups are scattered throughout the level, granting things like an invulnerable speed boost, quad damage, or unlimited ammo. You’ll be especially thankful for these power ups early in the game when the boss appears, a hulking monstrosity who chases you down, ignoring obstacles and trying to smash you off your bike. 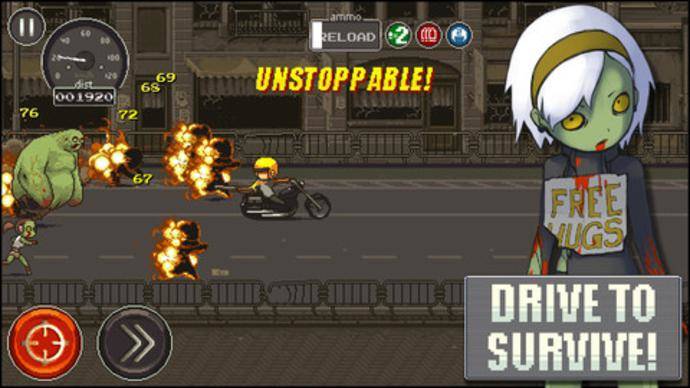 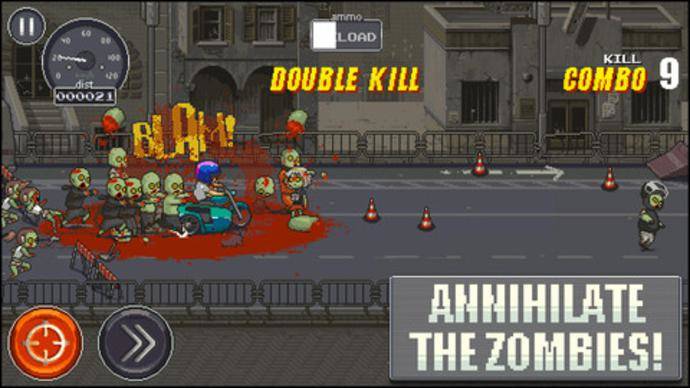 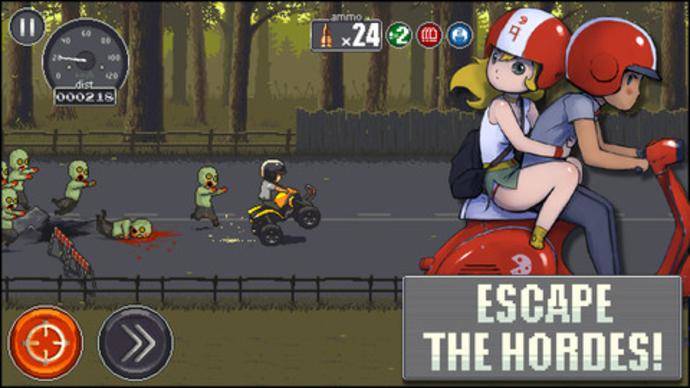 When the round ends, you are awarded coins based on a few factors, including how far you went, how many zombies you killed, and your top speed. You can use coins to buy various one-off items, like a 1000 meter head start or a second chance, but the main money sink is for upgrades.

Save enough coins and you can not only upgrade the stats of your scooter, you can trade it in for a whole new bike. A dirt bike, sidecar bike, chopper and more are available, and each can have its stats upgraded. More weapons are also available to purchase, but to unlock the good bikes, weapons, and new locations you’ll have to rank up by completing little missions. Typically the missions are things like ‘Drive 2000 meters’ or ‘Get a 15 kill streak,’ but as expected they increase in difficulty as you climb the ranks.

If there’s one way to hook me (and many others) into trying your game on the App Store, it’s to give the game some gorgeous pixel graphics, and Dead Ahead does just that. You’ll love the way your coat flaps in the breeze as you cruise down the street dodging cars, and you may even have to stifle a laugh when you run into zombies and watch them pop like balloons filled with red Kool-Aid . The sparks that fly from your helmet as it scrapes on the ground after you crash into a car and flip over the handlebars are a nice touch as well.

The soundtrack reminds me of many different zombie films that you’ve probably seen over the past ten years. It’s a little eerie, but it fits the whole ‘world overrun with zombies’ vibe that the game is presenting. All of the sound effects are great, from the squealing of tires when you are boosting down the street, to the gunfire and the sound of a zombie bursting when you run them over. As a game that you might be playing in small chunks on the bus or train with the sound off, it likely won’t matter, but the fact that the developer put as much work into the audio as they did into the rest of the game is something other developers on the App Store should make a note of.

There are many endless runner games on the App Store, and too many of them are largely forgettable. Dead Ahead is a good take on a fairly stale idea, proving that even if you think you have had enough of the genre you can still occasionally be surprised. Even if you are tired of seeing zombies in every other game, you owe it to yourself to give Dead Ahead a try. Pick it up free on the App Store today!