The Teenage Mutant Ninja Turtles have had a rough run the last two decades; what began as a mid-80s comic book grew into a cultural phenomenon in the early 1990s. Most kids I grew up with had the TMNT lunch box, the action figures, we watched the cartoons… and then over time, with a few bad studio film sequels and a failed live-action TV show, the pizza-loving turtles slowly disappeared from the public eye, save for a few attempted reboots (including a well-received cartoon series, and the recently announced Michael Bay film) over the past fifteen years. So seeing a new Teenage Mutant Ninja Turtles game appear in the App Store was a bit of a surprise – but seeing it be another endless runner unfortunately wasn’t.

Like most games of the genre, TMNT: Rooftop Run is aimed towards the casual audience, but throws in a few advanced mechanics for more experience gamers. After an amusing little cinematic intro, players select one of the four turtles and start running through a nondescript New York, taking out aliens and Foot soldiers along the way with single taps on the screen to either jump or attack. Each run continues until an energy meter at the top of the screen runs out, prevented by defeating enemies and picking up energy orbs along the way.

When the energy meter is filled, it triggers a QTE-like Turtle Time sequence, where players are given a series of areas to tap on the screen in a short amount of time as the turtle kicks ass through a line of enemies with some smooth martial arts animations. Although these only will occur once or twice during any given run, it’s a nice break from the typical run and jump action. 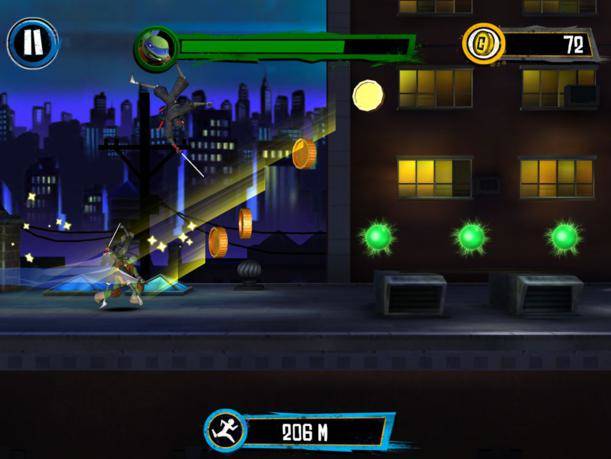 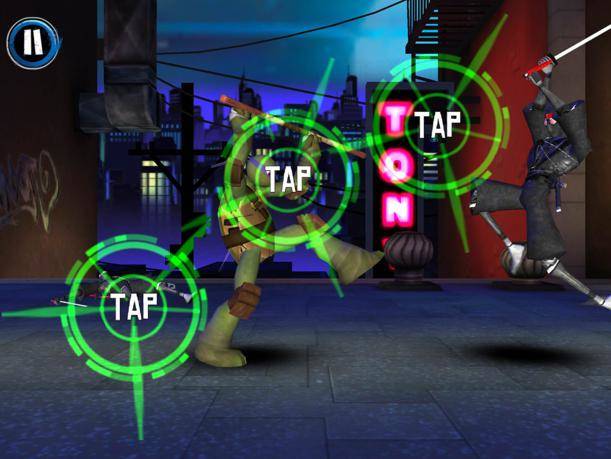 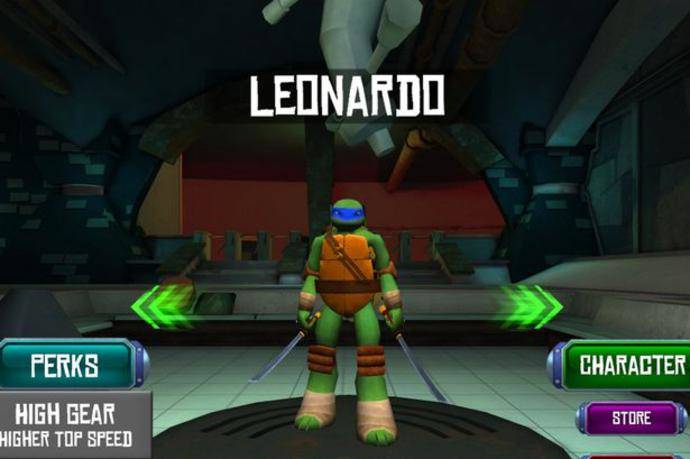 Thankfully, Rooftop Run art design isn’t as limited or vanilla as some might expect from an endless runner. The different levels players pass through are multi-tiered, and those with quick reflexes can catapult from one path to a higher one with a well-timed jump, or by using an enemy as a boost Sonic-style.Unfortunately, the enemies themselves don’t have much personality, most of them bland-looking aliens with the occasional Foot soldier thrown in for good measure.

The gameplay itself is enjoyable – but things become a little less enjoyable when it comes to upgrades and other characters. The game neglects to tell you that after picking a turtle for your first run, you’re stuck with it until purchasing more, which is quite a sum of money earned in-game (or of course, through in-app purchases). Combined with the high cost of upgrades (ranging from gadget upgrades to alternate costumes), it does rob a little of the joy out of the game by adding a pretty hefty grind to advance.

During development, character animation was clearly a priority for developers Kung Fu Factory: the four turtles all look fantastic as they run along walls and interact with the environment (clinging onto a ledge and pulling themselves up, for example). Again, I think the limitations of a endless runner keep the visuals from reaching their full potential, with the blase enemy design and backgrounds, both severely lacking in personality.

In terms of sound, it’s pretty much what one would expect: each turtle has two or three quips they’ll whip out constantly (losing its charm fairly quickly), with an unobtrusive background track that most won’t notice is even on or off. Without the presence of Shredder and Splinter in the game (which is a complete travesty, in my book), it falls on the turtles and enemies to provide all the personality in the game, and their audio doesn’t ever really capture the wise-ass, outcast attitude that once made the series so much fun.

Thanks to its graphics and level design, Teenage Mutant Ninja Turtles: Rooftop Run manages to elevate itself above the typical average runner, despite falling into some of the same traps and confinements of the genre (lack of variety in gameplay, nudging gamers towards in-app purchases in a paid game). An easy recommendation for young TMNT fans; older fans of the series’ hey-day might find themselves disappointed by the lack of anything TMNT-centric outside of the four protagonists.